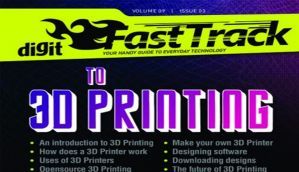 You wake up in the morning to the aroma of breakfast wafting through the house. You groggily walk down the stairs wondering, “Who’s up so early and slaving away in the kitchen to prepare my favourite pancakes?” Nope it’s the ‘Replicator 9000’, the bio-printing device you got yourself a few days ago. It beeps to notify you that the freshly made (or rather, freshly printed) pancakes are steadily rolling out of it. And this is just the beginning of your day. Besides printing food, 3D printing a few years into the future will also enable the production of living tissue (so no more waiting for donor matches for organs), readymade electronics; customised clothing from shoes to belt buckles and perhaps even an entire aircraft.

An Introduction to 3D Printing

The year was 1983. Return of the Jedi fittingly concluded the Star Wars series. It was also introduced under the name Multi-Tool Word and revolutionized text editing. the year the word processor we’re all using (mostly) was It was around the same time that the world was introduced to a machine that behaved in a manner that was completely unlike Microsoft Word, but the change is brought about in the manufacturing process was as big as Microsoft Word’s impact in its field.

How does a 3D Printer work?

Forget everything you think you know about printing, manufacturing, assembling and designing objects. The world of 3D printing has developed in such a way that it disrupts every aspect of conventional product manufacturing. The underlying principles of 3D printing and the printers themselves are moving towards a unified state of turn-key manufacturing limited only by our imagination.

Since the 1980s when 3D printing technology was first implemented it has been called “the overnight revolution decades in the making”. But in the progress that has been made in the last decade has overshadowed much of the dream. From being an industry changing technology that would enable manufacturing to gain new heights, it has instead found its appeal in the hands of individuals, who embody the potential of 3D printing technology through early adoption and experimentation.

For revolutionary technology to be effective, it has to be affordable. The same applies to 3D printers; if it has to change the world, it must be cheaply available to the masses. In this chapter, we’ll take a look at some Open Source 3D printing technology projects that aim to make 3D printing more affordable and bring it into our households.

Make your own 3D Printer

Money no object, we’d all be rolling in 3D printers, albeit while facing some mild discomfort due to the sharp edges and stray 3D prints but rolling in them nevertheless. Since money is the constraint, let’s follow the motto of ‘if you can’t buy it, make it’ and make ourselves some 3D printers!

We’ve already discussed the workflow and elements that go into making 3D printing a revolutionary technology. But beyond its mechanical hardware innovations lies the implementation software that makes it all happen. Over the last few years the prevalence in computer aided design software’s has moved beyond the commercial user segment and into the consumer space. This unprecedented access through free services like Google Sketch Up and other similar initiatives is allowing even casual users a look into what was once a specialised tool.

Getting started and having fun with 3D printing is easy with the wealth of resources available online. The most important resource that will make your journey enjoyable is the access to design files. Whether you’re a professional CAD designer or just a newbie, having access the hundreds and thousands of shared designs from all over the world will allow you to experiment and create original designs of your own. For those of who you wish to return the favour, the same forums are available, to not only share your own creations but in some cases capitalise on them as well.

The future of 3D Printing

3D printers are definitely going to be responsible for the dawn of the third (or 3D) industrial revolution. We’ve come a long way from the first one. Ever since the first industrial revolution, factories, tools etc. have been synonymous with manufacturing – mass manufacturing or otherwise. The notion of modern manufacturing being done without factories is in itself an astonishing one. However, this is exactly what is going to happen as 3D printing reaches individuals and small businesses. We can now build parts, appliances and tools using a wide variety of materials all from the comforts of your home – just create or download a digital 3D model of the object of your choice and with just a click of a button; you can watch your 3D object take shape. The technology has been around for around 3 decades now, but off late however, rapid advances in processing power bandwidth and storage has seen this technology being catapulted into the limelight. Sure to be a force that changes the entire outlook of the manufactur