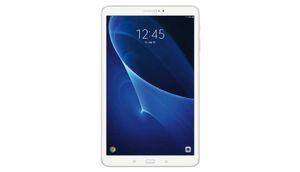 Samsung has launched the successor of Galaxy A tablet called Galaxy A 10.1 (2016). It runs Android 6.0 Marshmallow OS and features a 10.1 inch WUXGA TFT Capacitive multi touchscreen display with a resolution of 1920 x 1200 pixels and 224 ppi pixel density. It is powered by 1.6 GHz Octa core Exynos 7870 processor and supports 2 GB DDR3 RAM. On the memory front, it comes with 16 GB internal memory which is expandable upto 200 GB via Micro SD card, which is more than sufficient enough to store a wide range of photos, videos and music. A host of connectivity options are available on Samsung Galaxy A 10.1 such as 4G, 3G, WiFi, WiFi hotspot Bluetooth, GPS, Micro USB port and a SIM slot. It sports a 8 MP rear camera with Autofocus, LED Flash, Geo-tagging, touch focus, panorama and Aperture f/1.9. A 2 MP front facing camera with aperture f/2.2 is also available for video calling. It incorporates a large 7300 mah battery and Mali T830 Graphics.
Samsung Galaxy A 10.1 comes in two more variants, one is the Wifi Varaint, where the only difference is that it does not have a SIM card slot. Another Varaint comes with an S Pen and supports 3GB RAM instead of 2GB and 32 GB internal memory intead of 16GB. The device comes in 2 colour options – Metallic Black and Pearl white.

None of the iPads in Apple's current tablet lineup supports wireless charging, but it looks like that's about to change soon. According to a new Bloomberg report, the Cupertino tech giant is working on a...

Recently, an alleged Geekbench listing of the Samsung Galaxy Tab S7 Lite was spotted on the benchmarking platform. The listing reveals some key details about the tablet that is supposedly a toned-down variant of the...

Apple is rumoured to launch the iPad 8th Gen's (launched in 2020) successor early next year. A new leak claims that Apple will be selling the next iteration of its entry-level iPad at a cheaper price...