Samsung Gear VR Review: Gearing up for the future 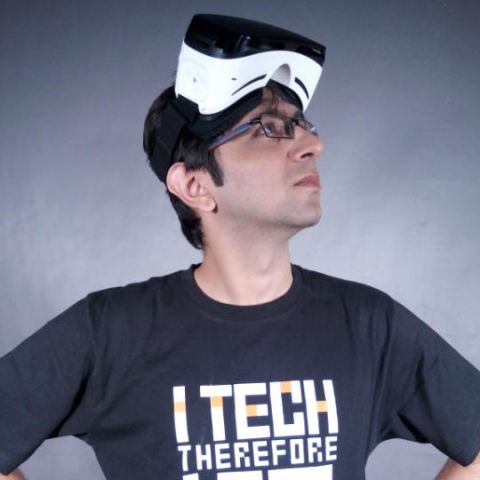 It’s difficult to justify the purchase of the Gear VR if you don’t have one of the six smartphones the device is compatible with. You are better off waiting for a competing headset to launch or stick with the Google Cardboard.

Experiencing a variety of VR gadgets this past week has made me realise how far we have come from the first feature film ever released. The first time the camera panned to take a shot of a moving train was considered as a revolutionary breakthrough for cinema and look where we are today. The same is the case with gaming. The reason Mario had a cap and a moustache was because at the time it was difficult to draw hair and a mouth with the technology at hand, so the cap and moustache would cover those deficits. Today, I’m playing one of the most immersive dog fighting video games in virtual reality.

So yes, technology has progressed a lot and despite some bad tech hitting consumers, (ehem...3D...ehem) we have seen some great technology at the consumer’s disposal. But does VR qualify as great tech for consumers or will it crash and burn like 3D? We experienced a lot of 3D on the Samsung Gear VR and here is our review of the VR headset.

Build and design:
Kicking things off with the build and design of the headset, it’s made mostly of plastic and it feels sturdy. There is a mesh of rubber and Velcro, which ensures a tight structure around the eyes and comfort as well. The headband has Velcro straps that can be adjusted easily. So regardless of how big or small your head is, the headset will fit you. The only con with the headset is the housing where you put the smartphone; the cover that you need to remove feels very cheap and it’s the first thing you will lose. Coming to the connectivity options, only a handful of Samsung smartphones are compatible with the headset and that’s the biggest bummer. You need to own the Samsung Galaxy S6, S6 Edge, S6 Edge Plus, Note 5, S7 or the S7 Edge if you want to use the Gear VR headset and all those smartphones are quite expensive. All the smartphones fit perfectly in the housing, although the Note 5 takes some jostling around. Since the headset connects with the smartphones via microUSB, it’s no surprise that Samsung went with micro-USB instead of USB Type-C with the Galaxy S7 and S7 Edge. 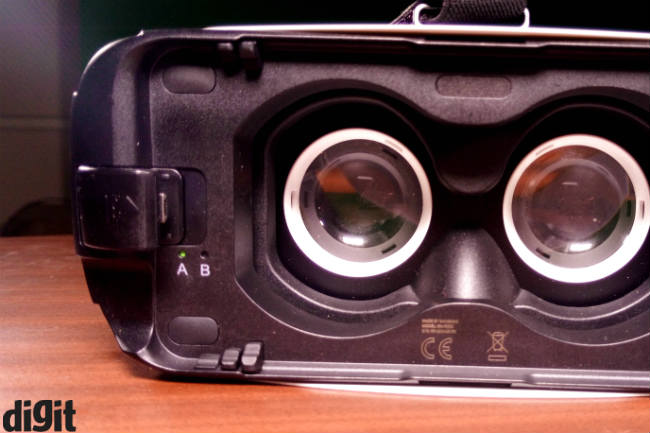 There is a USB port on the Gear VR headset and a touchpad along with the back button rests on the right side. There is a volume rocker on the right too. There is a focus wheel on the top and if you move the focus wheel you can physically see the smartphone move close and far from the lens.

Another reason why the flap housing the smartphone is flimsy is because if you want to see what’s happening in the real world, you can use the smartphone’s camera to do that. For this you will need to remove the flap. For the audio experience, you’d be wise to use a pair of headphones for a more immersive experience. There is space for you to fit the headphones pin into the smartphone. A downside is that L-shaped headphone pins won’t fit and that’s a bummer.

A good thing about the headset is that it is comfortable even for those with glasses. I’ve been wearing glasses for years and having tested some early builds of VR headsets one my biggest concerns was with my glasses. Thankfully, it’s quite comfortable to wear for long hours of use. 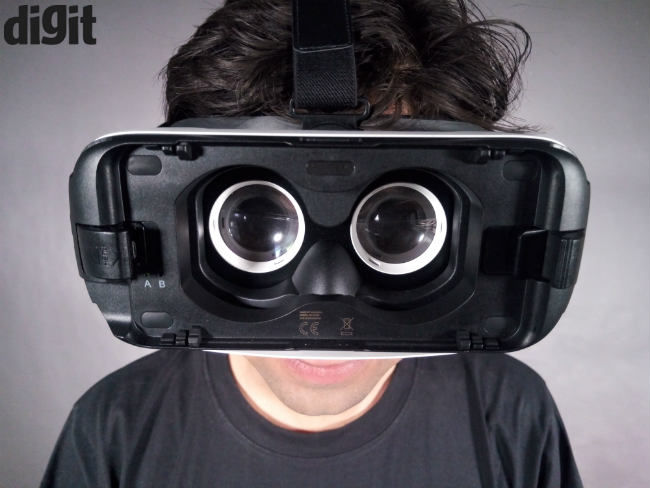 Overall the build of the device is good for its price and a lot better than what we have seen with the likes of Google Cardboard and a few others. It, of course pales in comparison to the HTC Vive, but then again look at the price difference. The device doesn’t have a battery of its own and draws power from the smartphone.

Setting up:
Setting up the Gear VR is a breeze. Put your smartphone in the housing, wear the headset and wait for the Oculus app to download (you can take the phone out of the headset while it’s downloading the app). Once the app is downloaded, you can navigate the menu in the VR headset itself, but we recommend you remove the headset and go through the app on your phone to download games and apps. It’s easier to search for apps and skip pages and type names of the apps you are looking for. This is something you can’t do from the comfort of the headset and is a major drawback. 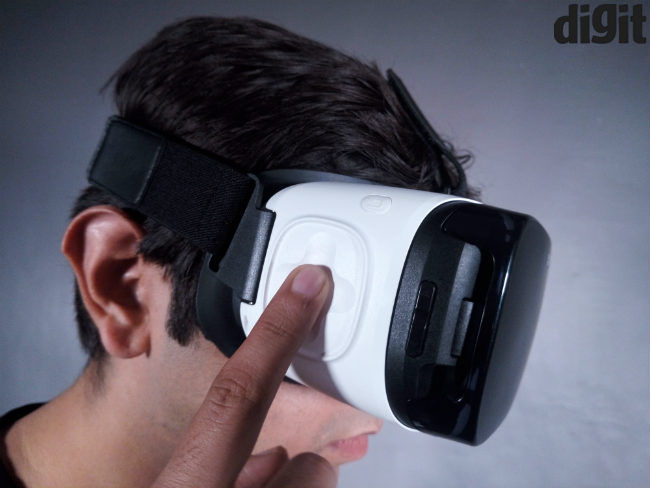 Once the apps are downloaded, you can access them from the Library option in the VR world. A good thing is that you can interact with incoming calls and notifications while you’re in the VR world, although it is more convenient to just pull the phone out of the socket.

Performance:
Let’s get the worst out of the way. You will look silly in public wearing this device and if you think it’s a good idea to wear this on the metro or in the back seat of the car, we’ll say think again. Experiencing a game that requires you to turn your head in the back seat of a car is an open invitation to vomit all over the place (at least for me).

The battery life of the device is subject to not only how much you used it, but also the Samsung phone you are using it with. On an average it consumes 20% of your smartphone’s battery in one hour. We tested the headset with the Galaxy Note 5.

Another downside to consuming content in VR is that you have absolutely no idea what’s happening around you. I’ve hit my hand on my desk while watching Netflix in VR a lot! Also, you won’t be aware of what people around you are doing, which can sometimes be annoying. 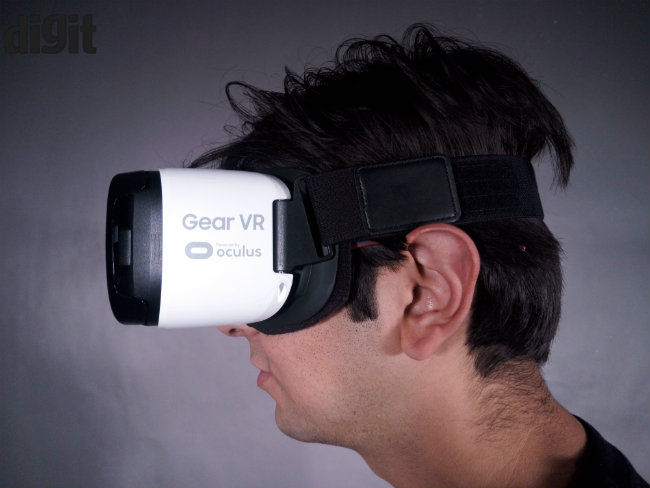 Another downside is that some content looks pixelated at times and despite my efforts to get the image to focus completely, it always seems a little out of focus. That may not be true for those who don’t wear spectacles though, and the pixels do make a difference as well.

But it’s not all bad! There are a bunch of things that you will absolutely love on the headset.

Animated movies like, Invasion, are a treat to watch, and paint a picture of what VR can be capable of in future. Gaming is another area where the Gear VR was a lot of fun. Classic games like Into the Dead and Temple Run, which have VR variants are a clear indicator of the level of immersion VR brings to the table. To put things simply, it’s the same difference you will face when playing Dance Central with a controller and playing the game with the Kinect.

Playing a dog fighting game on the Gear VR was a lot of fun and there is a game called Samsung School of Rugby that will make you go round and round in one spot, literally.

A very good thing about the headset is that you won’t feel nauseous after using it for an hour. Your eyes may take some getting used to, but that’s about it. You won’t be playing this for more than a couple of minutes or an hour at best and most of the content is being designed keeping these limitations in mind. 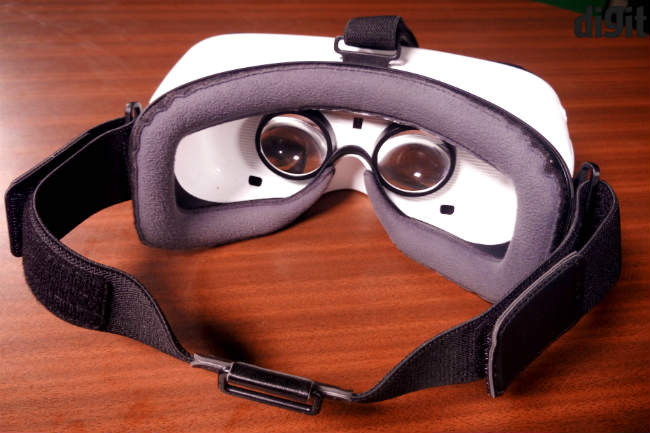 Bottom Line:
It’s difficult to justify the purchase of the Gear VR if you don’t have one of the six smartphones the device is compatible with. You are better off waiting for a competing headset to launch or stick with the Google Cardboard. But if you own one of the Samsung phones compatible then the Gear VR is totally worth the asking price. If you are preordering the Samsung Galaxy S7 or the S7 Edge, then you get the Gear VR free.

The headset isn’t perfect. VR has a long way to go before it’s ready for mass adoption. The advantage that the Gear VR has is that all the processing and display is taken care off on the phone, so what you are left with is a shell with the lenses for VR. I wouldn’t be surprised if just like the PS Move or Microsoft Kinect, the novelty of the Gear VR wears off in a few weeks. What can save the next gen Gear VR from gathering dust in your house is if the small drawbacks we’ve mentioned in the cons are taken care off. Virtual Reality looks like it’s on the right track and it is here to stay.