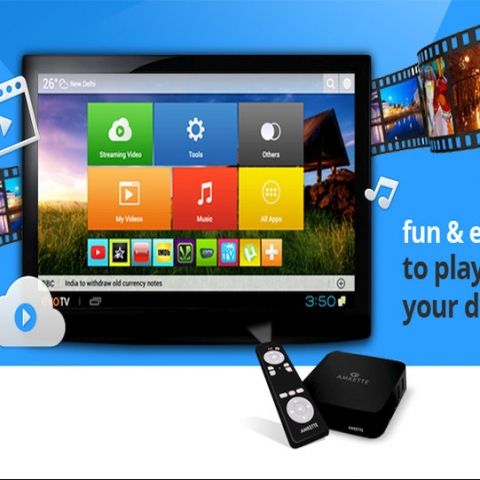 Amkette is trying to make it convenient for users to enjoy their digital content instead of their devices like smartphones and laptops. But is it really worth the buy? Let's find out.

In terms of specs, there is no difference between the two devices except a Rs 1000 price difference. The Android Central edition brings in extra features like an inbuilt microphone, motion gaming sensors and a 700mAh battery on the remote as compared to 350mAh on the MC edition remote.

The Evo TV MC from Amkette which we received was packaged and arranged well. They contain the following accessories:

The accessories are made of a decent quality. They are not extraordinary or horrible - no complaints there. The Evo TV box itself is well-made and feels like a premium product both physically and aesthetically. Its small dimensions of 4.6 x 4.6 x 1 (inches) can fit comfortably anywhere beside your TV. The front of the box has a remote sensor and a blue LED light which shows if the device is powered on or not. The left side of the box does not have any features. The box has 3 USB ports on the right and an extra one on the back. In addition to the USB port, there is an SPDIF OUT port, an AV OUT port, HDMI OUT, an Ethernet port and the power input to connect the adapter. There are small air vents on the right and the back as well in order to keep the box air-conditioned in case of any heating issues.

The most important feature of the Evo TV is that it runs on Android operating systems which makes it more versatile and feature-rich as compared to other digital media centers. Both the MC and the AC editions of the Evo TV feature Android 4.0.4 Ice Cream Sandwich operating systems with customized interface which looks quite good. The box has rounded edges and a matte finish on top.

One attractive feature of the Evo TV is its USB support. It has 3 USB 2.0 ports on the right side and another USB 3.0 port on the back. This lets you plug in flash drives and external hard drives. You can run the drives with High Definition content and enjoy watching movies and TV shows that are saved on your USB drives. The Evo TV comes loaded with apps like MX Player for video playback. Some other notable apps loaded on the Evo TV are BoxTV, Livestation, Rocket Player and other general apps for photos, videos and other media playback. With the power of Android, you can always install more apps as per your liking.

Media playback is great. The box can play videos all the way up to 1080p resolutions without any lags or stutters. It has subtitle support as well. The HDMI-out is a great feature that lets you enjoy content at HD resolutions. The Evo TV supports video streaming through Android apps for YouTube. You can seamlessly pair it with your smartphone and push the videos from your phone onto the Evo TV so that you can watch it with others on the big screen. Once turned on, the Evo TV gives you a comprehensive walkthrough of the interface, as its not really the Android interface that we are used to on our smartphones. The interface has been designed to work in landscape mode with the home screen giving you access to every app through sorted folders.

The home screen gives access to Streaming Video apps like YouTube, Dailymotion etc, ‘Music’ folder for access to all the music playback and streaming, ‘My Media’ for access to all your content in a simple and easy layout, ‘Tools’ for access to settings, and ‘All Apps’, which contains all the apps that are installed on the device. There is a separate menu of apps right below the folders where you can put all your favourite apps for quicker access. It can be further customized with the " " icon on the right which lets you add more apps. The notification bar is located on the bottom. The top right corner features a quick access to the web browser which is quite handy. The Evo TV logo on the left bottom corner is your quick access to the help menu in case you have trouble understanding the interface.

The Evo TV takes around a minute to start and we faced lot of issues while using external hard disks. Sometimes, the system didn't detect hard drives at all, even after a system restart. USB flash drives work better though. Generally, external drives should work fine.

Users can also plug in a webcam which can be controlled and used through the pre-installed Camera app. The Evo TV also supports file sharing via DLNA which lets you stream videos from your laptop. You can also enjoy movies via apps like BIGFlix, Spuul and BoxTV which come preloaded. For music lovers, Amkette has added Saavn, Gaana and TuneIn Radio apps as well. Users can further customize their TV experience with access to millions of apps that are available via the Google Play Store which is a huge plus.

In order to enjoy all these apps though, you would need a really good internet connection for proper video streaming and any other online experience. When it comes to playback via internal and external storage, the Evo TV performs quite well. It also provides easy access to news with RSS feeds and live TV news through apps like Livestation.

The controller of the Evo TV is an infrared sensor-based remote. It has an LED on the top which shows if the remote is on and also shows the battery status of the remote. It can be charged with the provided USB cable or any other micro USB cable. The arrow keys for controlling the sensor direction is present right under the remote's power button which is right next to the LED sensor. The select/OK button is present right between the arrow keys. The usual home keys for Android have been put in the middle of the remote. The home, menu, back and search keys have been provided for the usual Android functions. The lower part of the remote contains the power, mute, MOD (which deactivates the remote) and the rounded buttons for volume control, previous/next and the play/pause for media like movies and music. To make the user experience easier, Amkette has installed a touch sensor on the back of the remote which helps keep the unwanted sensor movement at bay.

One of the most interesting features about the Evo TV is its gyroscope loaded remote controller. It is the only device that can help you move around the interface. The remote is small and handy which makes it fit perfectly in hands. There is an inbuilt microphone in the remote control (in the AC edition only) as well which is quite handy for video calls when a camera is attached to the Evo box. Sadly it is missing in the MC edition that was given to us for the review. The microphone can be used for voice control in Google search while using the Search app of Google.

Despite being the one of most interesting components of the Evo TV, the remote control is quite sluggish while using it to navigate through the interface. Primarily, one of the reasons is that Android is designed for touch-based devices. Using a remote control with an Android-based interface isn't pleasing at all. It takes a while to get used to controlling the remote. And, even after you are used to it, it still feels like the remote isn't really made for this thing. Typing with the remote is a headache and you would most probably end up losing a lot of time just in case you use this device for internet search, chat or any app that needs typing. Amkette says that you can use a wireless keyboard and mouse for a more fluid control.

If you own a Bluetooth mouse and keyboard, then you can use them both with the Evo TV for a much better experience. The mouse gives a better control over the cursor as compared to the remote controller. Typing is made easy by a Bluetooth keyboard and together with the combination of a mouse, you can easily build a fully functional smart system where you can browse internet, watch videos, write documents, send emails and even video chat on a large screen with an additional webcam.

If you are thinking that you can do some quality gaming on this device, then you would be disappointed. It is worth noting here though that the Evo TV is not designed for high-end gaming. With its meager 1GHz single core ARM Cortex A7 processor with Mali-400 GPU, this device is not built for gaming. You can still enjoy some light games. We couldn’t run Temple Run on this one for some reason which would have played reasonably only if the box supported it. Other games seemed to run quite fine but with a considerable lag due to the low-end graphics specs. Playing with the remote is not really a good experience either. Games on Android, just like the operating system, are usually designed for touch controls. Therefore, you can’t really enjoy games on this device with the supplied hardware.

There are other companies which offer similar products like Apple's Apple TV, Google's Chrome Cast, Amazon's Fire TV, etc. Amkette's Evo TV does provide more features as compared to other such products. The areas where the Evo TV wins is that it comes equipped with an internal storage while others don't. It also features more USB ports and due to the flexibility of its Android operating system, it offers much more features as compared to it's counterparts. We would have liked to have a more recent version of Android like Jelly Bean but the inbuilt Ice Cream Sandwich doesn't really disappoint. Still, users will be missing the smoother experience of Project Butter which came only after ICS.

If you want a media center for your TV which provides excellent TV streaming, then go for the Evo TV. You get some useful features such as 4-port USB support and wide choice of apps through Google Play Store which is likely to enhance your TV viewing experience. Don’t expect extra features like gaming from this one. If you own a Full High Definition TV and wish to convert it into a “smart” TV at a low cost, then buy the Evo TV.