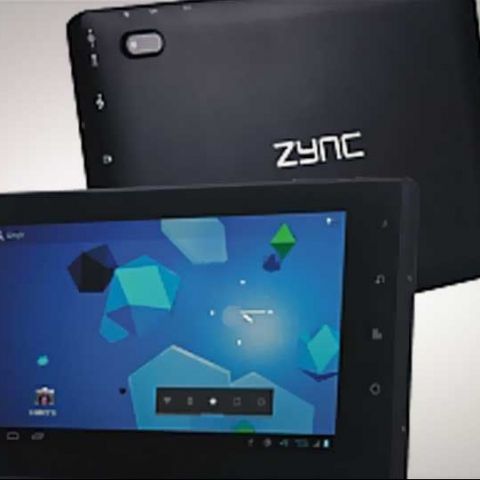 The Zync Z999 Plus is a significant improvement over its predecessor and stands tall among the competition. The addition of Bluetooth and inbuilt 3G along with the ability to make calls add to the feature set of the device but the display could be better. If you are in the market to buy a tablet in the price range of Rs. 10,000 to Rs. 15,000, you can consider this device.

Budget tablets have been around for quite some time now, but their value for money presence has been felt only in the past few months.

The reason for this has largely been that now for a price point of around Rs. 10,000, users have access to tablets that pack in quite a punch under the hood, run on Google Android 4.0 ICS and show off a 7-inch display that is fair enough to get the job done.

But all wasn't well. To maintain the price point, the devices compromised on some key features such as Bluetooth, inbuilt 3G capabilities, and some of them even compromised on the screen quality, camera and build.

Now we have started seeing budget tablets that have addressed these issues while maintaining roughly the same price tag.

Today we have with us the Zync Z999 Plus, the successor to the Zync Z990 Plus. The device is an upgrade in terms of the hardware and features. Is the upgrade worth a look or are you better off with what you have?

Design and Build
Straight out of the box, the device does feel a little superior to its predecessor. Its build quality overall feels premium with a matte finish to the rear giving the device a better grip. The front of the device however still maintains a glossy finish making it a fingerprint magnet.

The rear of the device also has a 2MP camera. The camera isn’t integrated into the rear panel like other budget tablets. It juts out a little and this may not add ergonomic value, but it does add to the look and feel of the device. The front houses the 0.3MP camera for video chat.

Since the Zync Z999 plus run Android 4.0 ICS, there is no need for the presence of physical buttons on the device as the navigation, home and menu options can be taken care from the touchscreen itself. The device however still has three touch sensitive buttons representing home, menu and back. Their addition isn’t a hindrance, it is just that it is redundant duplication of functionality on the face of the device. To the right of the device (when held in portrait mode) rests the volume rocker and the on/off/sleep/wake button.

All-in-all, the device is definitely a step up when compared to its predecessor. The overall feel is nice and the matte

Features and Specifications
Compared to its predecessor, the Zync Z999 Plus has some upgraded hardware under the hood. For starters the device has a single-core 1.5GHz processor but the RAM is still the same at 512MB. The device still runs on Android 4.0.3 ICS, and there is no information on whether the device will be upgradeable to Android 4.1 Jelly Bean. The device has the Mali 400 GPU and supports 3D graphics OpenGL 2.0.

A nice addition to the hardware is that the device now supports Bluetooth. The previous generation tablets scrounged on this feature to cut cost. Even though the Zync Z999 Plus has Bluetooth 2.1, which is an older generation, the existence of the option is nice. The other addition that we really liked was that the device now supports a SIM card. So, not only can you use the device to make calls but use 3G on the go without having a USB dongle sticking out of your device.

The device still sports a 7-inch display but the resolution still is a bit disappointing at 480x800.

The device has a 4200 mAh battery and internal storage of 8GB that is expandable up to 32GB via a microSD card.

Overall, the specifications of the device are an improvement over its predecessor even though they are incremental.

Performance
This is where we’d hoped the improved specifications under the hood would shine and this is where we were left a tad disappointed. You can take a look at the benchmark performance of the Zync Z999 Plus, Zync Z990, iberry Auxus AX02 and the Mercury Mtab Neo2.

In terms of the benchmarks, the Zync Z999 Plus outshone its predecessor quite a bit but not by that far when compared to the likes of the Mercury Mtab Neo2.

In terms of everyday usage, the device worked quite well. One of the best features of the device has to be the keyboard. It was very smooth to type on in both portrait as well as landscape mode. The touchscreen keyboard was very responsive.

The overall performance of the touchscreen too was good. Pinch to zoom, navigation through apps, etc. all felt very good.

Playing games on the device too was fun. Angry Birds, Angry Birds Space and Pool Master Pro ran extremely well on the device without any hiccups. Browsing the Internet on the device was a mixed experience. The websites loaded quickly enough but some rendering took longer than usual. We even used Chrome and the browser, even though it performed well overall, lagged a bit.

The display on the device was a bit disappointing. It is susceptible to a lot of glare and the viewing angles aren’t the best but the colour representation especially in videos is nice. We saw a bunch of movie trailers including The Amazing Spider-Man, the Hobbit and Hotel Transylvania and they all looked and sounded good. The device even played .mkv files without any problems.

The display is a disappointing with its resolution. The 7-inch screen has a resolution of 480 x 800 and we wish this were better.

Another downer for the device is that it isn’t the best multitasker. The RAM is just 512MB and once you have a plethora of apps working, you will see a noticeable lag in the interface.

The performance of the camera on the device isn’t stellar. The rear shooter is 2MP and its performance largely depends on the ambient lighting. The front facing camera just about gets the job done for vice chatting.

The battery life of the device is standard to what you’d expect and doesn’t break any boundaries whatsoever. In our video playback test, the device lasted for 4.5 hours in continuous video playback. We ran a 720p video in .MP4 format.

The overall performance of the device is a notch above its predecessor but it isn’t significant when compared to the other offerings in the market.

Bottom Line
The Zync Z999 plus is a significant improvement over its predecessor and stands tall among the competition. It addition of Bluetooth and inbuilt 3G along with the ability to make calls add to the feature set of the device but the display could be better. If you are in the market to buy a tablet in the price range of Rs. 10,000 to Rs. 15,000, you can consider this device.