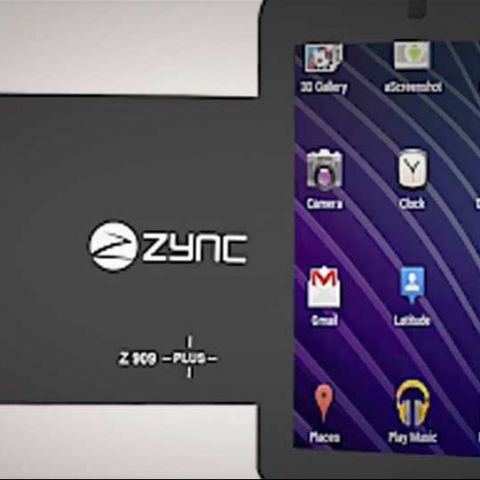 The Z909 Plus is one of the most inexpensive tablets you will be able to purchase in the market at Rs. 3,990 but the value that you will derive from it is underwhelming due to its laggy performance and the resistive nature of the touchscreen. If you are looking to purchase your first tablet, we suggest you increase your budget to Rs. 6,500 and go for the Micromax Funbook or the Zync Z990 Plus priced at Rs. 7,000. For a price of Rs. 4,000, this device will leave you frustrated.

No matter how hard budget tablets try to deliver a complete tablet experience, the lower you go on the price point of a device the compromises get bigger up to a point where the device just becomes an expensive paperweight. The Rs. 7,000 price point seems to be the sweet spot for tablets that deliver a decent experience in terms of power under the hood, display and battery life.

Today we have with us the Zync Z909 Plus. At launch the device was priced at Rs. 5,990 but today the device is available for an MSRP of Rs. 3,990. The device runs on Android 2.3 Gingerbread and has average specifications under the hood. Is it worthy of being your first budget tablet or are you better off looking elsewhere?

Design and Build
Brick paperweight is the first thing that comes to mind when you take a first look at the device. It is heavier that most other tablets in the market weighing 380 grams and is quite thick. It feels really heavy in one’s hands. The rear of the device has a glossy finish to that becomes a fingerprint magnet the minute you remove the plastic cover.

In terms of connectivity, the device has the DC in, headphones jack, mini USB port, microSD card slot and full USB port at the bottom (when held in portrait mode). The device compromises on a rear camera but has a front facing camera for video calling.

In terms of physical buttons the device has a back button on the face of the device, which you could easily mistake for the home button. On the top of the device what appears to be a volume rocker is actually the home and the on/off/sleep/wake button. The volume, menu and back functions can be controlled from the screen of the device itself. These functions are quite frustrating. For example, if we are watching a video on YouTube, and we want to increase or decrease the volume; it cannot be done while watching the video as the touch screen controls for the volume don't appear on screen.

In terms of its physical build, the device seems sturdy but doesn't have the best structure we’ve seen. If you hold the device at eye level, the screen of the device appears uneven. And if you remove the plastic quoting from the screen the display will get scratched with the slightest use of your nails.

Features and Specifications
In terms of the hardware under the hood, the device has a 1GHz processor and 256MB of RAM. It runs on Android 2.3 Gingerbread with no upgrade options to Android 4.0 ICS. The device comes with 4GB built-in storage expandable to 32GB via a microSD card. It compromises on Bluetooth and GPS but apart from Wi-Fi, users can directly plug in their 3G USB dongle to access the Internet on the go.

The Zync Z909 Plus sports a 7-inch display but the resolution still is a bit disappointing at 480x800 and has a 3000mAh battery. Overall, the specifications of the device aren’t too bad for the price you are paying.

As mentioned earlier, the OS has a skin but is light and does little to alter the Android experience. You have access to five customizable home screens on the Zync Z909 Plus and there is a bar at the top of the display that can be dragged down to display the notifications. This bar also houses the home, volume controls, menu and back buttons. It also has a button that lets you take screenshots.

Performance
If the device was a good performer, it would have been a game changing device offering a good Android experience on a budget. Unfortunately that isn’t the case here. The touchscreen on the device is cumbersome and tedious to use. It is laggy and has a very bad response time. The display is resistive in nature and the device doesn't come with a stylus. You will get better response from it if you use your nails.

In terms of the benchmark scores too the device wasn't greatly impressive. On Quadrant it scored as mere 321 and on Antutu it scored 1299. Probably one of the lowest scoring devices we have tested.

In terms of everyday usage, the Zync Z909 Plus works but lacks smoothness. You have access to the Google Play store so you can download the apps you want but running them isn’t the smoothest experience.

A good feature of the device is that it supports a large number of video formats such as AVI, H.264, MKV, MP4, MPEG and more. All the SD videos will run well but the disappointing fact is that the tablets screen lacks vibrancy and the viewing angles aren’t the best. It lacks brightness too. Reading e-books was okay but multimedia playback, though functional was lacklustre.

The keyboard is standard what you’d experience on Android and the experience is as good as it gets on a resistive screen display.

Even though Angry Birds ran on the device its experienced was hampered due to the screen. There were points where the game lagged, but we would overlook that fact if controlling the birds were fun.

In continuous playback, the battery of the device crossed the 3-hour mark which is good for a device with a 3000 mAh battery device.

The overall performance of the device is hampered by the resistive nature of the touchscreen and the underwhelming 256MB of RAM.

Bottom Line
Zync has some good tablets under its belt like the Z999 Plus, Z990 and more. But the Z909 Plus isn’t one of them. It is one of the cheapest tablets you will be able to purchase in the market at Rs. 3,990 but the value that you will derive from it is underwhelming due to its laggy performance and the resistive nature of the touchscreen. If you are looking to purchase your first tablet, we suggest you increase your budget to Rs. 6,500 and go for the Micromax Funbook or the Zync Z990 Plus priced at Rs. 7,000. For a price of Rs. 4,000, this device will leave you frustrated.