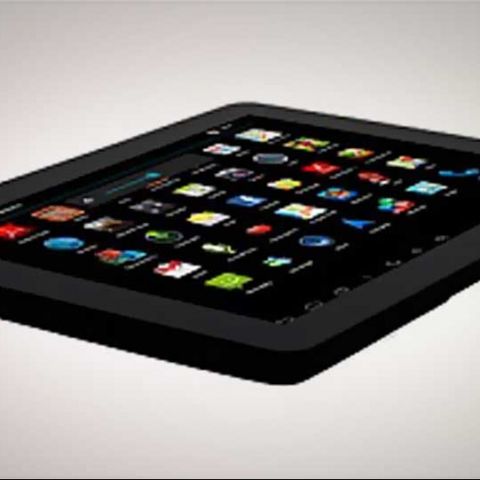 If a large display on a budget is your requirement, then you should consider the Zync Z1000. It has really good battery backup, and a display and resolution that are better and crisper than the Micromax Funbook Pro's display. The availability of a SIM card slot is nice and the fact that it makes calls is an added bonus as well. However, bear in mind, visual real estate aside, there are a plethora of 7-inch tablets available in the market that perform better than the Zync Z1000 and are cheaper as well.

Today we have with us the Zync Z1000, a tablet that boasts of a 9.7-inch display while maintaining the specifications under the hood that we have already seen. Is it worth a second glance?

Design and Build
Placed next to an iPad (third generation), the length and breadth of the Zync Z1000 appears to be the same to the naked eye. It is however thicker than the iPad. The front of the tablet is clean with no physical buttons. All it has is the front facing camera. The location of the front facing camera is in the top right hand corner (when held in landscape mode) and feels slightly inconvenient especially if you are one who shifts orientation while video chatting. When held in landscape mode, your thumb can easily cover the camera.

All the ports of the Zync Z1000 are neatly laid out on one side (right side if held in landscape mode). You have the on/off/sleep/wake button, charging port, HDMI out, two microUSB ports, microSD card slot and the DC in. A SIM card slot rests behind the HDMI port. There is no instruction on which side the SIM card should be facing and it is inconvenient to insert and remove the SIM card.

The top of the Zync Z1000 has the volume rocker and a back button. The back button is sort of useless since the device runs on Android 4.0 ICS and the home, back and multitasking buttons are ever present on the face of the device.

Unlike other tablets, there isn’t a plastic border around the Zync Z1000’s display. It has the glass panel that extends from the display onto the border. It isn’t ground breaking, but it is a little different than what we are used to seeing.

The back of the Zync Z1000 has a glossy black finish that will get littered with your fingerprints from the minute you touch the device. The rear also houses a 2MP camera.

For a tablet priced at Rs. 10,990, the Zync Z1000 is a well-built device. It is slightly on the heavier side at 650 grams, but that isn’t a bad thing as it is still comfortable for prolonged use.

The design of the Zync Z1000 may still feel a little odd to some. That's because the aspect ratio of the display is 4:3.

Features and Specifications
Straight out of the box, the Zync Z1000 runs on Android 4.0.4 ICS. The official product website claims that it can be upgraded to 4.1 Jelly Bean which is a very good thing. Up till now, we have seen the WickedLeak Wammy Desire (read our review here), a budget 7-inch tablet run Jelly Bean straight out of the box.

For the most part, the UI of the Zync Z1000 is stock Android with a minimalistic skin that won’t make a difference to most users. If you want access to the plethora of apps available globally, you can get that from the Google Play store. And the device has the potential to run almost all the apps from the Play store.

As mentioned earlier, the Z1000 also has a SIM card slot that not only gives you access to data transfer but to make calls as well. You will do better off using a headset, as the device is unusually large to hold near your ear (though there is no earpiece on the device). It does have a loudspeaker but then, it obviously isn’t the most convenient way to speak in public.

In terms of the specifications under the hood, a 1.5GHz processor and 1GB of RAM power the Zync Z1000. The 9.7-inch display has a resolution of 1024x768, which is better than the 1024x600 resolution of the 10.1-inch Micromax Funbook Pro. The tablet has built in storage of 8GB expandable up to 32GB via a microSD card. The resolution of the front facing camera is 0.3MP.

Overall, the Zync Z1000 seems like a good device on paper. But does the performance deliver?

Performance
Starting with the display, the Zync Z1000 establishes itself quite impressively for a Rs. 10,000 table. We ran a few games, apps and videos and the device performed quite well. The representation of colours was nice and we were quite happy watching movies on the device. Having said that the device is very reflective and susceptible to a lot of glare. The viewing angles aren’t the best either and you have to hold it at a particular angle to get the perfect view. The brightness of the display is good but don't expect it to be a performer in direct sunlight.

All video formats ran very well on the Zync Z1000. 1080p HD .MKV files played back smoothly, and navigating on the timeline was seamless. The size of the display certainly helped. A good experience overall. The only disadvantage comes with the aspect ratio of the tablet. Since it is 4:3, there is a lot of screen real estate that is wasted because of the black bars.

The audio output from the Zync Z1000 was surprisingly good. At full volume, there was little distortion and the audio is overall clear.

Looking at the benchmark performance of the Zync Z1000, one must say the scores weren’t very impressive, however, they weren’t the bottom of the barrel either. The Z1000’s hardware is the same as other budget 7-inch tablets. Below are the benchmark score comparisons against the Micromax Funbook Pro.

As you can see from the above scores, the raw performance of both the Micromax Funbook Pro and Zync Z1000 is nearly neck on neck, with one evenly outscoring the other in half the tests.

The keyboard on the Zync Z1000 is stock Android and is a bit disappointing, despite a good layout. In landscape mode it may be difficult to type with two fingers considering the 9.7-inch display but the same is the case in portrait mode. When you start typing for the first time on the device, you will get haptic feedback with every key you press. This is quite irritating and you will find yourself switching off this feature very quickly via the settings. The response of the touchscreen isn’t the smoothest as well. We don't expect it to respond to a feather touch but there are times when you have to press hard at the display and this is a bit of a downer.

Transferring data from your Mac or PC to the Zync Z1000 is as simple as plug, copy and paste.

Playing games on the Zync Z1000 was fun, and the device ran the games we installed from the Play store without a hassle. Games such has Angry Birds Star Wars make good use of the large screen’s real estate.

Browsing the internet on the Zync Z1000 was surprisingly good. It is comfortable to read text on the large display and double tapping to zoom makes the text auto adjust on the display. The screen is nice for prolonged browsing and reading.

A whopping 7,000mAh battery powers the Zync Z1000 and this is where the tablet is a definite performer. In the continuous video playback test, it lasted for about 6 hours, which is very impressive. You can expect the device to last through the day with ease, with above average use.

There is one problem that we faced with the overall performance of the Zync Z1000 – the overall performance of the interface was lag-ridden. From the apps listing page loading, to typing the text, everything took a heartbeat longer than we’d like and this led to some frustrating experiences. Even while typing, we’d reach the third or fourth alphabet and the first still hadn’t appeared on screen. We tried factory resetting the device a few times but the problem persisted.

Bottom Line
If a large display on a budget is your requirement, then you should consider the Zync Z1000. It has really good battery backup, and a display and resolution that are better and crisper than the Micromax Funbook Pro's display. The availability of a SIM card slot is nice and the fact that it makes calls is an added bonus as well. However, bear in mind, visual real estate aside, there are a plethora of 7-inch tablets available in the market that perform better than the Zync Z1000 and are cheaper as well.