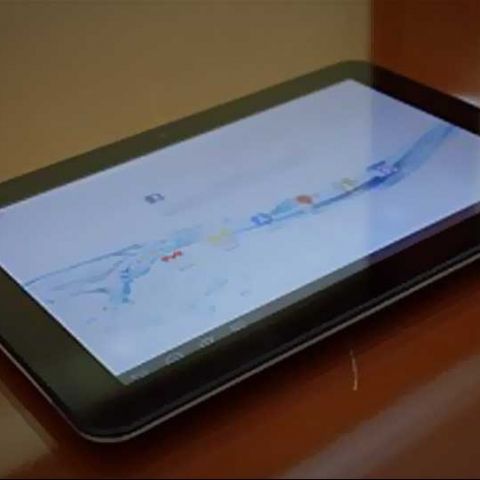 The Spice Stellar Pad is a great budget Jelly Bean tablet, perfect for those looking for an affordable 10-inch Android device with solid overall performance. It has good power under the hood, an impressive display, good touch response and clear audio. Sure, it is plagued with some lag and crashing apps, but that is found on all budget tablets. We have finally found an awesome budget Jelly Bean tablet. If a smaller display is what you require, then there are several good options available in the market, such as the iberry Auxus CoreX2 3G tablet.

We have already seen the iberry Auxus Core X2 3G, a very good budget 7-inch tablet. We have also seen the EAFT Destiny D90T tablet that has a 9.7-inch display and but runs on ICS and is a good performer.

Today, we have with us the Spice Stellar Pad Mi-1010. On paper, the specifications of the device are quite impressive. Does it match our expectations?

Design & Build
The one thing that we expect from budget tablets is an average build quality at best. We have seen the occasional tablet that has impressed us with a good build and the Spice Stellar Pad falls in that category.

To start with the front of the Spice Stellar Pad Mi-1010 has a 10.1-inch display and the front facing camera. No physical buttons and that is a good thing. The front facing camera is in the centre of the border when held in landscape mode making it more convenient that the corner placement we have come to expect from other budget tablet.

The top (when held in landscape mode) has the power button and the volume rocker. All the ports are neatly laid out on once side. We have the microSD card slot, reset button, DC in, HDMI-out, micro USB port and the headphones jack. Seems pretty standard so far doesn’t it?

Now, moving to the rear of the Spice Stellar Pad Mi-1010. It has a plastic back with a smooth metal finish, which feels really good and premium. The rear has a distinct curve i.e., it is slimmer at the top where the camera rests and is slightly thicker at the bottom. The tablet feels slightly heavy at 667 grams and isn’t the slimmest at 10mm thin, but it feels really sturdy and well built in ones hands. It’s probably one of the better-built budget tablets that we have.

Overall, it’s a lot better built than the Zync Z1000, the Funbook Pro and the EAFT Destiny D90T.

Features & Specifications
From the word go, the Spice Stellar Pad Mi-1010 runs on Android 4.1 Jelly Bean and that is very good. You have all the features of Android including Google Now at your disposal making this device fun to use. There is a very minimalistic skin on the device similar to the ones we have seen on other Spice devices such as the Stellar Horizon and the Craze. The skin really isn’t any hindrance but if you’d like, you can download a free launcher from the Play store. There is no SIM card support on the tablet.

For the specifications, the Spice Stellar Pad Mi-1010 has a 10.1-inch IPS display with a 1280x800 pixel resolution. Under the hood, a dual-core 1.5GHz processor long with 1GB of RAM powers the device. It has a whopping 16GB built in storage expandable up to 32GB via a microSD card. It has a behemoth 7600mAh battery.

There aren’t any noteworthy preloaded apps on the Spice Stellar Pad Mi-1010 and you have access to the Google Play store to satisfy your app needs.

So far, we love the build of the device and the specifications. Now let us take a look at the core performance of the tablet.

Performance
The one thing that really disappoints us when it comes to tablets is the response and some performance issues with the touchscreen. The only problem with the display of the Spice Stellar Pad is that it is glossy and here we are nit-picking. It is a great display with a good touch response. It is no iPad when it comes to typing, but it is way better than the EAFT Destiny D90T we tested earlier on.

The 10-inch screen has a resolution of 1280x800 pixels, giving it a pixel density of 149.95. This isn’t the best but is really good. Reading text, browsing the Internet, playing games, all looked great on the screen. And the viewing angles of the screen to are very nice. For the entire duration of using the tablet, we had the brightness cranked up to full.

The audio from the Spice Stellar Pad Mi-1010’s on-board speakers is also something to talk about. It is very loud, and clear. Be it videos you have copied on the device to YouTube and even the apps. We really liked the speakers on this device.

The overall performance of the Spice Stellar Pad Mi-1010 is smooth. Sure, it is plagued with the same slight hesitation and lag found on all budget Android devices, but it was far less when compared to the other budget devices that we have seen. The hardware under the hood is good and Dead Trigger ran and loaded swiftly. We did face the occasional frame rate drop when the action on screen got quite intense, but the touchscreen was really good for the controls to work well on.

Apart from Dead Trigger, all the other games we played on the device such as Angry Birds Star Wars, Subway Surf and more ran quite smoothly and we were really happy with the performance.

The Spice Stellar Pad Mi-1010’s hardware under the hood is on the same grounds as the ICS powered EAFT Destiny D90T and the Jelly Bean powered iberry Auxus CoreX2 3G tablet. Below are the benchmark scores of the three tablets.

As you can see from the above benchmark scores, all the devices are nearly neck on neck when it comes to the scores. There are places where each has its own distinct advantage but not by a very large margin.

Transferring data from your Mac or PC to the Spice Stellar Pad Mi-1010 is as simple as plug, copy and paste. A whopping 7600mAh battery powers the Spice Stellar Pad MI 1010 and this is where the tablet is a performer. In the continuous video playback test, it lasted for a whopping 6.5 hours. That is truly impressive. The location services were on, brightness was on full and so was the volume. The battery on the device is very impressive.

Bottom Line
The Spice Stellar Pad is a great budget Jelly Bean tablet, perfect for those looking for an affordable 10-inch Android device with solid overall performance. It has good power under the hood, an impressive display, good touch response and clear audio. Sure, it is plagued with some lag and crashing apps, but that is found on all budget tablets. We have finally found an awesome budget Jelly Bean tablet. If a smaller display is what you require, then there are several good options available in the market, such as the iberry Auxus CoreX2 3G tablet.