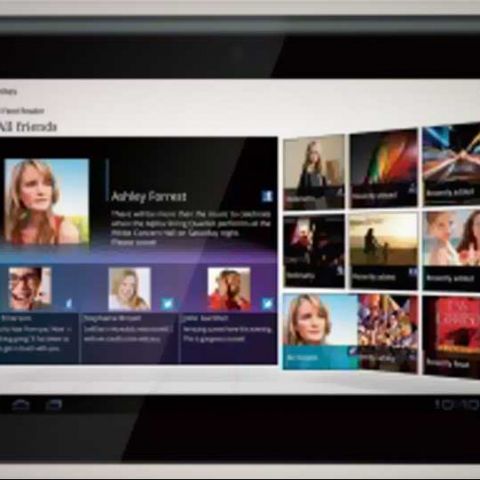 Fashionably late to arrive for the tablet war bloodshed, but we donï¿½t really mind. The Tablet S catches your attention with the excellent performance, unique design and interesting extra features like the Universal Remote and the PlayStation app. However, Sony needs to address the issue of internal storage space available - only about 9GB is available for the user out of the 16GB. If it is an Android tablet you desire, you now have the choice between this and the Samsung Galaxy Tab 750. Else, if you still want the best tablet around, spend the cash on the Apple iPad 2.

Not long ago, we had mentioned how tears of joy had welled up in our eyes when we saw the performance and the slim package of the Samsung Galaxy Tab 750. And quite rightly, we reckoned it was the closest an Android tablet got to an iPad 2. What a difference a month or so makes. The Sony Tablet S strides through the door, dressed smartly and looks like it comes from the tablet’s equivalent of a gym!

Look & Feel
The design of the Sony Tablet S is inspired by what a folded around (open, in simpler terms) magazine looks like. In a world full of similar looking tablets, this unique design does stand out considerably. While reviewing the Sony Tablet S, we noticed that on the thicker side, the plastic smoothly curves downwards, and continues to the rear panel. This curve ensures that it isn't uncomfortable to hold. Since the orientation will rotate in any direction, you can hold the tablet in the right or the left hand, with equal ease. The thick part melting into a thin panel on the other side of the tablet means that if you place it flat on a table in landscape mode, the slight incline/ elevation makes typing very comfortable.

Admittedly, the Sony Tablet S isn't the slimmest tablet around. But the form does deceive a certain bit in the beginning, and you pick it up with more force than needed. Mostly because you might be thinking that it is heavy, heavier than it actually is. The iPad 2 (Wi-Fi) weighs 601 grams, and the Tablet S weighs 598 grams. The Tab 750 steals the march though, weighing just 565gms.

The key and port placement is slightly weird, due to the different design. The power key, along with the volume rocker is in the right side indentation, while the 3.5mm port, the USB port and the SD (yes, you read that right!) card slot is on the left side indentation. The proprietary charging port is on the thinnest part of the Tablet S, on the panel below the display, in landscape mode. Do not like the brick adapter though - we aren’t carrying a laptop, are we?

The Sony Tablet S is dressed in a glossy black finish, on the complete plastic panel. Very high quality plastic though, and we didn’t feel any flex on any part of the tablet. The glossy finish will be a scratch magnet though.

Features
No shortage of power. Sony has ensured that the Tablet S has adequate power always. A 1GHz dual core processor, and 1GB of RAM power the tablet. The version that Sony has launched in India is the 16GB one, with Wi-Fi only.

However, the real goodness begins here. The Sony Tablet S has the “PlayStation certification”. What you get on board are the PS classics - Crash Bandicoot and PinBall heroes. However, the promise lies in the potential - Sony’s huge library of PSP and PS3 titles should make their way to the tablet in a few months time. This is really the first time any Android tablet has flexed its gaming muscles.

The universal remote application relies on the RF sensor that Sony has thoughtfully stuffed in the Tablet S. It should, in theory, control any gadget that has an RF remote control, so long as you can either configure the preloaded remotes or make the app learn that particular remote.

Sony hasn’t gone for the full-blown customization of Android - neither with the 3.1 nor with the 3.2 that the review unit came with. What they have done is slightly tweaked the UI and added certain widgets and shortcuts to the home screen. However, beyond that, the apps menu has been completely redone, and admittedly, looks better and livelier than before.

Performance
The combination of a powerful dual core processor and 1GB RAM means using Honeycomb is a delight to use. The slickness of the interface can also be attributed to the light mods that Sony has deployed on the UI. We have seen instances of overdoing it hinder performance considerably, time and again.

Most visible when you are swiping between screens - no slowdowns or screen tearing type feel. Speaking of which, the touch response is absolutely fantastic, equally comfortable to use in both portrait and landscape mode, with the finger or the thumb!

The 9.4-inch display puts the Tablet S in what we loosely call the “10-inch tablet” category. No fancy display tech here - just a simple TFT LCD, but the brightness levels as well as the colour depth was delightful. The white colour levels are quite good as well, something that has disappointed us in a lot of other potentially good Android tablets. During the Sony Tablet S review, we also played some videos. Well, it was a heart-warming experience - the entire warmth of colour and smoothness of the fast moving images was just brilliant. However, Android still cannot playback a lot of video files due to codec incompatibility issues. Downloading the free MX Player along with the separate codec package (with the same name) solved the problem. The built-in speakers are quite loud, and clear up to a volume of about 60%. Beyond that, the jarring is quite audible. But then again, we would recommend using a good set of earphones for headphones with almost any tablet.

While they were tweaking the Honeycomb UI, Sony also threw out the original on-screen keypad and replaced it with an absolutely delightful version of their own. Using it was an experience of comfort closest to the Apple iPad 2’s on-screen pad. When you select fields like passwords, the number pad is automatically added on the right side corner, just helping speed up the entry process.

The web browser turned out to be another delight during the Tablet S review. We found absolutely no fault with the page rendering quality, and the speeds at which that was done.

Sony has preloaded the Tablet S with quite a few unique apps. The first of which is the Sony Select app - where you find a few handpicked apps for the tablet. This works parallel to the Android Market. We did find quite a few display bugs in this app - slide wont change, one slide would end up with the text from the previous one still visible, and the sluggishness of the entire app in general. Another problem we faced during the Tablet S review was with the PlayStation app. Every time we attempted to open the app to download more titles, it would ask us to download some identity manager, and direct us to that download on the Android Market. But ever single time we did that, we got the ‘download not found’ error.

However, all is not bleak with the preloaded apps. The universal remote app is an absolute delight to use. Apart from a whole lot of preloaded remotes for various devices, you can also make it learn any remote. Apart from the usual suspects - TV and Home Theater, we even got it to learn the remote of the Samsung air-conditioner in the room, and worked flawlessly every single time. A very very useful app to have, if half of the space on your coffee table is taken up by various remotes!

Why there is no HDMI port is because of the DLNA “throw” feature that Sony is promoting. The idea is to be able to “throw” any video from the tablet on to a compatible (read - connected on the same network as well) television and enjoy it on a bigger screen. For those who don’t have a network-connected television just yet, the omission of the HDMI port is like the future that has come a bit too soon.

When we got the Tablet S for review, it came with the Android 3.2.1 version. Sony rolled out this update for those who had purchased this with the Android 3.1 version. A couple of days of using it, and there was a 14MB system update. Duly downloaded and installed, but not too much performance difference. Good thing, for it didn’t deteriorate in any way either! But there was a problem we had hoped it would solve, but didn’t. The problem we are talking about relates to playing back some music, and then changing the tablet’s orientation. Every time the orientation changes, the music stutters for a second. Secondly, no e-book reader app was able to handle e-magazine PDF files smoothly. While reviewing the Tablet S, we used the same 80MB PDF file of a magazine on the iPad 2 as well, but the jerkiness, stutters and sudden coma was a regular occurrence! For a tablet that handles heavier video formats with aplomb, this is an unexpected disappointment.

The battery life of the Sony Tablet S is better than most of the Android tablets - Xoom and Iconia A501 in particular. The battery will let you watch videos for 4 hours continuously, with Wi-Fi connected in the background. If you use this for a bit of web browsing, e-book reading and not a lot of videos, this can easily last you between 3-4 days on a single charge.

Our Take
In terms of sheer performance comparison, it is touch-and-go between the Sony Tablet S and the Samsung Galaxy Tab 750. Both have their own uniqueness when it comes to the form factor. It is a very close call between the two, except the Tab 750 also comes in a 3G version. We would recommend checking both of these tablets before making up your mind.