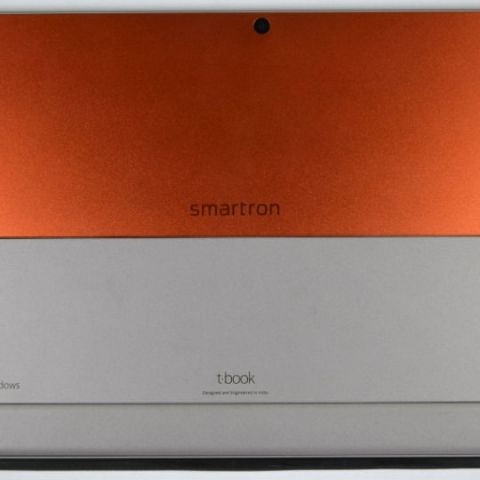 The Smartron t.book tries to take on the Microsoft Surface Pro 4, and gets a lot of things right. The keyboard and touchpad need work, but the product is definitely worth the Rs. 39,999 price tag that the company has chosen for it.

Wars usually include two opposing sides, and then a third side that tries to take advantage of it. History has too many examples of this phenomenon. Over the past year, Apple and Microsoft have chosen India as one of the battlegrounds for their “tablet to replace your laptop” conflict. The third party involved? A certain Indian startup, called Smartron.

The Smartron t.book aims to be what the Microsoft Surface Pro 4 is, but at less than half the price. The product costs Rs. 39,999, which is less than half of what the Surface costs, and needless to say, it had us interested from the start. What remains now, is whether the compromises for the price cut are justified.

Build and Design: For what it's worth..

Whether you like the Smartron t.book’s looks will depend on personal choice, but the device does look quite unique. It has a metallic construction, with front-firing speakers on the top. The front camera rests between the speaker grilles, along with two USB 3.0 ports to the left of the device, and the USB-C and micro-HDMI ports below them. There’s also a microSD card reader on this side. The headphone jack resides on the right side of the device, towards the bottom. 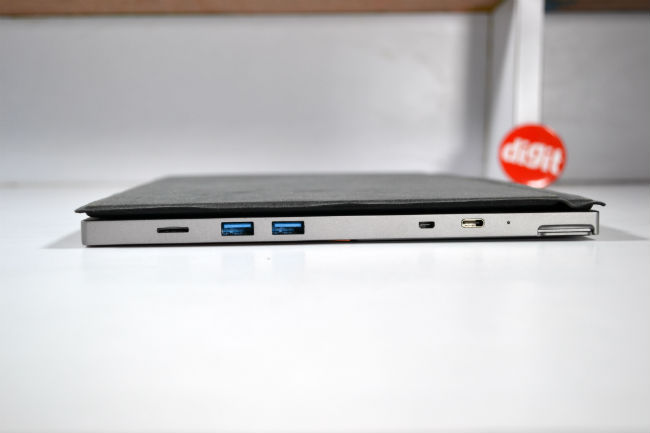 The tablet itself is built quite sturdily, but I can’t say the same about the kickstand. Made of magnesium allow, the kickstand seems somewhat flimsy, and doesn’t really conform with the rest of the device. That said, it’s perfectly acceptable at this price. I reached a crossroad here. While the kickstand hinge is tough, it also doesn’t allow the t.book to be placed in too many angles. Of course, I’m not expecting a Surface-level kickstand here, but a little more flexibility would have been nice.

For the most part, for desks, the t.book’s kickstand is good enough, and definitely better than Apple's solution with its new 12.9 inch iPad Pro and 9.7 inch iPad Pro tablets. It doesn’t remain stable when you place it on your lap, or even on soft mattresses, but for the price, I’m not really complaining. It’s heavier and thicker than a Surface Pro 4, but that doesn’t get in the way of usability. 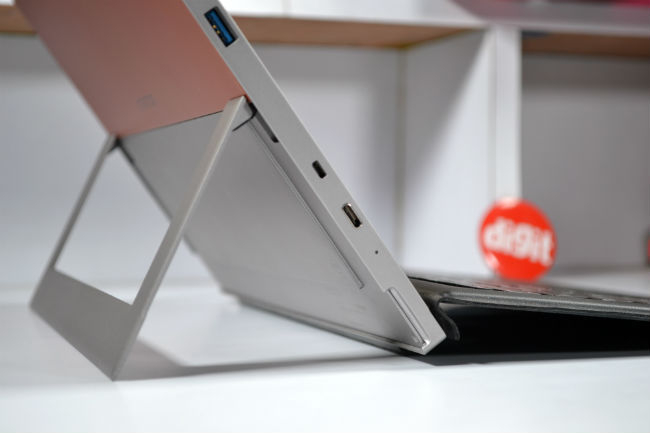 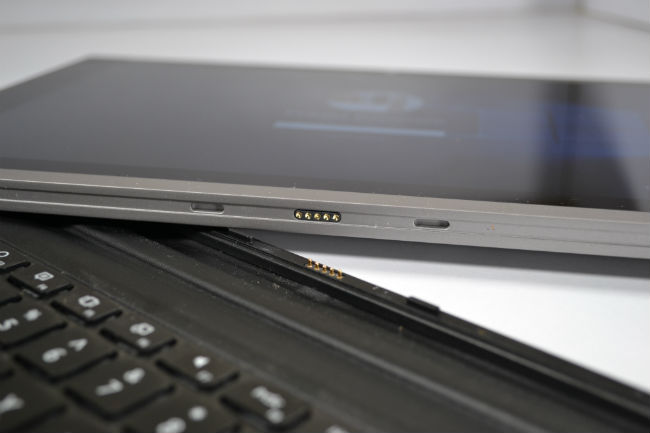 Smartron gets a lot of things right with this 2-in-1, starting with the display. 2K displays are hard to find at this price, with the Asus UX305 being the closest laptop. The UX305, however, costs Rs. 49,999. Resolution aside, the 12.2-inch WQXGA display also does well with colours, and viewing angles are good enough for me to use this as my daily driver.

That said, the screen is slightly dim and reflective, which is an issue if you’re using the t.book out in sunlight or open cafes. I kept the display at 75% brightness usually, and it was enough indoors. 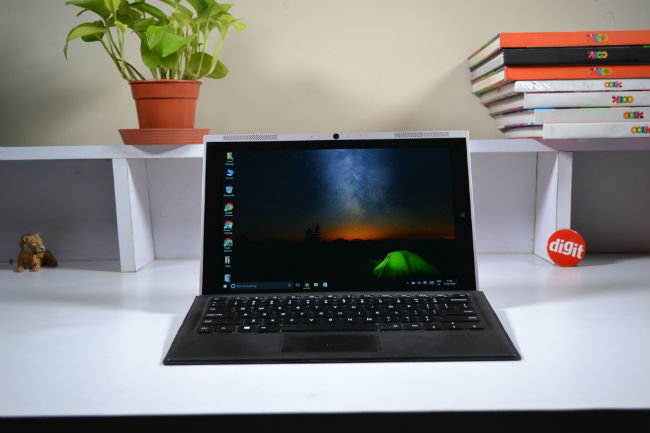 The good thing about the t.book’s keyboard is that button placement is done well. The pitch is good, so that you don’t end up pressing the wrong buttons when you use it for the first time. There are some small, but important compromises.

For one, there’s no volume up/down keys on the keyboard, which is annoying when you’re watching movies or videos. In addition, key feedback isn’t great, and the keyboard often doesn’t register key presses. For example, the Shift key often didn’t register key presses when pressing Ctrl+Shift combinations. The same happened with letters, while typing. 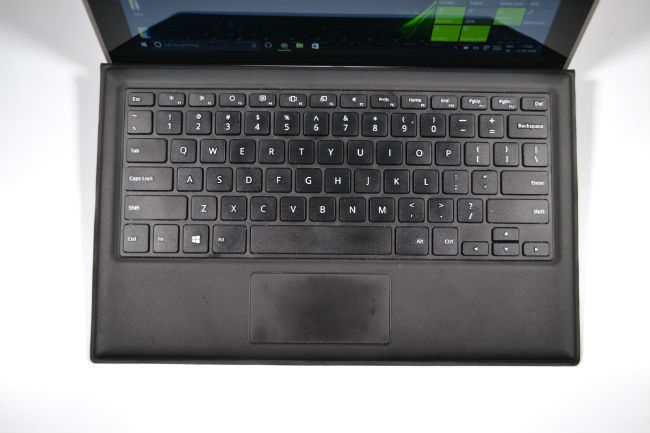 But, while I can still make do with the keyboard at this price, the touchpad, I cannot. The fact that it isn’t big enough can be excused, but it registers Windows gestures and button presses even when trying to simply move the cursor. It’s really annoying, especially when you drag the cursor to switch tabs and Chrome ends up being resized.

It’s also worth noting that if you’re expecting a well-built and particularly good-looking keyboard, this isn’t it. It’s plasticky, but works at this reduced price point.

Update: After this review, Smartron informed us of a firmware update they had, on their forums, to fix the touchpad. Installing the update did indeed make the touchpad better, but it's not particularly fixed. It's more usable now, but it still registers gesture when they're no intended.

The Smartron t.book runs on a Intel Core M-5Y10C processor, which allows it to have a fanless design. Core M processors do compromise on performance a little bit, but on the t.book, it’s well worth the price. In fact, here again, the Asus UX305 is its closest laptop counterpart, and costs Rs. 10,000 more.

I wouldn’t call this zippy like the Surface, but it works. The t.book automatically turns off the screen when you pull the lid down on the keyboard. The display lights up automatically too, when you pull it back up again, but it’s a few seconds slower than the Surface. At Rs. 39,999, I’m fine with it. This isn’t a high-end Ultrabook-level performance, but it isn’t a weak device either, and is definitely good value for money. Considering that the Asus UX305 was part of our Zero1 Award line-up this time, the t.book begs for attention. There’s slight heating towards the middle-left side on the back, but not enough to be worried about.

From a performance point of view, I’m more than convinced with this device, and its pricing makes it all the more attractive. Personally, if the keyboard and touchpad were better, I’d be buying this device right now.

The front firing speakers on the Smartron t.book lack loudness, and are useful only when you're in completely silent locations, like in the dead of the night. In general, you'd need a speaker or headphones with the Smartron t.book. 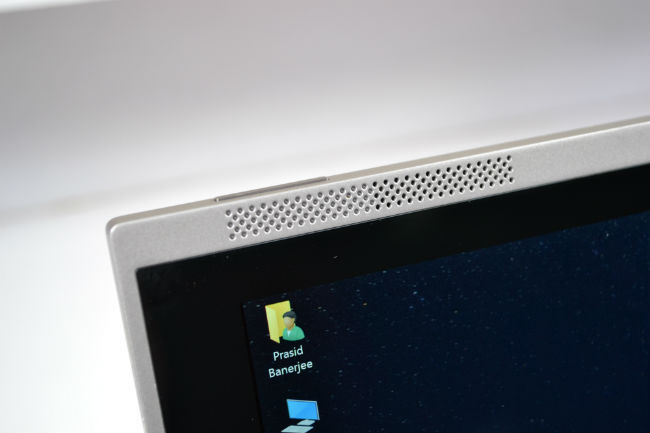 Battery: Kind of a letdown..

While Core M compromises on performance, it also increases battery life. Surprisingly, that’s not true for the t.book. On regular usage, while watching movies and videos, the battery life was enough to stream one two-hour movie, at HD quality. That’s the same as the Surface Pro 4.

Using this for typing and browsing, with the screen at 75% brightness, the best that I could get was 4.5 hours, which is a bummer. The Surface Pro 4’s Intel Core i5-powered variant does pretty much the same.

The Smartron t.book charges using a USB Type-C charger. It goes from nearly zero to full charge in less than an hour.

To conclude, Smartron may actually end up winning this war. Of course, the company has some brand building to do first, and it’s on the right track with Sachin Tendulkar as an investor and brand ambassador. It has a good product to sell, and given the t.book’s prowess, it raises my hopes for the upcoming Smartron t.phone as well.

Could the price have been lower? Perhaps, but I’m only saying that because it’s a new company with no established brand value whatsoever. If this were a product from a known brand, we’d all be loving it. A few tweaks to the keyboard, and perhaps a software update to fix the touchpad, the Smartron t.book will be the perfect product for those looking at laptop replacements.