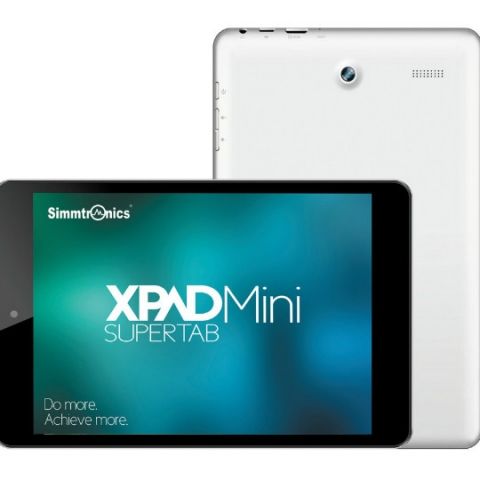 For a tablet priced at Rs. 9,999 the Simmtronics Xpad Mini is quite decent. It is plagued with lag and getting the microSD card in its slot is a pain, but apart from that, the device performs well. It is a treat to play games, videos and the tablet is good for multimedia. If you are on a really tight budget, you can consider this tablet along with the Zync Quad 8.

It is said, to be the best, first copy the best. This has been the trend with quite a few budget tablets and has worked quite well in their favour. Today we have with us the Simmtronics Xpad Mini. The tablet has a 7.85-inch display and a form factor very reminiscent of the iPad mini and runs on the Android 4.2.2. For a street price of Rs. 9,999, is the tablet worth a glance?

At a glance
Starting with the specifications, the Xpad Mini has a 7.85-inch display with a resolution of 1024x768 pixels and is powered by a quad-core 1GHz CPU coupled with 1GB of RAM. The device has 8GB built-in storage expandable up to 32GB via a microSD card. The rear of the tablet has a 5MP camera and the front has a 2MP camera for video chatting. A 4000mAh battery powers the entire package.

Here is a quick look to see where the Xpad Mini stands against the competition, which includes the Zync Quad 8, the Lenovo IdeaTab A1000, Nexus 7 first gen and the EAFT Destiny D90T, in terms of specifications.
For the price you pay the specifications of the tablet seem worthwhile, but as we all know, the specs only tell a small part of the story.

Design
The first thing that you will notice when you see the Simmtronics Xpad Mini is that it looks a lot like the iPad mini. The tablet has a 7.85-inch display and the rear of the tablet has a gunmetal finish. The tablet supports HDMI out and the tablet is surprisingly comfortable to hold and use.

The right side of the Xpad has the power button and volume rocker while the camera (without a flash) and the speaker are set at the back. The microUSB port, HDMI out along with the headphones jack rest on the top.

The overall build of the device is good and the finish doesn’t make it feel like a budget device. We have seen quite a few plasticky tablets in the market and it is nice to see a tablet with a good finish and sturdy build.

UI and Interface
The Simmtronics Xpad Mini has a stock Android interface with a few UI changes thrown into the mix. You have all standard Jelly Bean features from lock screen apps to Project Butter, drop down notifications and controls and more. Along with the back, home and multitasking options, you also have the volume controls and a button to take screenshots of the display.

The tablet also comes with a 4K video player app. We have seen this app on other devices such as the Zync Quad 8. Unfortunately there isn’t enough 4K content available to test this feature of the tablet. The tablet doesn’t come preloaded with any bloatware and that is good. Overall, the UI is simple, just the way we like it.

Performance
Since the tablet is priced at Rs. 9,999, lets take a look and see how it compares to other devices in its price range.

From the above benchmarks it is clear that the first generation Nexus 7 is a great performer as far as the benchmarks are concerned. It is only in the 3DMark tests that the Simmtronics Xpad Mini and the Zync Quad 8 outperform the Nexus and that is a good thing. But do these benchmark scores translate into real world performance?

Starting with the response of the touchscreen, the Xpad Mini isn’t the best there is in the market. It feels rough and there is a distinct lag when navigating the device. If you are multitasking on the tablet, you can expect to see a lot of stutter, jitter and lag.

Conversely, the tablet delivers when you want watch videos on it. The display is vibrant, has good viewing angles and the reproduction of colours is reasonably accurate too. Reading e-books, browsing the Web, etc. are without problems with the only hinderance being the lag that the tablet is plagued with. It was a task getting the microSD card into the tablet as well.

The keyboard on the Xpad Mini is stock Android and may feel cramped in the portrait mode. It feels OK to type on in landscape mode.

The 7.85-inch display has a resolution of 1024x768 pixels giving it 163ppi pixel density. The display has good viewing angles and as a stand alone device the display works but the difference in quality is evident when you place the tablet next to a 7-inch tablet with a 720p resolution.

Speaking of games, all of them worked on the tablet. Graphically heavy games were met with some lag but considering that this is a sub-Rs. 10,000 tablet and it managed to run Real Racing 3, well, now that’s impressive.

In terms of battery life, the Simmtronics Xpad Mini lasted for about 6 hours in our continuous video playback test. In the test, we ran a 720p MP4 movie on loop with the brightness and volume set at maximum. The Wi-Fi of the tablet was on as well. This means that under regular conditions, the tablet should last you a day on a single charge.

Bottom Line
For a tablet priced at Rs. 9,999 the Simmtronics Xpad Mini is quite decent. It is plagued with lag and getting the microSD card in its slot is a pain, but apart from that, the device performs well. It is a treat to play games, videos and the tablet is good for multimedia. If you are on a really tight budget, you can consider this tablet along with the Zync Quad 8.