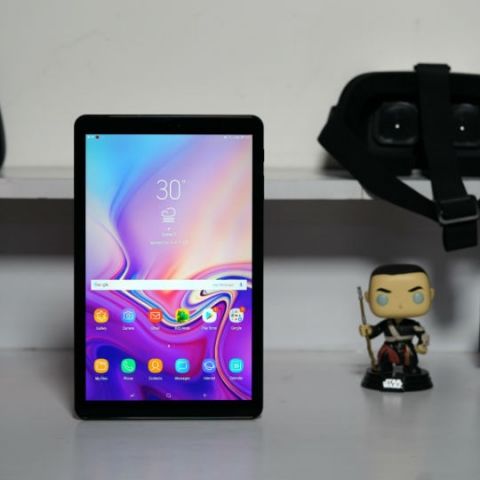 As a content consumption device, the tablet works well. It has a decent display with a good resolution, but the viewing angles suffer. The audio is legible, but I wish the speakers packed some bass and represented the background scores of movies better. When it comes to performance and battery life, the device gets the job done well. You can play all the games from the play store, run movie streaming services, and multitask with ease. For the price, it will satisfy those looking for a device that can be great for content consumption and making the occasional phone call.

The tablet market has changed a lot in the past year thanks to 2-in-1 devices like the Surface Pro and other windows-based convertibles. While they do offer the laptop level computing and productivity capabilities they fall short when it comes to tablet like content consumption. Devices like the iPad and Android tablets are still better options if you are looking for a content consumption device with a little bit of productivity thrown into the mix. However, in India, the Rs 25,000 to Rs 35,000 is dominated by older generation iPads, offerings from Samsung and the occasional tablet that pops up from other brands like Lenovo. Today we have with us The Samsung Galaxy Tab A. The device has a 10.5-inch display, runs on Android 8, boasts of USB-C connectivity along with 4 speakers for your content consumption needs. Is this the ideal mid ranged tablet for you?

In the box you get the tablet, a USB-C cable and the 9V fast charger. Its sad that you don’t get a pair of earphones in the box as the device does support calling and doesn’t house an earpiece. You will have to resort to a pair of earphones or a Bluetooth headset if you decide to use this as a behemoth phone. On second thought it is nice that the device doesn’t an earpiece as it would be strange to see people holding a 10.5-inch device to their ear to make a call. 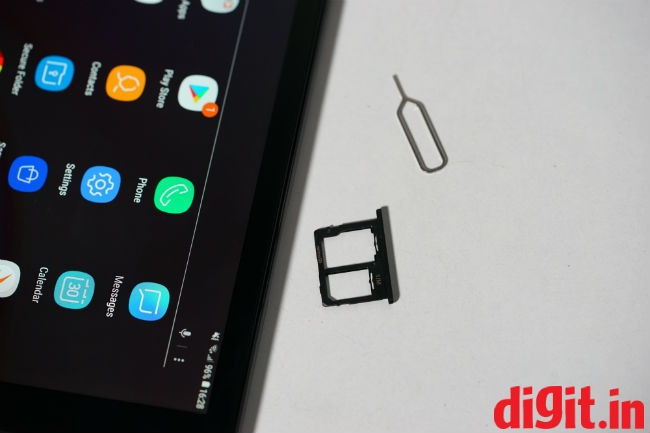 Key Specifications at a glance

Well-built is the first thing that comes to mind when you hold the Samsung Galaxy Tab A. At the back the tablet has a rubberized finish which gives the device a good grip when held for long periods of time. It is also nice to have a rubberized finish on a tablet when most of them are either plastic or metal. The 10.5-inch form factor is a tried-and-tested one (by the iPad for the past year), so as far as ergonomics are concerned, you will feel right at home. On the front you have the 10.5-inch display and the side bezels (when held in portrait mode) are quite thin. When held in landscape, the bezels are thick enough to act as a grip without you accidently touching the display. 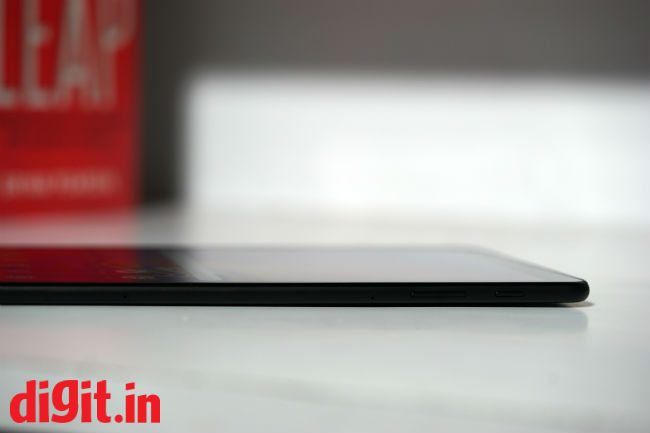 When playing games or watching videos, the device is comfortable to hold. It doesn’t come with a cover or the keyboard case in the box which is a bummer since the bottom of the device (when held in landscape mode) does have the Samsung connector. I wish the keyboard accessory was part of the package. If not the keyboard, at least a cover that doubles up as a stand, something like the iPad smart cover.

When it comes to port placement, you have the USB-C port at the bottom and the 3.5mm jack at the top when held in portrait mode. You also have the rear camera placed in the upper third of the back similar to what we saw on the Galaxy S8. The front camera rests in the centre of the top bezel.

Overall, the build of the Samsung Galaxy Tab A is good. The rubberized back adds grip to it, the device is slim and without investing in a case to prop it up at an angle, typing in landscape mode is tough. The device is slim, the size is good for playing games or watching videos, and I didn’t face any issues watching videos on the device while keeping it on my lap. 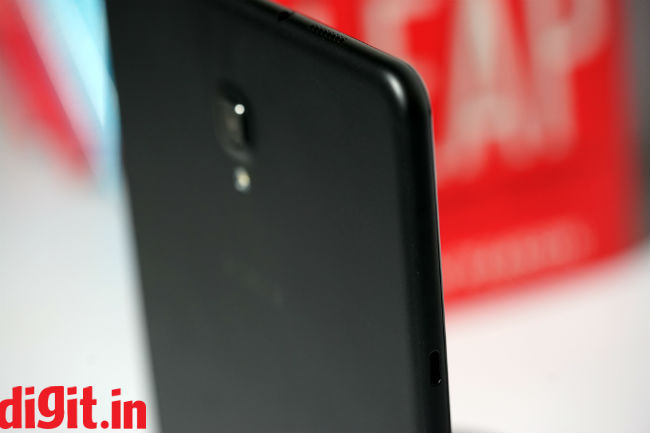 The 10.5-inch display has a 16:10 aspect ratio which means that when you watch movies, you will see black bars at the top and bottom, but that’s ok as the bars aren’t thick enough to hamper the viewing experience. As we’ve mentioned, the tablet has a 10.5-inch display, with a 1920x1200 pixel resolution. The only downside is that the display is a TFT panel which is a big disappointment. This means that the viewing angles aren’t great. From a company that is king of Super AMOLED displays, it is disappointing to see a TFT display on this tablet. If nothing else, we would have liked to see atleast an IPS panel on it. 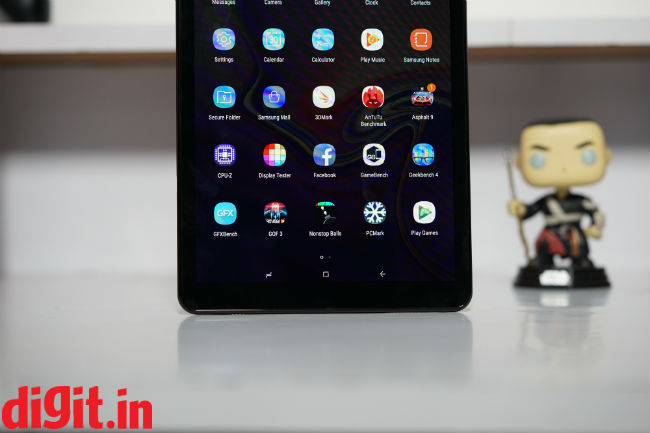 Under direct sunlight, the display performs well. You can read emails, kindle books, navigate the UI without any trouble. You can even watch shows like the Big Bang Theory which have bright vibrant environments, however any videos with dark sequences may suffer. Night sequences in videos will be slightly difficult to view under direct sunlight.

Coming to the audio, just like the Samsung Galaxy Tab S3 the Galaxy Tab A has four speakers – two on each side. The speakers are clear and work well. We saw a bunch of shows from Prime videos, Netflix and some YouTube videos and they work well. The speakers are audible even if there is a little ambient noise around you. They aren’t as loud as the speakers on the iPad Pro for example, but they get the job done nonetheless. We do wish the maximum volume was a little louder though. The audio lacks bass as well. Also, there are times when music will sound tinny, so this isn’t the device to enjoy your favourite music on. You may want to do that with headphones.

Overall, the Galaxy Tab A has a good display albeit the viewing angles and the audio is good to watch videos and play games, but for an immersive experience, use headphones.

When it comes to everyday performance, like checking mail, browsing the Internet, watching videos, playing games etc. the tablet performed well. The only place where it stutters is with heavy multitasking especially if you are one that will maximize the split screen capabilities of the device. You can watch a YouTube video while checking your mail or check your mail and SMS in split screen and if you do this a lot, you will see some stuttering. Switching between heavy games too will result in stutter but if you use the device without running multiple heavy apps, it should work fine. The Snapdragon 450 is a capable processor, but there are times when 3GB RAM falls short. For everyday use, the tablet works smooth enough.

Moving to the typing experience, the touchscreen is very responsive to the touch. Typing short messages can be achieved in portrait mode but to really type you need to be in landscape. Even though every letter I hit was recognised, the margin of error was a little high when compared to the iPad. This is probably because each letter has a little more real estate on the iPad’s touchscreen when compared to the Galaxy Tab A. Typing on this touchscreen can take some getting used to. 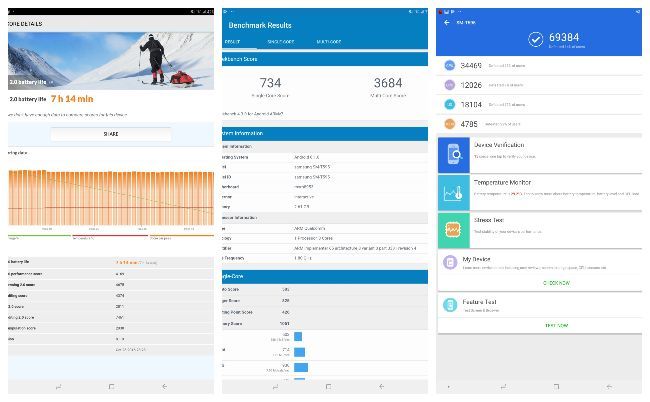 For the camera, it won’t replace your smartphone to take pictures. We used it mostly to make video calls, and it gets the job done well. Images on both the sides were clear and switching better the front and rear camera was a breeze. The images from the camera were blurry and don’t brings with it the bells and whistles found on Samsung’s flagship smartphones.

The tablet also boasts of Face Unlock and when it comes to performance, it is a hit or miss. Sometimes it works well, other times I had to enter the pin because it refused to recognize my face. The lighting of course plays an important role here. In well lit situations the face unlock worked well. Don’t expect it to unlock in the dead of night though.

When it comes to gaming, the tablet can play any game you throw at it from the Play Store. We mostly played Asphalt 9, Words with friends, Angry Birds, and they ran without a hitch. So, if you are looking to game on the device, you are good to go. 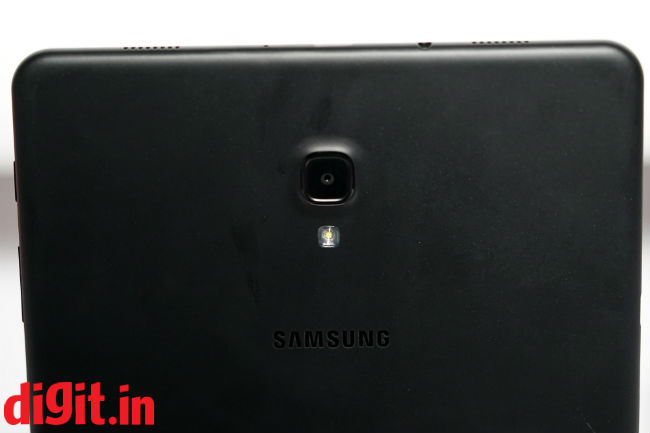 The Samsung Galaxy Tab A has a 7300mAh battery.  As far as battery life is concerned, you can get about 8 hours plus of local video playback. Battery life will vary depending on where you're streaming from. Heavy gaming can drain the battery life faster. In the PC mark battery test, the tablet lasted for 7 hours and 14 minutes. Control the brightness and you may be able to squeeze out a couple of extra hours. 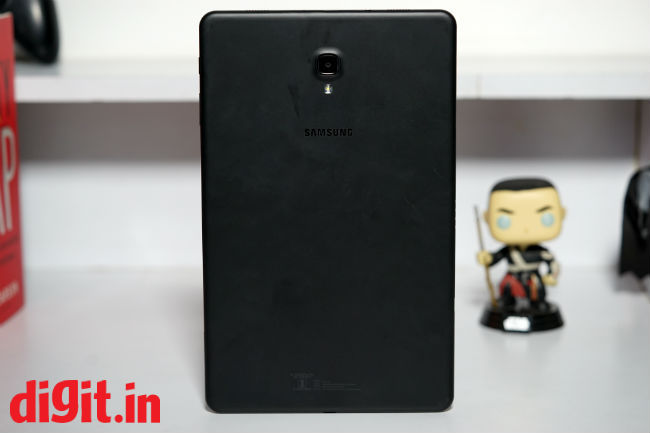 As a content consumption device, the tablet works well. It has a decent display with a good resolution, but the viewing angles suffer. The audio is legible, but I wish the speakers packed some bass and represented the background scores of movies better. When it comes to performance and battery life, the device gets the job done well. You can play all the games from the Play Store, run movie streaming services, and multitask with ease. For the price, it will satisfy those looking for a device that can be great for content consumption and making the occasional phone call along with some productivity. On the specs front, it is an update to the Galaxy Tab S2. Its closest competitor is the 9.7-inch iPad 32GB Wi-Fi only priced at Rs 28,000. The iPad has a higher resolution display and a better processor.