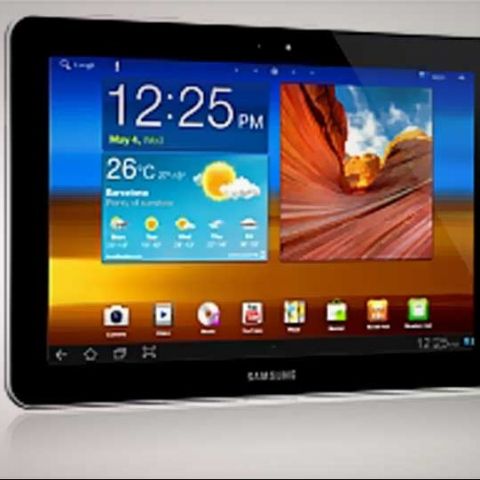 The Galaxy Tab has been the most vocal opponent of the Apple iPad, and the most shouty amongst all Android tablets! And all that noise does translate into something positive - extremely slim form factor, good build quality, brilliant display and a battery life. That actually delivers on expectations. The Galaxy Tab 750 is the best performing Android tablet we have seen till date. At Rs. 36,200, it is really testing your love for Android. If you want an Android tablet, this is the one to buy. If you want just a tablet, the Apple iPad 2 is still the one to buy.

Despite their best efforts, the likes of the Motorola Xoom, Acer Iconia and the Asus Transformer haven’t been able to dethrone the Apple iPad. But the challenge seems to have finally arrived, at least as far as putting up a good fight is concerned - the Samsung Galaxy Tab 750. Just to clear out the confusion, the Tab 730 has a 7-inch display, while the Tab 750 has a 10-inch display.

Significantly, the Tab 750 outdoes the iPad 2 in two significant aspects – the weight and the thickness. Apple iPad 2 weighs 607 grams while the Tab 750 weighs only 565 grams. While the purists will point fingers at the plastic finish that Samsung has applied on the 750, but it has done the job. The iPad 2 has an 8.8mm thickness while the Tab 750 has a 8.6mm thickness – not much but the figures speak for themselves!

In terms of overall build, there is a lot of difference in the materials used. And the iPad fanboys will criticise the Tab’s plastic body, but what that has done for Samsung is that it has given them an advantage both in terms of weight as well as slimness – without sacrificing on build quality.

[RELATED_ARTICLE] We always expect brilliant displays from Samsung devices, based on the past trend. And the Tab 750’s 10.1-inch display is much better than all other comparable Android tablets. While the resolution of 1280 x 800 pixels is the same as the rivals, the display is just a lot brighter and vivid. The iPad 2’s display is still a bit crisper though, despite the 750’s higher resolution. Brightness wise, the Tab’s display does well at 50% setting. Any more, it is just too bright for normal usage scenarios. Watching videos on this one is a lot of fun. The Galaxy Tab 750 does not have a memory card slot, has a proprietary dock connector, 3.15MP camera at the back and a 2MP video call camera and 16GB built-in storage.

Comes preloaded with Android 3.1 and the UI is exactly as we have seen on the other Android tablets recently – thanks to the NO CUSTOMIZATION rule. We like that rule, since it doesn’t let OS performance get sacrificed. However, it is creating a problem for the tablet makers, since their UI card cannot be played to distinguish from the rivals.

Performance
An ARM Cortex A9 dual core 1GHz processor, 1GB of RAM and the Tegra 2 chipset power the Tab 750. Performance wise, Android just felt slicker on this than the Xoom or the Iconia A501. However, Android as an OS just lets down the tablets, and the Tab 750 faces the brunt too. The sudden jerkiness and stutters are just disappointing. The rivals it is taking on, the iOS namely, does not have any of these annoying characteristics!

The TouchWiz UX UI is quite nicely hanging around in an understated fashion. While it does retain the characteristics we saw on the Galaxy SII smartphone, it does it in a more silent fashion - mostly because, Google now frowns upon UI skins on top of Android 3.0 and beyond.

Battery life is comparable to the iPad 2 – about 12 hours. That is a huge relief, because the tablets we have reviewed recently have flattered to deceive more often than not.