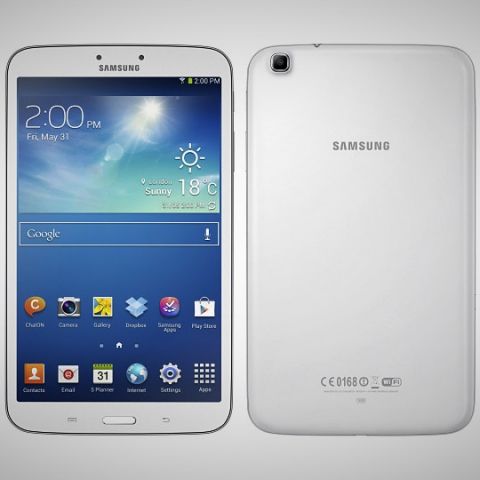 If you are in the market to pick up an 8-inch tablet, you have the iPad mini as a great option as well. But the mini doesn’t have calling capabilities. You have other budget devices such as the Zync Quad 8 too available in the 8-inch form factor but the overall performance of the Galaxy Tab 3 311 is better. If calling capability is a must, then the Galaxy Tab is the device for you. If not, you may want to consider the iPad mini since the Apple app ecosystem is great for tablets. If you want the best performing Android tablet and don’t mind a 7-inch form factor and no calling capability, you can take a look at the second-generation Nexus 7 tablet.

The Tab 3 311 brings with it an 8-inch display and a slew of features that we have seen on other Samsung devices such as the Note 510, S4, and more. The device however doesn’t have the S Pen stylus, which is found on the Note series devices from Samsung. Is 8-inch a comfortable form factor for calling and tablet use?

At a glance
Starting off with the specifications, the Galaxy Tab 3 311 has an 8-inch display with a 1280x800 pixel resolution. Under the hood, it has a dual-core 1.5GHz processor along with 1.5GB of RAM. The rear of the tablet has a 5MP shooter and the front has a 1.3MP camera. It has 16GB built-in storage expandable up to 64GB via a microSD card. A 4,450mAh battery powers the entire package.

Here is a quick specifications comparison between the Galaxy Tab 3 311 and iPad mini, iPad 2, Huawei MediaPad 10 Link, and the Samsung Galaxy Tab 3 211.

Design
Staying true to the Samsung tradition, the Galaxy Tab 3 311 has the same look and feel as other Samsung tablets such as the Tab 3 211, Note 510 and the Tab 2. The tablet is quite thin measuring at 7.4mm but not the slimmest there is (a claim that is currently held by the Sony Xperia Tablet Z). On the face of the device you have the standard Samsung design – front facing camera and earpiece above the display and the home physical button along with the capacitive ‘menu’ and ‘back’ buttons on either side.

The ports and connectivity options are standard too. You have the microSD card slot and the SIM card slot on the left of the device secured under flaps. The right houses the power button along with the volume rocker. The right side of the device also has an IR blaster, so the device can be used as a universal remote. The top has the headphones jack and the bottom has the microUSB port for charging and data transfer. On either side of the microUSB port you have the speakers. The rear of the tablet houses the camera and there is no flash. The back of the tablet is traditional Samsung plastic and you don’t have access to the battery.

The biggest problem with the design of the Tab 3 311 is that the device is uncomfortable to hold in one hand and use as a phone. It’s quite wide which makes the grip uncomfortable. For prolonged use as a phone, it isn’t recommended. We say, use headphones or a Bluetooth headset.

Apart from the 8-inch display, Samsung is going with the “if it ain't broke don’t fix it” philosophy with the design of the Tab 3 and if you are happy with a plasticky build then the design of the tablet may appeal to you. However, we have seen devices such as the Asus FonePad, Nexus 7 second gen and the Zync Quad 8 boast of impressive design and build.

UI and Interface
Straight out of the box, the tablet runs on Android 4.2.2 Jelly Bean with Samsung’s TouchWiz UI interface overlaying it, the same that is found on all Samsung tablets and smartphones.

Starting with the lock screen, you can swipe anywhere on the display to unlock the tablet. You can also access lock screen apps from the settings menu in case you want access to apps directly from the lock screen. Once unlocked, you have the standard five customizable home screens that you can load with apps and widgets. You also have the standard apps and widget-listing page. The drop down notification gives you access to shortcuts such as screen rotation, Bluetooth, data, multi-window, brightness and more.

Long pressing the back button pulls out an app drawer. This app drawer lists all the apps that you can use in the multi-window mode on the tablet. Yes, the tablet has the ability to run two apps simultaneously on the display. You can have the browser running in the top half while watching a video below. You could be checking your mail and checking out Google Maps at the same time. It’s quite a handy feature and one that you will be using quite a bit especially if you appreciate multitasking on the go.

Last but not the least, the tablet also offers pop out play. You can watch your videos in a small window on the display of the tablet while taking care of other work.

Samsung has also introduced My Services with the Tab 3. My Services offers users services such as My Education, My Offers, My Games, My Music, My Movies and My Education.

My Music and My Movies: You have access to a large library of movies and music to choose from. You can access this content with “coins”- each movie or song costs a certain number of coins. To put this in real world value, one coin is equal to one rupee. You can always download third party apps such as BigFlix and more to enjoy movies on the go.

My Offers: My Offers gives users access to deals and schemes available at stores listed near them. While using the app, we saw that there were a few deals available on electronic items available at a nearby Reliance Digital. The app features deals from 350 brands and 25000 merchants in India.

The tablet also comes with an app called the smart remote. It houses an IR blaster near the volume rocker and you can essentially set up the tablet to work as a universal remote. This is pretty handy if you want to control your TV, home theatre and more with a single device.

Overall, the Galaxy Tab 3 311 is a step above the Galaxy Tab 3 211. The size of the display has increased, and you get a slew of features such as the IR blaster and the multi-window feature, which isn’t there on the 7-inch version of the tablet.

Performance
Since this is a premium device, let’s see how it competes with other devices in its price bracket. Such as the second gen Nexus 7 and the Huawei MediaPad 10 Link.

In terms of benchmark performance, the Samsung Galaxy Tab 3 311 is good. It has a dual-core processor and 1.5GB of RAM and the scores are quite close to the Huawei MediaPad 10 Link which is a tablet running on a quad-core CPU. The second gen Nexus 7 however is the clear winner here.

Moving on to the day-to-day performance of the Tab 3, the tablet has a very responsive and smooth touchscreen. Everyday activities such as browsing the Internet, playing games, and generally anything to do with navigating the interface using the touchscreen is a good experience.

The keyboard isn’t stock Android and is the same one that we have seen on the Galaxy Tab 3 211. It is quite comfortable to type on.

The 8-inch display has a 1280x800 pixel resolution giving it 189ppi pixel density. The display has good viewing angles and as a stand alone device the display looks good. There are tablets available with higher pixel density, but consuming content on the Tab 3 311 isn’t a bad experience by any standards.

Speaking of games, all of them worked on the tablet and there isn’t much to complain about here. Graphically heavy games stuttered a bit if there was heavy multitasking in the background.

The performance of the multi-window applications too was nice. It was a treat to watch YouTube videos and browse the Internet at the same time or check Google Maps and chat on Hangout at the same time. The only time when this stuttered a bit was due to heavy multitasking but nothing that hampers the experience.

Natively the Samsung Galaxy Tab 3 recognised all the video formats we threw at it – AVI, MP4 and MKV. It is fun watching videos on the device and the on-board speakers are quite loud and crisp.

In terms of its battery life, the Samsung Galaxy Tab 3 311 lasted for 6.5 hours in our continuous video playback test. In the test, we ran a 720p MP4 movie on loop with the brightness and volume set at maximum. The Wi-Fi of the tablet was on as well.

Bottom Line
If you are in the market to pick up an 8-inch tablet, you have the iPad mini as a great option as well. But the mini doesn’t have calling capabilities. You have other budget devices such as the Zync Quad 8 too available in the 8-inch form factor but the overall performance of the Galaxy Tab 3 311 is better. If calling capability is a must, then the Galaxy Tab is the device for you. If not, you may want to consider the iPad mini since the Apple app ecosystem is great for tablets. If you want the best performing Android tablet and don’t mind a 7-inch form factor and no calling capability, you can take a look at the second-generation Nexus 7 tablet.