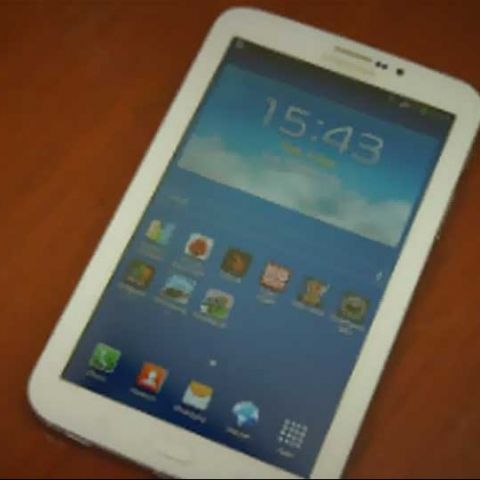 The upgrade in specifications on paper from the Tab 2 to the Tab 3 isnï¿½t spectacular. For the price you pay, you get a tablet that gets the job done, but feels lacking if you are a heavy user and want to play graphically heavy games and want a lot of multitasking. For heavy-duty use, you have devices such as the Nexus 7 (even better if you can get your hands on the second gen one from the US) as the tablet has a better display, better power under the hood and a stock Android interface. If you are in the market to pick up a sub-Rs. 20,000 tablet, you may want to consider options such as the Nexus 7, Asus Fonepad, Zync Quad 8 before making your purchase decision.

Samsung had a very successful product in the Galaxy Tab 2 P3100 last year. It had a 7-inch display, good power under the hood and also had the ability to make calls. It was surprising to see a large number of people carry the device with them and use it as their primary smartphone in spite of its large chassis, but at least some users had the sense to use it with a Bluetooth or wired headset. The Tab 2 was really good as it offered the best of both worlds- tablet and smartphone, to the consumer at a time when Android had taken over as the most popular OS in the world.

Fast-forward a year and we now have the Tab 3 in our hands. Is this the evolutionary next step for a successful tablet or will it crash and burn?

At a glance
Starting with the specifications, the Galaxy Tab 3 211 boasts of Wi-Fi and 3G connectivity. It has a 7-inch display with a 1024x600 pixel resolution and is powered by a dual-core 1.2GHz CPU coupled with 1GB of RAM. The device has 8GB built-in storage expandable up to 64GB via a microSD card. The rear of the tablet has a 3MP camera and the front has a 1.3MP camera for video chatting. The device is 9.9mm in thickness and weighs a mere 304 grams. A 4000mAh battery powers the entire package.

Here is a quick look to see where the Tab 3 stands against the competition, which includes the Asus Fonepad, the Galaxy Tab 2, Zync Quad 8 and the Nexus 7, in terms of specifications.

The Galaxy Tab 3 hasn’t broken any barriers with regards to specifications and we have tablets available in the market, such as the Asus Fonepad, that offer better specifications on paper.

Design
Staying true to the Samsung tradition, the Galaxy Tab 3 211 has the same look and feel as its predecessor, the Tab 2. The biggest difference is that it’s thinner, measuring 9.9mm in thickness. The tablet is relatively slim for its price point but it doesn’t hold the title for the slimmest tablet in the market (currently held by the Sony Xperia Tablet Z). On the face of the device you have the standard Samsung design – front facing camera and earpiece above the display and the home physical button along with the capacitive ‘menu’ and ‘back’ buttons on either side.

The ports and connectivity options are standard too. You have the microSD card slot and the SIM card slot on the left of the device secured under flaps. The right houses the power button along with the volume rocker and the top has the headphones jack. The bottom has the microUSB port for charging and data transfer. On either side of the microUSB port you have the speakers. The rear of the tablet houses the camera and there is no flash. The back of the tablet is traditional Samsung plastic and you don’t have access to the battery.

Samsung is going with the “if it ain't broke don’t fix it” philosophy with the design of the Tab 3 and if you are happy with a plasticky build then the design of the tablet may appeal to you. However, we have seen devices such as the Asus FonePad and the Zync Quad 8 boast of impressive design and build.

UI and Interface
Staying true to tradition you have the standard TouchWiz UI overlaying the Android OS on the Galaxy Tab 3. The tablet comes preloaded with a bunch of apps although the suite isn’t as large as what we have come to see from other Samsung devices. You do have access to the Samsung App store in addition to the Google Play store on the tablet though.

From the lock screen you have shortcut access to five apps – phone, messaging, browser, camera and Google Now. The tablet compromises on features such as Multi-Window apps, which are missed and Smart Stay which we aren’t. You can however watch videos in a smaller window while running other apps on the tablet.

We have seen the TouchWiz UI evolve quite a bit on the Note II, Note 800, Samsung Galaxy S4 and more and looking at a basic version of the UI on the Tab 3 feels like a step back.

Samsung has also introduced My Services with the Tab 3. My Services offers users services such as My Education, My Offers, My Games, My Music, My Movies and My Education.

My Music and My Movies: You have access to a large library of movies and music to choose from. You can access this content with “coins”- each movie or song costs a certain number of coins. To put this in real world value, one coin is equal to one rupee. You can always download third party apps such as BigFlix and more to enjoy movies on the go.

My Offers: My Offers gives users access to deals and schemes available at stores listed near you. While using the app, we saw that there were a few deals available on electronic items available at a nearby Reliance Digital. The app features deals from 350 brands and 25000 merchants in India.

Performance:
Since the tablet is priced at Rs. 17,745, lets take a look and see how it compares to other devices in the same price range such as the first gen Nexus 7 and the Asus FonePad.

The scores of the Galaxy Tab 3 are slightly better than the Asus FonePad and lower than the first generation Nexus 7 (that has a quad-core processor).

Moving on to the day-to-day performance of the Tab 3,  we found that the tablet has a very responsive touchscreen. The interface is also smooth and responsive. Browsing the Internet, playing games, and generally anything to do with navigating the interface using the touchscreen is a good experience.

The keyboard on the device feels slightly cramped in landscape mode at first. Then you realize that there is spacing between the alphabets to make typing a lot more seamless and you will get used to the keyboard in no time.

The 7-inch display has a 1024x600 pixel resolution giving it 170ppi pixel density. The display has good viewing angles and as a stand alone device the display looks ok. It’s worth pointing out here though that there are 7-inch tablets available in the market that show off a 720p display. Keep the Tab 3 near one of these tablets and you will be able to make out the difference in the quality of the display. Even though the 1024x600 pixel resolution gets the job done, we wish the resolution was higher.

Speaking of games, all of them worked on the tablet. Graphically heavy games were met with some lag and there were some levels in Angry Birds Star Wars as well that stuttered when the action got too intense on screen.

To put things into perspective, the calling capabilities of the Tab 3 are as good as the Tab 2 if not better and that is a good thing seeing that the Tab 2 had a good speaker and earpiece sound quality while making calls.

The 3MP rear-facing camera gets the job done when the lighting conditions are very good. In broad daylight we got some good looking images. But once the lights go out, the quality of the camera drops radically.

Natively the Samsung Galaxy Tab 3 recognised all the video formats we threw at it – AVI, MP4 and MKV. The device was a treat to watch videos on. If you want, you can use the power button to lock the interface of the tablet while watching videos. This means that you can’t access the video’s timeline, adjust the volume or exit the video until you have unlocked the device. This is interesting as it gives you the ability to enjoy the movie and not get disturbed when you accidently press the home or back button.

In terms of its battery life, the Samsung Galaxy Tab 3 7.0 lasted for 6.5 hours in our continuous video playback test. In the test, we ran a 720p MP4 movie on loop with the brightness and volume set at maximum. The Wi-Fi of the tablet was on as well. This means that under regular conditions, the tablet should last you more than a day on a single charge.

Bottom Line
The upgrade in specifications on paper from the Tab 2 to the Tab 3 isn’t spectacular. For the price you pay, you get a tablet that gets the job done, but feels lacking if you are a heavy user and want to play graphically heavy games and want a lot of multitasking. For heavy-duty use, you have devices such as the Nexus 7 (even better if you can get your hands on the second gen one from the US) as the tablet has a better display, better power under the hood and a stock Android interface.

If you are in the market to pick up a sub-Rs. 20,000 tablet, you may want to consider options such as the Nexus 7, Asus Fonepad, Zync Quad 8 before making your purchase decision.