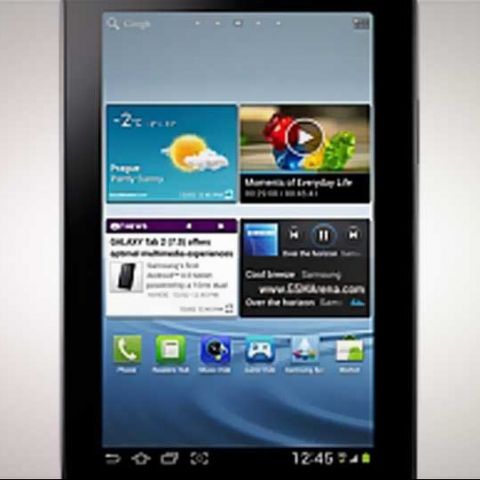 The Samsung Galaxy Tab 2 is a fantastic device. It hits the sweet spot between the budget tablets and the iPad. It has features and specifications that are value for money, and it is an better overall performer than the Sony Tablet S and the Motorola Xoom. The only disappointment comes with the display, which could have had a better resolution and the fact that the Google Play store isn't well populated with tablet specific apps. If you are in the market to spend Rs. 20,000 on a tablet, the Samsung Galaxy Tab 2 should definitely be on your list.

We have also begun to see some budget tablets hit the streets that boat of decent hardware under the hood and an attractive price point of around Rs. 10,000.

The Samsung Galaxy Tab 2 is priced at the Rs. 20,000 mark which means that it offers features specifications and a build that goes beyond the budget devices and is aimed at the audience that doesn't want to drop a lot of cash on the iPad.

But does the device make a place for itself in the tablet market or are you better off aspiring for an iPad?

One look at the device and it has the build of a typical 7-inch tablet. It feels way better than any budget tablet that we have seen but doesn't have the classy feel of the iPad. The rear of the Galaxy Tab 2 has a grey plastic matte finish which is nice. It gives the device an elegant finish while making it a resistive to dust and fingerprints. The front of the device has the 7-inch display, which is glossy, and a fingerprint magnet.

The Samsung Galaxy Tab 2 is really slim measuring in at 10.5mm thin and is relatively light at 344 grams. It fells really sturdy in ones hands. Considering its size, the device fells very comfortable in both landscape as well as portrait mode.

At the bottom of the tablet to the right and the left of the dock connector rest the two speakers.

The downside to the connectivity options is that Samsung has gone the Apple way with a proprietary dock connector. This isn’t a bad thing, but we have seen budget tablets from Zync and iBerry that offer HDMI-out straight out of the box.

From the moment you switch on the device, the Samsung Galaxy Tab 2 runs on Google Android 4.0 ICS skinned with Samsung’s TouchWiz UI. With TouchWiz, Samsung brings with it a bunch of preloaded apps such as PolarisOffice, Samsung Apps, eBuddy XMS, TuneIn Radio, Chat On and more. Samsung All share app comes preloaded on the device. The app enables uses to share multimedia content with the Galaxy Tab and a DLNA enabled TV.

At the bottom of the screen on the left, you have touch sensitive buttons representing back, home, task manager for easy killing of apps and freeing memory and a nifty button used to take screen shots.

Under the hood, the device is powered by a dual core 1GHz processor, has 1GB of RAM and comes with 3 variants of internal storage – 8GB/16GB/32GB. The review unit we received boasts of 16GB of internal storage. Other specifications include 802.11 b/g/n Wi-Fi, Bluetooth 3.0, GPS, gyroscope, accelerometer and digital compass. The screen on the Samsung Galaxy Tab 2 is 7-inches and has a resolution of 1024 x 600. This resolution seems a little disappointing as we have seen devices that boast of a resolution of 1280x 800.

Overall the device is quite well loaded with features. If you are used to the Android powered Samsung smartphones, you will fell tight at home here. If you are looking for a raw Android experience you will have to look elsewhere as every aspect of the interface than can be customized has been customized by Samsung with TouchWiz. If you want a raw Android experience, on a 7-inch device, you will have to take a look at the Google Nexus 7.

Meanwhile, check out the video review of the Samsung Galaxy Tab 2 below:

Starting with the display, it is quite bright, but the viewing angles aren’t the best but the get the job done well. It is very smooth and responsive living up to the reputation of being a premium device. The dual core processor adds to the smoothness of the device and multitasking is relatively good. But run too many apps in the background and even with 1GB of RAM, you will see the device lag a bit.

The keyboard on the device is one to look out for. It has the standard QWERTY layout with the greatest addition being that the numbers 1 to 9 and 0 rest in the first line of the keyboard. This is nice as you don't need to alternate the layout to access the number pad. The typing experience is quite good too. The keys are well laid out and comfortable to use in both portrait and landscape. Predictive text makes typing faster and easier.

A disappointing feature of the device is that it didn't play .mov files straight out of the box. MP4 files ran smoothly and the device played them without any hiccups but the lack of file format support was disappointing.

Speaking of disappointments, it is virtually impossible to transfer files from a Mac to the Samsung Galaxy Tab 2. We wish it were as easy as plug and play as it is on most Android tablets but it isn’t.
Users will have to download an app from http://www.android.com/filetransfer/ to transfer files and it is still unsuccessful. Ultimately, we had to resort to AirDroid to transfer files from our system to the Mac.

One of the best features of the Samsung Galaxy Tab 2 is that it can be used as a phone and you can also use the 3G connectivity via the SIM card. It has a SIM card slot. It does look very odd holding the 7-inch tablet to your ear but its nice that you have the option to use the device as a phone. Ergonomically though, unless you have a relatively large jacket pocket or a bag with you always, its difficult to carry the device. We wouldn't recommend you use it as your primary smartphone.

As we mentioned earlier, the device is skinned with Samsung’s TouchWiz. If you are a Samsung smartphone user you will feel right at home. If you are one who hates it, then you will have to install your custom launcher from the Google Play store.

One of the biggest disadvantages of Android tablets is that there are few tablet specific apps. The Facebook app looks similar to the one available on Android smartphones and a lot of screen real-estate look wasted.

Games on the other hand ran very well and look great on the device. It was fun playing the Angry Birds franchise, Nunjump and Paper Toss. The load times of the game were very swift.

The rear of the tablet houses has a 3.1MP camera without a flash and the front has a VGA camera for video chatting. The rear camera isn’t the best camera there is to take photos but it does a good job of clicking pictures when the ambient light is good.

In terms of raw performance, the Samsung Galaxy Tab 2 is a real performer. It scored a 2652 on Quadrant beating the Sony Tablet S (read our review) that scored a mere 1539 where as the Motorola Xoom scored 1404.

In the Antutu benchmark, it scored 5311 leaving the competing Sony Tablet S behind at 4901 and the Motorola Xoom scored 5260.

In the GLBenchmark, the device has proved that it is a great performer with its graphical capabilities. The device scored 3057, which is quite high when compared to the Sony Tablet S that scored 1878.

The inbuilt browser on the device isn’t the best. You do better to download chrome for Android and enjoy a smoother browsing experience.

The most important question, how long will the device last? Well for average use, i.e., social networking, email, playing games, browsing the internet, music and movies, the device lasted for a little over one and a half days.

Bottom Line
The Samsung Galaxy Tab 2 is a fantastic device. It hits the sweet spot between the budget tablets and the iPad. It has features and specifications that are a bang for the buck and it is an overall better performer than the Sony Tablet S and the Motorola Xoom. The only disappointment comes in the display that could have had a better resolution and the fact that the Google Play store isn’t well populated with tablet specific apps. If you are in the market to spend Rs. 20,000 on a tablet, the Samsung Galaxy Tab 2 should definitely be on your list.