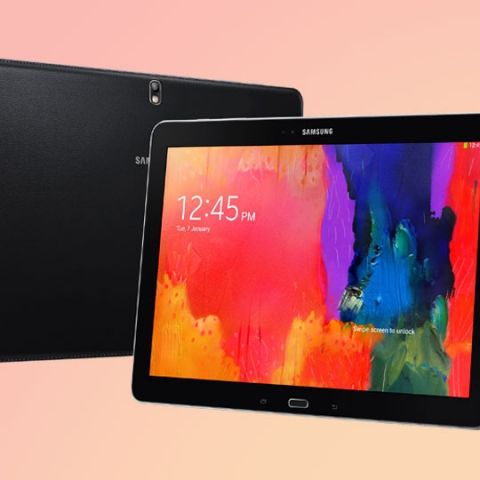 The Galaxy Note Pro 12.2 is labeled as a “business” tablet, and that gives it a completely different persona. This tablet may not completely replace your laptop for many tasks, but it does come quite close. The display is very good and comes in a typical Samsung style. There are the gamut of features including the complete S-Pen ecosystem of apps. A bunch of preloaded business centric apps give the tablet some extra productive capabilities than most tablets. However, the big screen size may be an issue for some users, and I am not really sure why the same could not have been replicated with the same screen size as the one on the fantastic Samsung Galaxy Note 10.1 tablet.

Samsung’s range of Android tablets just became a tad larger, with the addition of the biggest tablet of them all - the 12.2-inch Samsung Galaxy Note Pro. The “Pro” monicker comes because the tablet is targeted at the business users which is clarified by the fact that the tablet comes preloaded with a bunch of software that will go some way in assuring that. But for a tablet this size, it will equally appeal and alienate some.

Build & Design
Consistency seems to be the mantra that the design team at Samsung follows. Look at the Note Pro side by side with the Note 10.1 (2014 Edition); you won't be able to find much difference. Up front, there is the familiar home button flanked by two touch sensitive keys on either side. The home button also doubles up as the control for S-Voice. The curved edges and the plastic frame designed to look like metal is again something carried forward as is.

The leather-like finish at the back, with the faux stitching is definitely a massive step up over the shiny plastic that Samsung was often criticized for. This is the kind of finish that has its fans, and critics which boils down to personal choice. Personally, I like the looks of this leather-ish finish, which feels premium and doesn’t catch smudges.

Along the spines, there are multiple ports that have been spread out - microSD slot for storage space expansion, an IR blaster to use the Peel remote control app, and Micro-USB 3.0 for charging and file transfers.

At 1.7 pounds (0.7kg), the Samsung Galaxy Note Pro does not feel heavy at all, and that is something you will be fairly amazed by. Considering the display size, this tablet has kept its weight and thickness well in check, and Samsung deserves a pat on the back for that. 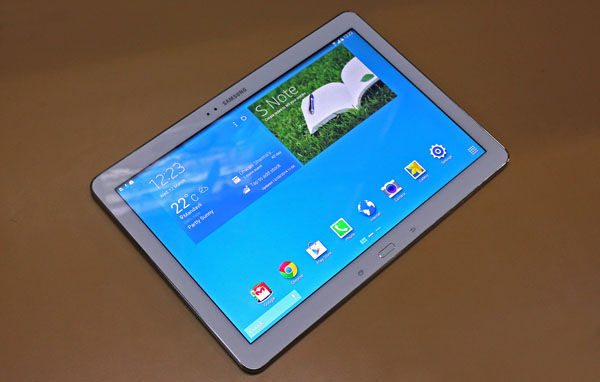 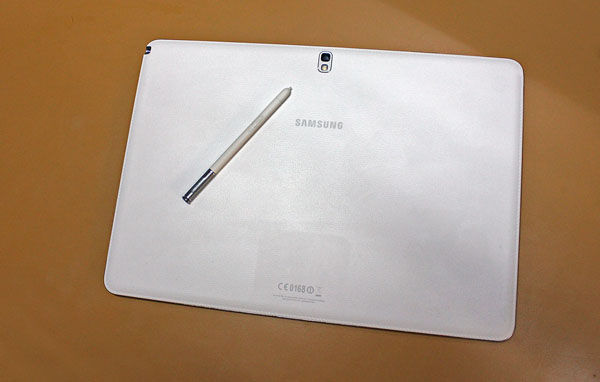 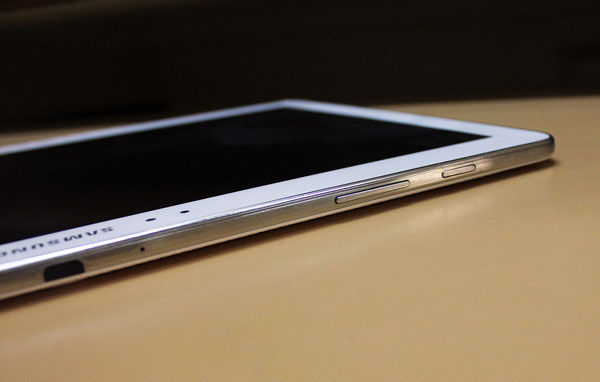 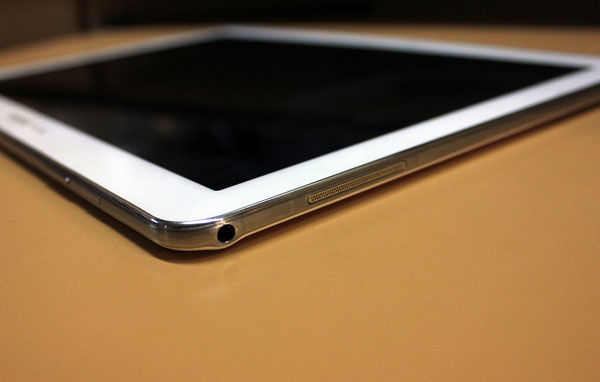 Performance
The Galaxy Note Pro is powered by the same Exynos 5420 processor clocking at 1.9GHz, as inside the Galaxy Note 10.1 2014 Edition and features an identical 3GB of RAM.

Before we get down to the performance aspects of the device in question, it is important to take a look at the ever evolving TouchWiz UI. With each iteration, Samsung has made subtle tweaks to the looks of the interface. While the TouchWiz UI doesn't work well at times, in the case of the Galaxy Note Pro, it most certainly does. Widgets look a lot better and don’t look like plastered boxes, and fill the screen a lot finer than earlier. The Magazine UX is perhaps the biggest evolution in terms of additional functionality and a refreshed look. By default, there are two such screens, apart from the standard widgets and icon home screen. One offers all Business centric apps - email, calendar and the Hancom office apps. The second offers lighter stuff - News, sports scores etc. You can pretty much change all this around and select between a bunch of widgets and social networks to show up information here. Unlike traditional widgets, these boxes of information fill up the screen end to end, and Samsung has incorporated multiple customization options, including layout and widget sizes. You need to have at least one Magazine UX page as a part of the TouchWiz UI. 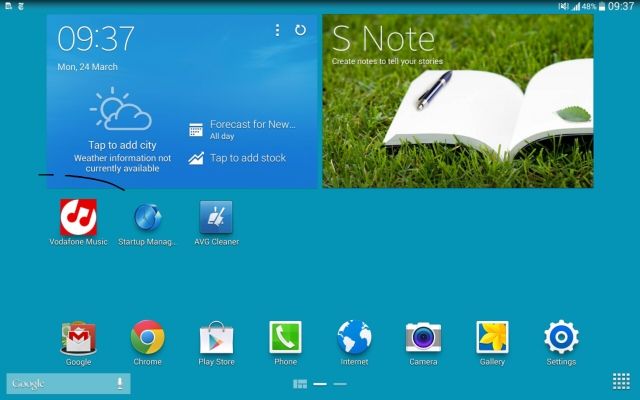 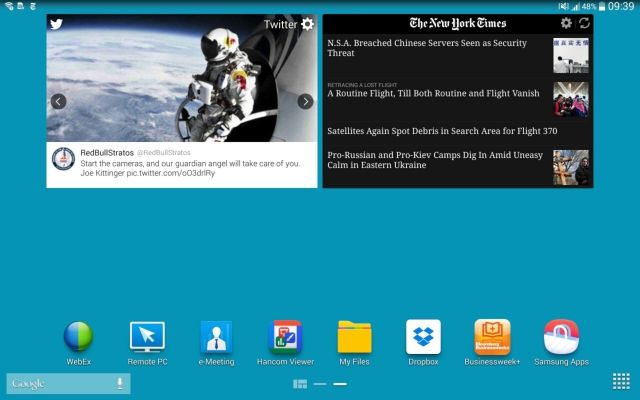 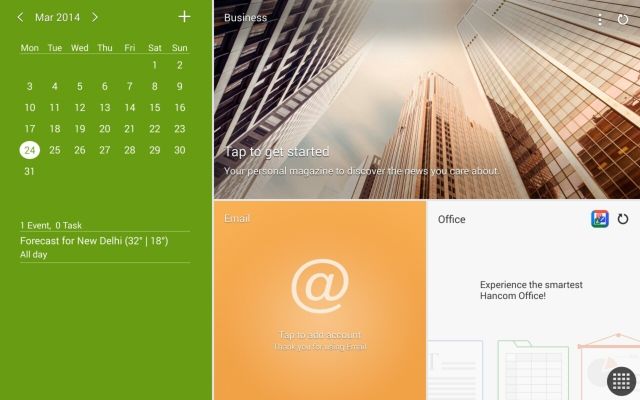 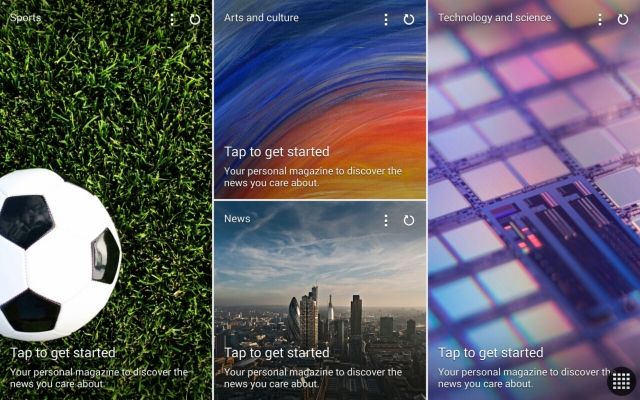 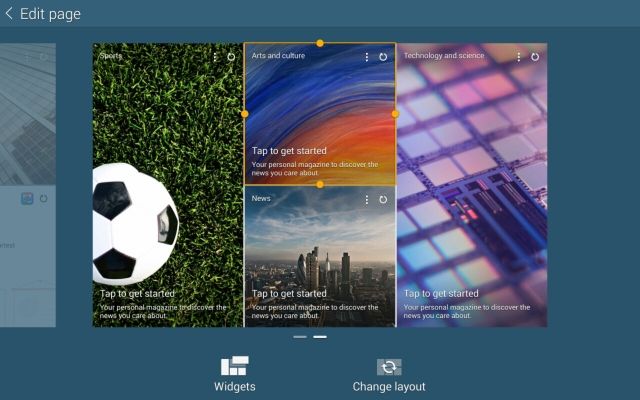 The Galaxy Note Pro’s 12.2-inch screen has the same 2,560x1,600-pixel resolution as the Galaxy Note 10.1 (2014 Edition). Despite the slightly bigger screen, the brilliance is retained as is. The display is bright, text is crisp and the ability to tweak colour richness among three presets makes a lot of difference when reading an ebook or watching a movie. For a screen size as big as 12.2-inches, this is aimed at the business user who might pair this with a Bluetooth keyboard and use this as a laptop replacement. Equally, this screen is brilliant for watching movies on. The only issue is the reflective nature reduces viewing angles considerably.

In terms of system performance, the Galaxy Note Pro 12.2 has the same hardware and the specifications that catapulted the Galaxy Note 10.1 (2014 Edition) to the top of the Android tablets scoresheet. Needless to say, you really only need to figure out if this tablet fits your usage scenario, because the performance will be absolutely fantastic. No slowdowns, no sluggishness and the UI has been streamlined along the way that it doesn’t get in your way - either in terms of performance or in utility. For gaming, this may be a tad too big to be moved around as you power-slide your way through a corner at the Laguna Seca Raceway in Real Racing 3. But, game load times are quick and the gaming performance is very good.

Battery life is a tad lesser than the 10.1-inch sibling. In the video battery drain test, with the same HD video used on both devices via VLC with screen brightness at 100% and volume at 50%, the Note 10.1's battery dropped to 86% in an hour. The Note Pro’s battery level was at 81% after the same duration. The bigger display was bound to have a slight negative impact on the battery, but we don’t think the impact is big enough to have an impact on your consideration.

To buy or not to buy?
The Galaxy Note Pro 12.2 is labeled as a “business” tablet, and that gives it a completely different persona. This tablet may not completely replace your laptop for many tasks, but it does come quite close. The display is very good and in typical Samsung style, there are the gamut of features including the complete S-Pen ecosystem of apps. A bunch of preloaded business-centric apps give this a little more productive capabilities than most tablets. However, the big screen size may be an issue for some users, and I am not really sure why the same could not have been replicated with the same screen size as the one on the fantastic Samsung Galaxy Note 10.1 tablet.