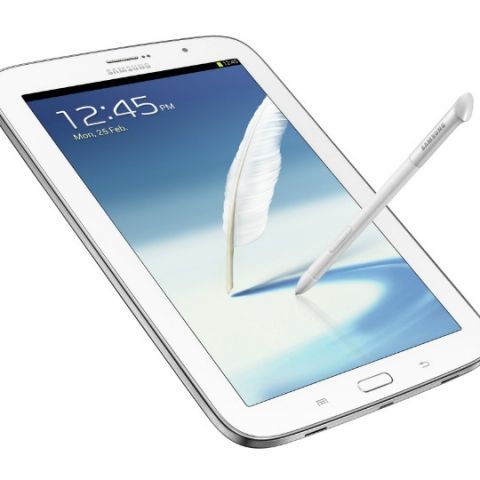 The Note 510 is a great performer with lacklustre build quality. The iPad mini is better built and has a larger apps ecosystem. The Galaxy Note 510 on the other hand has voice-calling, a better display, the S Pen functionality, expandable storage, multi-window capabilities and the Android OS with access to the Google Play store and Samsung app store. Both choices are good, and it comes down to price, and ecosystem preference for the user.

Samsung has an impressive smartphone library ranging from the absolute budget all the way up to their flagship, the Galaxy S4, priced around the Rs. 40,000 mark. Samsung has quite a few tablets available in the market as well. We have seen a large number of tablets that choose either the 7-inch form factor or the 10-inch form factor. There is the occasional tablet available that takes on the 8-inch display size. We have seen the iPad mini, Zync Quad 8 and more use this form factor.

Today, we have with us the Samsung Galaxy Note 510 priced at Rs. 29,990, a tablet that is positioned to take on the iPad mini in the sub-10-inch tablet war. Does it have the bang and whistles to impress us or are we better off aspiring to go the Apple way?

At a Glance
The tablet looks like any top-end Samsung smartphone in its design, just larger. It also houses the S Pen, a feature first introduced in the Samsung Galaxy Note phablet. In terms of other features, it runs on Android 4.1 Jelly Bean-skinned with TouchWiz and brings a bunch of features we have seen on other Samsung devices such as multi-window, Air View, S Planner, the ability to house a SIM card and more.
Apart from the features on offer, here is a quick look at how the Note 510 stands against the competition in terms of the specifications.

As you can see from the table, the Note 510 brings with it specifications that are better than the iPad mini.

Design
One look at the Samsung Galaxy Note 510 and you will think that the tablet looks like an S III or an S4 on steroids. It has the same design as the smartphones with the only difference being the size of the display. Above the display you have the earpiece and the front facing camera, which is very Samsung Galaxy S III-like. Below the display you have the physical home button along with the capacitive menu and home buttons. The tablet is relatively light at 340 grams and quite slim measuring a 7.95mm in thickness.

The left of the Note 510 houses the SIM card and the microSD card slot and the right houses the power button along with the volume rocker. The top of the tablet has the headphones jack and the bottom has the micro USB port.

The rear of the Samsung Galaxy Note 510 is plastic, standard what we have come to expect from Samsung devices so we cannot really complain here. The right panel of the tablet also houses a socket for the stylus.

One interesting design element of the tablet is that the speakers aren’t at the rear as we have seen on other tablets. There are two speakers that rest on either side of the of the microUSB port at the bottom. So, if you place the tablet on a table, the audio isn’t muffled and that is a very good thing. On the downside, sometimes you may end up covering the speakers if you use the tablet in landscape mode.

Now, if you look at the Samsung Galaxy Note 510’s design, you’ll think it gets the job done. But, if you compare it to the likes of the iPad mini, or the Zync Quad 8, which is a budget tablet, then you realize that there are better looking and in some cases better built. That doesn’t mean that the design of the tablet is bad. If you use it in landscape mode, you have access to all the controls on your right easily accessible by your thumb. If you use it in portrait mode, you have access to them at the bottom of the display, more like a smartphone.

Overall, if you are used to Samsung devices, you will feel right at home here with the design of the Note 510.

User Interface
Straight out-of-the-box, the tablet runs on Android 4.1 Jelly Bean with Samsung’s TouchWiz UI interface overlaying it, the same that is found on all Samsung tablets and smartphones. From the lock screen you have access to five apps that you can access by simply tapping on them and then dragging your finger across the display. You can swipe anywhere on the display to unlock the tablet.

Once unlocked, you have access to the standard five customizable home screens that you can load with apps and widgets. You also have the standard app and widget lists. The drop down notification gives you access to shortcuts such as screen rotation, Bluetooth, data, multi-window, brightness and more.

Since the tablet falls under Samsung’s Note series of device, you get all the shenanigans of S Pen functionality. You have the standard slew of apps such as Notes, Gallery, Videos and more. Air View, a feature that made its debut with the Note 2 is also present on this device. You simply hover over a folder to see its content or hover over a message to see it in detail or simply hover over a video to see the preview. It is quite handy if you are looking for something.

Long-pressing the back button on the Note 510 pulls out an app drawer. This app drawer lists all the apps that you can use in the multi-window mode on the tablet. Yes, the tablet has the ability to run two apps simultaneously on the display. You can have the browser running in the top half while watching a video below. You could be checking your mail and checking out Google maps at the same time. It’s quite a handy feature and one that you will be using quite a bit especially if you appreciate multitasking on the go.

Last but not least, the Samsung Galaxy Note 510 also offers pop-out play functionality. You can watch your videos in a small window on the display of the tablet while taking care of other work.

All the above-mentioned features are available to users on a wide spectrum of Samsung devices such as the Note II, Note 800, Galaxy S4, Galaxy Mega 6.3 and more (the devices that don’t support the S Pen work with the user’s finger instead). We have seen some similar features on the Asus FonePad well.

Another interesting feature of the Note 510 is that it recognises devices connected and launches the appropriate app. If you pull out the S Pen, the S Notes app launches; plug in a pair of headphones and the music and videos apps launches. This is quite a handy feature.

The Samsung Galaxy Note 510 also comes with an app called the smart remote. It houses an IR blaster near the volume rocker and you can essentially set up the tablet to work as a universal remote. This is pretty handy if you want to control your TV, home theatre and more with a single device.

Overall, the features brought to the table by the Note 510 are quite a handful and well-established in the Samsung ecosystem. If you are looking for a device with more than stock Android and some added functionality like multiscreen and a useful stylus, you can consider the Note 510. For a more stock Android option, there are other tablets available.

Performance
Since this is a premium device, let’s see how it competes with other devices in its price bracket. We have also thrown in the benchmark score of the Nexus 7 for good measure.

Compared to other tablets the Note 510 does quite well for itself in terms of the benchmark performance.

Coming to the real world performance of the Samsung Galaxy Note 510, we get a feel of the touchscreen. It is quite smooth, and there was no lag or stutter whatsoever, and the keypad well-spaced and easy-to-use as well.

The Samsung Galaxy Note 510 also supported every video we threw at it natively and all the videos ran very smoothly. The audio output too was surprisingly good – better than most tablets that we have seen. Considering the display is a TFT LCD, the representation of colours and the viewing angles were great indoors. But under direct sunlight, the performance of the display isn’t the best. Nevertheless, the display is vibrant to watch videos and consume multimedia on.

Since the power under the hood is good, the games we played on the Samsung Galaxy Note 510 ran very smoothly. Real Racing 3, Dead Trigger, Angry Birds and more ran very smoothly on the tablet. It was a treat playing the games as the display was good and responsive, audio was clear and the overall performance was smooth.

In our continuous video playback test, the Samsung Galaxy Note 510 ran for a little over 9 hours, which is quite good. We ran a 720p MP4 HD movie on the tablet on loop. The brightness and audio was kept at max and the Wi-Fi was left on.

The performance of the multi-window applications on the Samsung Galaxy Note 510 was also good. It was a treat to Google information in one half of the screen and sharing my findings via mail from the comfort of the display without having to physically switch apps.

Bottom Line
So, if you are in the market to pick up an 8-inch tablet, you have to decide between the iPad mini and the Galaxy Note 510. The iPad mini is better built, doesn’t support voice calling and has a larger apps ecosystem. The Galaxy Note 510 on the other hand has voice-calling, a better display, the S-Pen shenanigans, expandable storage, multi-window capabilities and the Android OS with access to the Google Play store and Samsung app store. Both the tablets are great and your choice should be based on which ecosystem you are a part of. If you have an iPhone, a Mac or any Apple device, then the logical choice is the iPad mini. If you have a Samsung TV (the tablet can act as a remote control for that), Android smartphone or like and want to be a part of the Android ecosystem then this is the device for you. Overall the Note 510 is a great performer with lacklustre build quality.