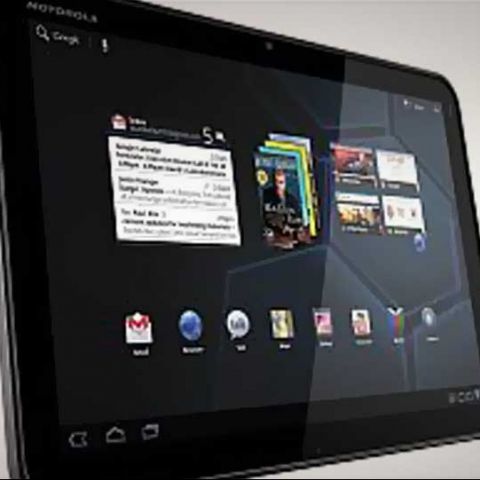 There's a lot to like about the Xoom, especially after tweaks and updates collectively make it a much better device. The biggest problem isn't the Xoom, but the dearth of tablet-friendly apps - it seems only iOS is hot when it comes to this class of device form factor. The Xoom is a good tablet, but really, tablets are little more than the sum of apps that run on them, and at the moment, the iPad has a much better ecosystem.

After the huge disappointment the HTC Flyer was, we were kind of hoping that the Motorola Xoom would at least keep the Android challenge to the Apple iPad alive, something that hasn’t gone too well for the Google-developed OS.

Look & Feel
It is really a case of two extremes here. The solid and classy build as well as different looks are combined in what is (and there is really no other way of putting this) in a slightly bulky form factor. To put this in perspective, the Xoom has a thickness of almost 13mm, while the iPad to has kept its diet in check, at 8.8mm! The Xoom’s design, particularly on the rear panel, amplifies this thickness. The max thickness is at the middle, and the slight curve means the thickness reduces, as you are getting closer to the edges. This slight tapering does help quite a bit with the grip. Weight is again something where the iPad 2 has an advantage. The Xoom tips the scales at 730 grams, while the iPad 2 weighs just a bit more than 600 grams and the Samsung Tab 750 weighs about 570 grams.

However, move beyond the weight issues (really!) and we were pretty impressed by the looks. Glossy black around the display on the front, and a mix of matte black and silver – with certain new design elements. The power key is placed on the rear panel, the logic being that it is easier to reach the key with the finger while holding the tablet in its normal usage position. We really can’t disagree with that one, and quite like the idea. The other thing, and Motorola received some bit of flak for this, is the depressed design of the volume keys. Some say that they are too hidden away, and affect their intuitiveness. However, they do gel in well with the overall design.

Features
Android 3.1 has come with a completely redesigned UI. The home screens now offer the usual info – battery level, wireless connectivity, cellular network info etc. now shows up on the bottom right edge of the display. Tapping on these opens up a more detailed status pop-up, and you can head to the settings menu from here. On the top right corner is where you open up the usual apps list from. The bottom left corner has the return, home and tasks options. We had slotted a Vodafone SIM-card in the Xoom, and any messages that were received on that number showed up as a pop-up on the home screen. This is pretty neat, because the device doesn’t allow voice calls. These SMS’ weren’t stored anywhere, the pop-ups didn’t disappear unless you clicked on OK. The new task manager stacks up thumbnails according to when you last opened the app.

The Xoom that we received for review was the 32GB (Wi-Fi 3G) version.

Performance
[RELATED_ARTICLE]In terms of the power game, the Xoom does pack a significant punch - dual core Tegra 2 SoC, consisting of two ARM Cortex A9 CPU cores running at 1 GHz and 1GB of RAM. In simple terms, apps run much smoother than we expected. Games run smoother than all other Android tablets we have tested till now, Angry Birds fans rejoice! Multitasking didn’t really slow down the tablet at all, and the new task manager introduced with Android 3.1 does make for a visually appealing package. Weirdly though, if you are transferring anything to the Xoom via the data cable, the OS completely freezes and refuses to respond till the file transfer is complete. We faced this problem when sending music and movies to the Xoom’s internal memory.

What makes our eyes tear with happiness is the new web browser! The Chrome-esque UI (the desktop browser version we are talking about!) allows you to stack multiple tabs. We were quite impressed by page rendering speeds, and the fact that pages “snapped to fit” quite seamlessly.

However, we were checking out the browser when we noticed the biggest problem with the Xoom’s 10-inch display – the white colours aren’t really white. The shade is pale, and that will not look good on most web pages. Particularly on the Google search homepage. We kept the iPad 2 right next to it, just to check. After setting the brightness levels to auto brightness, we opened the same websites to compare the brightness levels. Just to be sure, we set the brightness levels to full, and rechecked the web pages. The white colours in the Xoom definitely looked off. No visible issues with the other colours (usually we have witnessed gradation of some colours on some displays), and they were pretty even throughout.

Video viewing was pretty impressive on the 10-inch display, but there was a distinct lack of sharpness, even on HD content. No stutter at all in fast moving visuals, very crucial since the big display is conducive for movie viewing on the move. The 10-inch display on the Xoom, by the way, has a resolution of 1280x800 pixels.

Keeping with the multimedia tune, the speakers didn’t disappoint either. The dual speakers (placed on the rear panel on the black strip – look very tiny though) do pack quite a bit of punch. Clarity is there in pretty generous doses, but as expected, the bass is pretty much drowned out. However, for the occasional music listener – they’ll do just fine.

Android Market, true to expectation, was the new version that has a better interface and more applications with improved segregating categories. However, why this particular tablet (and this applies to the likes of the Samsung Tab 750 etc.) might suffer in the face of competition of the Apple iPad is the lack of “made for tablet” apps. While there was an initial surge of a bunch of such apps, the progress in adding to these numbers has been slow. Apple, on the other hand, has pretty much created the eco-system that is going to take some beating. However, the Xoom does come with some tablet-optimized apps pre-loaded, mostly Google ones – Gmail, YouTube etc. The 3D-esque look to the YouTube interface is pretty impressive.

The 5MP camera is actually very good. The dual LED flash does make a difference in low light conditions. The images overall are pretty vivid, crisp and not ruined by noise, like most of the tablets we have tested. Videos are crisp, but fast moving shots do tend to get a bit blurred. However, this camera will do the job, most of the time.

Battery life, however, is a bit of a disappointment. We were testing this straight after the Reliance 3G Tab, which had amazing battery life. And the Xoom’s battery was clearly having a hard time keeping pace. Fully charged the battery, unplugged the charger, browsed the Android Market for fifteen minutes or so- battery level down to 91%. Web browser for another 10 minutes or so, and the battery dropped by another 10%. However, once it was around 80%, the discharge rate did come down considerably. Used it as a Wi-Fi hotspot for an hour, and watched a few videos and connected this to a set of external speakers to blare out some tunes. The battery did run out completely in about 3 hours. Walking on the lines of the Apple iPad, the Motorola Xoom also doesn’t charge via the USB cable when connected to a PC. The charger provided is very similar to the ones we get with netbooks – at least in size!

Our Take
For a price of Rs 39,990 (32 GB- 3G version) in the market (or Rs 32,990 for the 32GB Wi-Fi only version), the Xoom is certainly doesn’t come cheap. With the Samsung Tab 750 priced at Rs 36,200 (albeit 16GB built-in storage), the consumer does have a choice. However, tablets apps are a bit of a problem with Android at the moment. There’s a bigger problem. It’s uncomfortably close to the iPad 2, a better device in many respects, and certainly so in case of the app ecosystem. The Xoom is for you, only if iOS is a no-no.