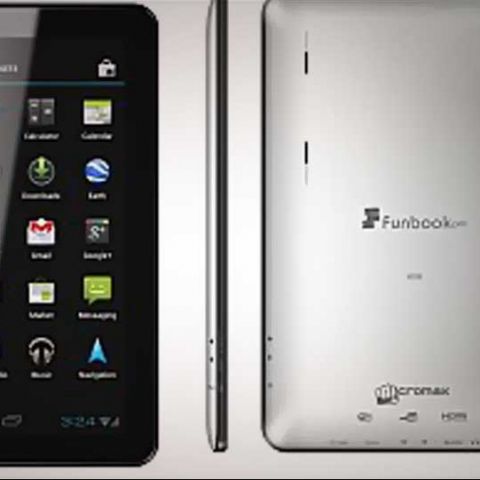 Micromax Funbook Pro is a good device at its price of Rs. 10,000. It has a large 10-inch display, which is great for apps and watching videos. The device does compromise on factors such as Bluetooth and a SIM card slot (and built-in 3G connectivity). If the screen size is a priority, then the Funbook Pro is the tablet for you. Otherwise you can take a look at the Zync Z999 Plus, which is a 7-inch device, has good specifications and has the ability to house a SIM card.

The budget tablet market is flooded with devices that boast of some impressive specifications under the hood and are capable enough to surpass the reputation of being expensive paperweights. But there is one problem. All these devices have the same form factor – 7-inches.

We have seen the occasional tablet appear that boasts of an 8-inch display but there was nothing revolutionary about it. Today we have with us a Rs. 10,000 tablet that boasts of a 10-inch display and a relatively slim form factor. Is the Funbook Pro a 10-inch 10k dream come true, or is it better left untouched?

Design and Build
At first glance, the Funbook Pro looks like the original Funbook on steroids. It has the same build but is larger, heavier and has a bigger display. The front of the tablet is clean with no physical buttons. All it has is the front facing camera. The location of the front facing camera is in the top right hand corner (when held in landscape mode) and feels slightly inconveniently placed especially if you are one who shifts orientation while video chatting. When held in landscape mode, your thumb can easily cover the camera. We wish it were in the centre like other tablets.

All the ports are neatly laid out on one side (right side if held in landscape mode). You have the microSD card slot, DC IN, micro USB port, HDMI out, headphones jack and the power/sleep/wake button. The sleep/wake button is really small and incontinent to use. We wish it were bigger and more prominent. The top of the device has the back button and the volume rocker. These buttons too feel small.

Since the buttons are on the side panel of the device they are really small and fit well into the bezel. This is nice in terms of look but utility isn’t the best.

The front of the device has a glossy finish making it a fingerprint and dust magnet. The back of the Funbook Pro is matte grey, the same that was present on the original Funbook.

Micromax hasn't released the slimness or the weight of the device but it is relatively slim and feels comfortable to hold for prolonged used. For Rs. 10,000, the tablet doesn't feel flimsy or badly built.

Features and Specifications
Straight out of the box, the Micromax Funbook Pro runs on Android 4.0.4 ICS. The device is skinned and anyone who has used the original Funbook will feel right at home with the device. It gives you access to 5 customizable home screens and also gives you access to a Micromax app store apart from the Google Play store. You will need to register to access the Micromax app store and the procedure is as simple as opening an e-mail account.

If you want access to the plethora of apps available globally, you can get that from the Google Play store. But if you want localized content, the Micromax app store is the place for you. The interface of this app store is relatively simple when compared to the Play store but is far better if you compare it to the HCL Me app store.

The content is divided into education, games, movies, apps, entertainment and Live TV.

The educational app is quite interesting. You have access to content from a large number of courses such as MBA, Medical Entrance, CBSE, Engineering Entrance, Commerce, General Education and more. The amount of educational content itself is motivation enough for you to have this device if you are a student. But here’s the catch. The content of the app isn’t available for free. You have to pay for the courses you would like to access.

The movies app gives you access to the BigFlix app. You also have access to local news publications via the app store along with live TV.

In terms of the specifications under the hood, a 1.2GHz processor and 1GB of RAM power the Funbook Pro. The 10.1-inch display has a resolution of 1024x600 and the device has an internal storage of 8GB expandable up to 32GB via a microSD card. The resolution of the front facing camera is VGA.

Overall, the Funbook Pro is packed with features especially if you are looking for a device that gives you access to a plethora of local content.

Performance
Starting with the display, it is quite impressive for a Rs. 10,000 tablet. We feel that the resolution is a little low at 1024x600 and we wish it were higher, maybe 1280x720 at the least. Nonetheless, we ran a few games, apps and videos and the device performed quite well. The representation of colours was nice and we were quite happy watching movies on the device. Having said that the Funbook Pro’s display is very reflective and susceptible to glare. The brightness of the display is average. All video formats and all resolutions ran very well. 1080p mkv files too were smooth and even navigating on the timeline was seamless. It was a good experience.

For its benchmark performance, the scores weren’t very impressive. Its hardware is the same as other budget 7-inch tablets. In some aspects it performed better than the Zync Z999 Plus and in others it was blown away. Take a look at a comparison of the scores below.

The keyboard on the device is stock Android. In landscape mode it may be difficult to type with two figures considering the 10.1-inch display but in portrait mode, the typing experience is comfortable.

Transferring data from your Mac or PC to the device is as simple as plug, copy and paste.

Games on the Funbook Pro were a lot of fun to play. Games such has Angry Birds space make good use of the screens real-estate where as games such as Temple Run which run on portrait mode feel slightly cumbersome.

The inbuilt browser was frustrating to use but then again so was the Chrome browser on the device. It's a bummer that the browser experience is disappointing considering the large display of the device.

A 5800mAh battery powers the Funbook Pro and this is where the tablet is a tad disappointing. In the continuous video playback test, it lasted for a mere 3.5 hours, which isn’t impressive. In terms of real world usage expect the device to last for about 5 hours.

Bottom Line
For Rs. 10,000 the Micromax Funbook Pro is a good device. It has a large 10-inch display, which is great for apps and watching videos. The device does compromise on factors such as Bluetooth and a SIM card slot. If the screen size is a priority, then the Funbook Pro is the tablet for you. Otherwise you can take a look at the Zync Z999 Plus, which is a 7-inch device, has good specifications and has the ability to house a SIM card.