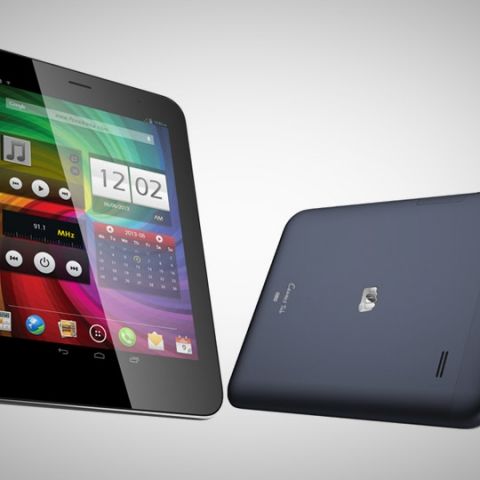 Recommending the Canvas Tab 2 is tough. It’s not that the tablet is bad. The performance scores are good, but the iberry Auxus CoreX4 3G has better benchmark scores. The Galaxy Tab 3 is more comfortable to hold as a phone and comes with the Samsung suite of preloaded apps, which are fairly decent and more attractive to users.

We have seen devices such as the iberry Auxus Core X4 3G, Asus FonePad and more launched to take on the Tab 3. Today we have with us the Micromax Canvas Tab. Priced at Rs. 16,000 the tablet showcases the ability to make calls and has an 8-inch IPS display. Is it a worthy contender?

At a glance
Starting with the specifications, the Micromax Canvas Tab boasts of Wi-Fi and 3G connectivity. It has an 8-inch display with a 1024x768 pixel resolution and is powered by a quad-core 1.2GHz CPU (MediaTek MT8389 chipset) coupled with 1GB of RAM. The device has 16GB built-in storage expandable via a microSD card. The rear of the tablet has a 5MP camera and the front has a 2MP camera for video calling. The device is 9.6mm in thickness and weighs 400 grams making it a bit heavy. A 4800mAh battery powers the entire package.

Here is a quick specifications comparison between the Micromax Canvas Tab and the Samsung Galaxy Tab 3 211, iberry Auxus CoreX4 3G, Zync Quad 8 and the Asus Fonepad 7.

Design
To start with, the tablet is wider than the Galaxy Tab 3 because it has an 8-inch display. This is very uncomfortable to hold while making calls. It’s too wide to fit comfortably in a single handgrip. The aspect ratio of the display too is 4:3. The aspect ratio works fine for viewing websites, books or games but you will have two large black bars when you watch 720p or 1080p videos on the device, wasting a lot of space.

The front of the Micromax Canvas Tab doesn’t have any physical buttons. Above the display (when held in portrait mode) you have the earpiece accompanied by the front facing camera. Surrounding the display you have a chrome strip. The rear of the tablet has a design reminiscent of the Canvas Doodle 2. It has a grey finish, something we have seen and liked on the Zync Quad 8. The rear houses a camera without a flash and the speaker. The top has the headphones jack, microUSB port and the power button. The right of the tablet houses the volume rocker and a flap below which rest the microSD card slot and the SIM card slot.

The Canvas Tab comes with a flap cover in the box. The biggest downside is that the plastic shell, which covers the back of the device also covers the microSD, and SIM card slots. So, if you need to remove these, you will have to remove the back panel.

The flap that covers the display is interesting too. This flap also folds into a stand, which helps the device rest. It’s quite sturdy and ideal for use on the inflight tables to prop up the device and enjoy a movie. To put things in perspective, the flap cover that doubles up as a stand on the Canvas Tab is sturdier to prop up the tablet than the iPad’s Smart Cover.

Overall, the Micromax Canvas Tab is well built but it is heavy weighing 400 grams. The 8-inch form factor is something that we have seen in the past and it works as a tablet, but to hold against your face and make calls, we think not.

UI and Interface
The Micromax Canvas Tab 2 runs on Android 4.2 Jelly Bean and there is slight customization to the OS, but nothing too major. For the most part, the UI is stock Android. The device comes preloaded with the M!Live app. M!Live gives you access to local Indian content such as ringtones, wallpapers and more.

The rest of the UI is standard Android with the apps and widget listing page and the customizable home screens. The device doesn’t come with any preloaded bloatware and that is a good thing as you have access to the Google Play store for all your app needs.

Performance
Since the tablet is priced at Rs. 16,000, lets take a look and see how it compares to other tablets in the same price range such as the Samsung Galaxy Tab 3 first gen Nexus 7 and the iberry Auxus CoreX4 3G.

From the above benchmarks it is clear that the iberry Auxus CoreX4 3G is the best performer overall in terms of the benchmarks. It scores better than the first generation Nexus too. The performance of the Canvas Tab can be described as average when compared to the benchmark scores of the competition. It does perform better than the Galaxy Tab 3 though.

The day-to-day performance the Canvas Tab is quite smooth. The device is quite wide and heavy to hold but if you place it on a table, typing on the device is a breeze. The keyboard is responsive and so is the touchscreen.

Heavy-duty apps and games take some time to load on the tablet and if you multitask on the device a lot, you will notice some stutter.

The 8-inch display has a 1024x768 pixel resolution giving it 160ppi pixel density. Content on the display lack details and the display itself is reflective. The viewing angles are good but we wish the resolution was better. At full brightness, the display performs well and you’d be advised to keep the brightness on the higher side to enjoy working on the tablet.

Speaking of games, most of the popular ones worked on the tablet. Graphically heavy games (Real Racing 3) were met with some lag and there were some levels in Angry Birds Star Wars as well that stuttered when the action got too intense on screen.

The calling capabilities of the tablet are good as well. There isn’t any audio leak from the earpiece. The only downside is that the device is very uncomfortable to use as a phone.

The native video player is the same that we have seen on the Canvas 4 and the Canvas Doodle 2. You can swipe up and down on the left to control the brightness and do the same on the right for the volume. You can also watch the videos in a small window on the display letting you use other apps while watching the video. Just like the Canvas 4, the Canvas Tab also boasts of the “Smart Pause” feature, which is that the video playing will pause once you look away from the screen. On the Canvas 4 this worked very well for me during the testing process. On the Canvas Tab however, it seems buggy. There were times when watching a video, it paused randomly. There were also times when I looked away and it took a second too long to pause making the feature feel rather gimmicky.

The device was a treat to watch videos on. We saw the standard array of videos on the device ranging from MKV to MP4 and AVI. The videos were plagued with the same problem that we have seen on other devices running the MediaTek chipset. You have the issue with MKV files where only the video runs and the audio isn’t recognized. Surprisingly, the native video player crashed when we ran
AVI files on it, a problem we faced on the Doodle 2 as well.

In terms of its battery life, the Micromax Canvas Tab lasted for a little over 5 hours in our continuous video playback test. In the test, we ran a 720p MP4 movie on loop with the brightness and volume set at maximum. The Wi-Fi of the tablet was on as well. This means that under regular conditions, the tablet should last you longer under conserved conditions.

Bottom Line
Recommending the Canvas Tab 2 is tough. It’s not that the tablet is bad. The performance scores are good, but the iberry Auxus CoreX4 3G has better benchmark scores. The Galaxy Tab 3 is more comfortable to hold as a phone and comes with the Samsung suite of preloaded apps, which are fairly decent and more attractive to users. If activities such as gaming, reading books, browsing the web, etc. are your requirements, you can consider the Canvas Tab.