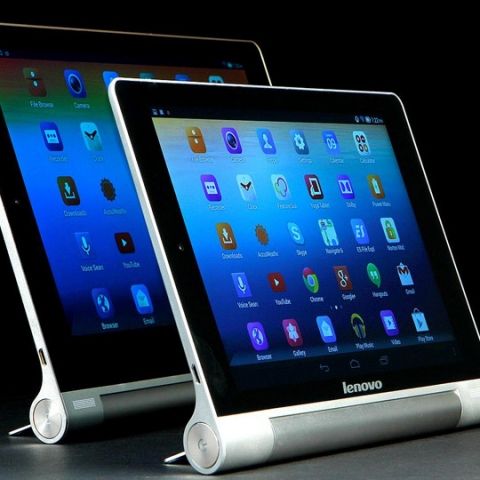 The Yoga 8 tablet by Lenovo is a well-built device with great design and sturdy performance. The tablet definitely gives the Nexus 7 (2013) a run for its money.

With the world shifting to tablets, it was quite obvious that PC makers would jump into the market and start producing tablets themselves. Lenovo, for instance, has already launched a series of tablets one of which is the Yoga 8. Available for a lower price than the Nexus 7 Wi-Fi LTE (2013), it offers a good set of specifications and a design worth every paisa spent.

The Lenovo Yoga 8 tablet runs on Android 4.2 with a custom UI layer on top, is powered by a 1.2GHz quad-core MediaTek processor with 1GB of RAM, and has 16GB of inbuilt storage with a microSD card slot to expand your memory. It comes with an 8 inch IPS display with a resolution of 1280x800 pixels, a 5MP rear camera, a 0.3MP front camera, 3G SIM slot, Wi-Fi, Dolby stereo speakers and a huge 6000mAh battery.

The main USP of the Yoga 8 is the way it has been built. Lenovo has done well in the build and design department by giving the tablet a magazine like shape. The left spine of the tablet (when it’s held in portrait mode) has a round bulge where Lenovo has crammed in the various ports, buttons, battery and a kickstand that can be folded in.

The tablet’s build metal all around which makes it look and feel quite sturdy. The hinge on the kickstand also seems quite strong and didn’t show any signs of being flimsy. Opening the kickstand unveils the microSD card slot and the microSIM slot which were honestly very difficult to use. When you push in a card, it completely vanishes which makes it really difficult to remove it later.

The curved bulge includes the 5MP camera at the back, the audio jack on the right and the power/lock button on the left which has a notification light. On the front there are stereo speaker which support Dolby audio technology. This cylindrical curve allows the rest of the tablet to be very slim and also houses the volume keys and the microUSB port.

The only downside of the tablet is the display. Although the 8 inch display has a decent resolution of 1280x800 pixels, the quality somehow isn’t up to the mark. The glass on top of the display is even worse as it’s very reflective and is prone to fingerprints and smudges.

The tablet feels great to use and with the kickstand, it is excellent for watching movies and videos. The curved shape on the left allows you to hold it like a magazine which makes it convenient when you are reading long articles or even e-books.

The Yoga 8 runs on Android 4.2 with Lenovo’s custom UI on top which comes with a few themes to change your icons and a few wallpapers. We noticed that Lenovo has removed the menu drawer from the UI which means that all your apps are dumped onto different homescreen pages, just like iOS. On use, the OS seems quite stable and the tablet didn’t show any signs of being sluggish while running multiple apps.

Synthetic benchmark test results showed that the Yoga 8 performs quite well. On comparison it came close to the 2013 version of the Google Nexus 7. 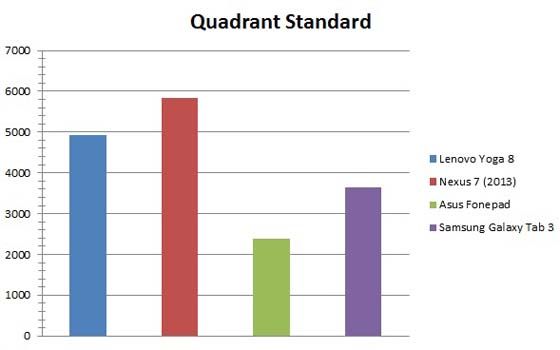 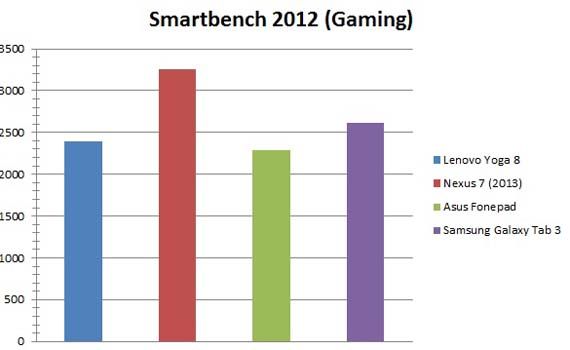 For gamers, the Yoga 8 comes with a PowerVR SGX544 GPU which isn’t the best, but it performed considerably well as games like Real Racing 3 and FIFA 14 ran pretty smooth. We tried Asphalt 8 but for some reason the game was buggy and ran terribly slow.

The battery performance on the tablet blew us away thanks to the 6000mAh rated battery. We ran our standard test by running a full HD video on with full brightness. We saw a loss of just 8 per cent in one hour. This means, on full charge, you can continuously run a full HD video for 12 hours on this machine.

Watching videos and movies is a pretty good experience on the Yoga 8. The Dolby speakers on the tablet are quite loud and offer crisp audio and are better than a lot of tablets that we have tested. The tablet supports almost all the video formats we tried and it played full HD videos without any issues. There is a huge battery which offers great backup, but we wish Lenovo had not compromised on the quality of the display.

The camera on the Yoga 8 is disappointing as it doesn’t offer much in terms of features or quality. The 5MP camera just manages to click pictures and videos aren’t any good either.

But, if you think the Nexus 7 is too plain for you, then you should definitely go for the Yoga 8 as it offers a great design and a premium finish. Of course, it isn’t as good as the Nexus 7 in the performance department, but it is quite stable and faster than most of the tablets out in the market today. You can also consider the Apple iPad Mini which is also available around the same price segment