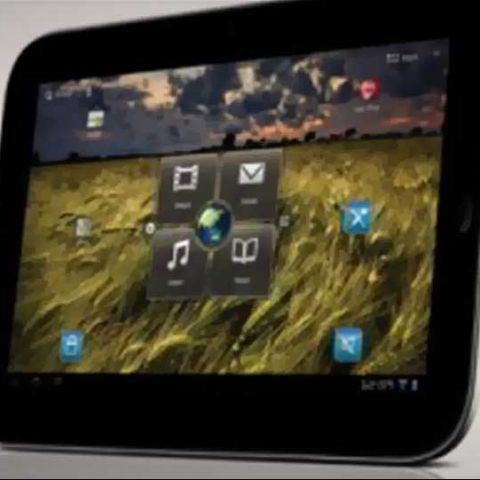 The K1 does impress considerably with the sheer performance. It doesn't slow down even with multiple apps installed and running in the background, something that bugs most Android devices. However, the build quality is disappointing, and the K1 does heat up quite a bit even after 20 min of web browsing. Not surprisingly, we would recommend the Motorola Xoom or the slightly more expensive but much superior Samsung Galaxy Tab 750.

Is it just us or are you also getting the feeling that every brand wants to be in the tablet market just for the sake of it? The Lenovo K1 isn't the first tablet that gives us this feeling, however.

Look & Feel
Looking at the K1, we cannot help but compare it to the Motorola Xoom, at least as far as the form factor is concerned. However, uniquely it has a physical button for Home, something we haven’t seen on Android 3.0 and beyond devices. This is a touch sensitive button, and can also work as a back button when you use that gesture. Flip it over, and the plastic back has a pattern that helps with the grip. However, disappointingly, the plastic used feels cheap and flexes very easily. The camera isn't placed very well either, and you can easily block it when holding the tablet in landscape mode. We had a similar problem with the Acer Iconia Tab A501 that we reviewed recently.

All ports and slots are on the side panels, and the likes of the volume rocker and the power key feel cheap and flimsy as well. Not that they run the risk of coming out, but does leave a bad taste after you have spent well over Rs 30k for a tablet.

Features
The poor build quality aside, the K1 does impress with the feature set. Powered by an ARM Cortex A9 1GHz dual core processor and 1GB of RAM, the K1 comes with Android 3.1 preloaded. The 10.1-inch display has a resolution of 1280x800 pixels. The version that we received for review was the 32GB storage version, and yes, there is a memory slot to expand storage space. Wi-Fi and 3G connectivity options as well.

Interestingly, Lenovo pre-loads a bundle of worthwhile apps with the tablet – a whole host of games included. Also, Lenovo’s own App Shop works parallel to the Android market. Weirdly, this preloading of customized apps means we have two gallery apps, two music apps etc., both with similar names! It is a little difficult to understand what that is all about! However, the likes of Angry Birds HD, Need for Speed Shift HD etc. make some sense.

Performance
We must give credit where it is due – the performance is excellent. The dual core processor along with 1GB of RAM does ensure a smooth Android experience. We were very impressed by the way the K1 doesn’t slow down under app load, something we have noticed with most high-end tablets and smartphones. The interface remains slick, and wouldn’t slow down or freeze. Even games were delightfully smooth. Having said that, we did face a surprising issue once. There was a system update for the tablet, which we downloaded, once we got the notification. The K1 restarted as it should, but the problem was that it was really slow until we restarted the device. Post that, we have faced no issues with any slowdowns since.

What made that experience even better was the fact that this 10.1-inch display is quite crisp and bright. It is sometimes too bright, if you haven’t activated the auto brightness setting. Viewing angles are decent, but wont really work as well as it did on the Galaxy Tab 750, at much wider angles.

However, it is considerably disappointing to find out the tablet heating up quite a bit even after just 15 minutes of web browsing on Wi-Fi. The back panel becomes uncomfortably warm.

Battery life isn't the best around, but while we can’t really criticize it, the iPad still stays in its own league. To illustrate, we have a real life usage example - we fully charged this tablet in the afternoon, and by night, it was still well above 90%. A bit of web browsing and app downloading before sleeping (battery at 79%), and the K1 remained on standby all night. The next morning, the battery was down to 28%. While you will have some battery left to begin work the next morning, this battery discharge on standby is a bit of a worry. Maybe turning off location services and Wi-Fi will help.

Our Take
Well, for a box price of Rs 31,990 we don’t really think this is the ultimate package – only let down by the bad build quality. For slightly less cash, you can buy the Motorola Xoom, which does offer similar performance but better build quality. Or if you are ready to spend about Rs 1.5k more, then the best Android tablet, the Samsung Galaxy Tab 750 is an option.