Lenovo CG Slate Review: Much better than handing over your phone to your kids 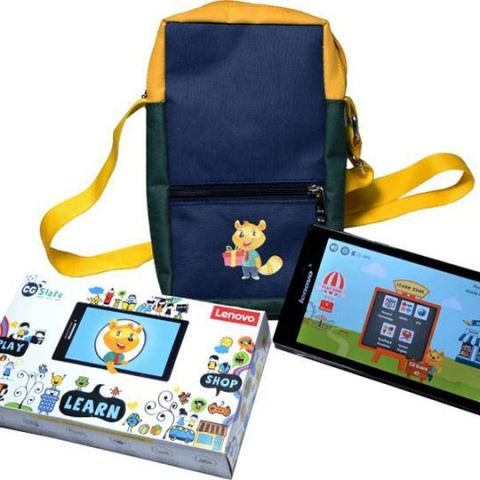 The CG Slate tablet and the software it bundles is far from perfect, but it is enough to keep your kids engaged. Also, since the educational content is designed to follow school curriculum, your kids will get a good mix of fun and learning. While the tablet does allow parents a full-fledged Android experience, children using it will be restricted to a safe sandbox. This makes it a good tablet to hand over to kids unattended.

The CG Slate Tablet is an infotainment cum education tablet for kids running on a Lenovo Tab3 7 tablet as the base device. The tablet's user interface is skinned with a custom software (app) designed by Convegenius. A 64GB SD Card is bundled with custom content specially created for kids as well. Once you fire up the tablet, you will be welcomed with the custom child-friendly UI, protected by profiles for the parent and child. These profiles provide different access controls. That means if you are a parent you can exit the “CG Slate for Kids” app and use the device like any other Android tablet. The child profile is restricted to the app environment. On a fresh restart, the tab will always boot into the kids app.

The initial setup was fairly easy, though it did take a bit of time for it to initialise the environment on its first run. Because ours was a demo unit, we faced a few niggles with licensing but the Convegenius customer support was very responsive and we were able to resolve them in no time. In the normal course of things, a purchased unit will have a QR code in the box which needs to be scanned through the CG Slate app to obtain a licence key. Since our box didn’t have the QR code, the folks at Convegenius had to generate a new code for us.

Incidentally, if you have a spare tablet or phone which you’d like to “convert” to a kids tablet, Convegenius sells the SD Card with content (and licence) separately as well. Last we checked, there were three variants of these SD Cards starting at Rs. 1,999.

The more appropriate subheading here would be what’s in the bag. That’s right. The tablet comes in this cute little sling bag which any kid will appreciate and love to swing over their shoulders. There are also a number of goodies such as stickers, book labels, bookmarks, keychains and coasters thrown in. All these feature Titu – the CG Slate mascot – who's always there to greet kids whenever they switch on the tablet. You'll be seeing more of this Titu character in the app as it is tasked with handing out useful tips on how to use the software. 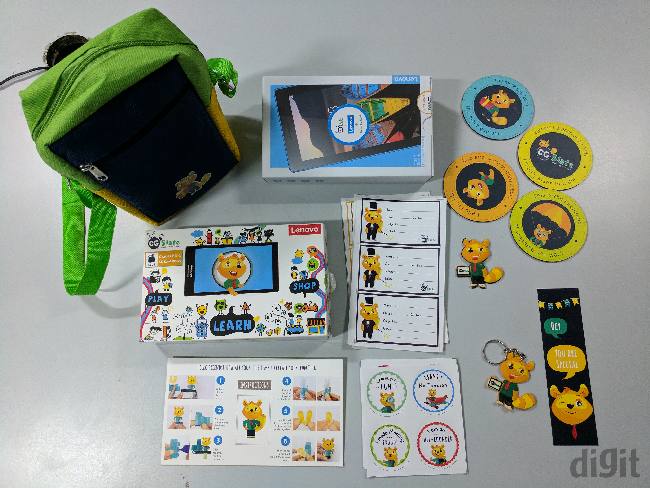 The Lenovo Tab3 7 is a fairly standard tablet, in the sense, there are no hardware level customisations or physical enhancements to the body done by Convegenius to make it especially user-friendly for kids. This is unlike the approach taken by the erstwhile Mosti Chota Bheem tablet which had large buttons and a rubberised easy-to-grip body. The CG Slate feels sturdy enough though. But we wish it came with a child proof cover – something that could withstand the rigours of daily usage by little brats. 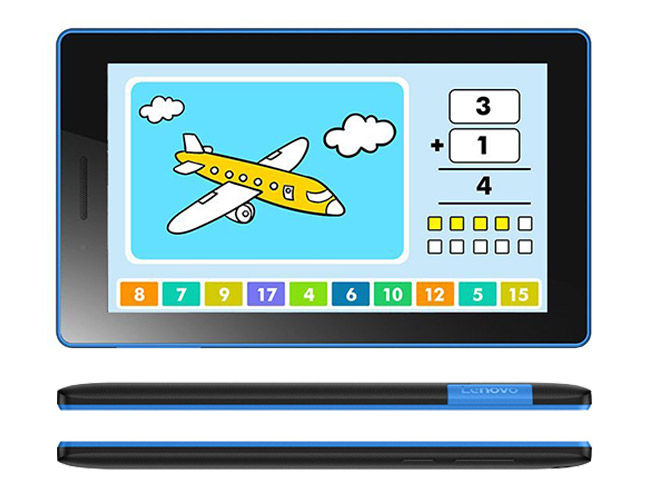 The last time we tested a kids tablet, it was back in April 2015 when we compared tablets like the Intel Eddy G70, the Mosti Chhota Bheem tablet and a few others. Running the same set of benchmarks (in order to get a like-for-like comparison), the CG Slate obviously blew past the scores generated by the older-generation tablets. But benchmark scores aside, we found the performance to be fairly decent for the singular purpose it is designed for – entertaining and educating kids. Lag, delays and stutters don’t cause them as much grief as they do to us. Kids will hardly notice the lack of RAM or the underpowered CPU. The videos bundled with the tablet don’t stutter, the brightness levels are just fine for indoor usage, and the app loads fairly quickly. What more does a kid want? The only thing we have a complaint about was the speaker volume. It should’ve been stereo and a bit louder. Here are some ancient benchmark scores of the older kids tablets we hadd reviewed to get some idea about performance:

The CG Slate for Kids app, which is the default environment kids will generally deal with on this tablet, is reasonably well designed. It has access control built in, in such a way that it can be just handed over to children after the initial setup. You won't have to worry about them accessing content that is inappropriate for their age. The trouble is, it doesn’t work each time. On some occasions, when we’d spam the home button or kill all apps, it would work and let you wander about the underlying Android UI freely. Of course the “restrictive mode” would soon kick in and take you back to the CG Slate UI if you didn’t enter the parent pin. 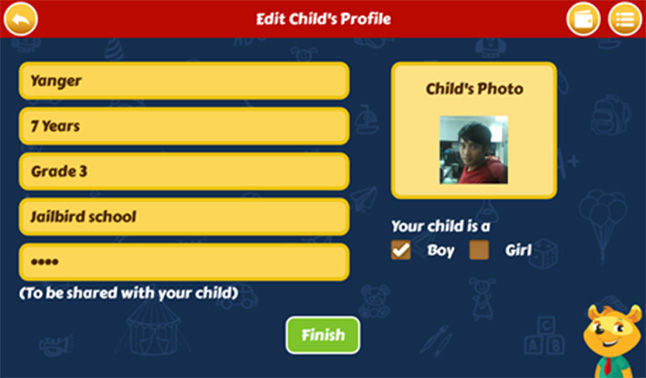 As a parent, you get to create profiles for your kids and the content customises itself for the appropriate age of the kid. For testing purposes, we created three profiles – one a 5-year old Grade 1 child, one 7-year old, and the other a 10-year old Grade 5 child. The video lessons in the learning section automatically changed to the child’s age and education level. The content is mapped to the NCERT syllabus followed in the schools. It seems they have sourced (or licensed) content from a lot of sources like Mexus Education, Chipper Sage and makemegenius.com. Convegenius claims there are over 3500+ educational modules bundled via the device’s memory card. 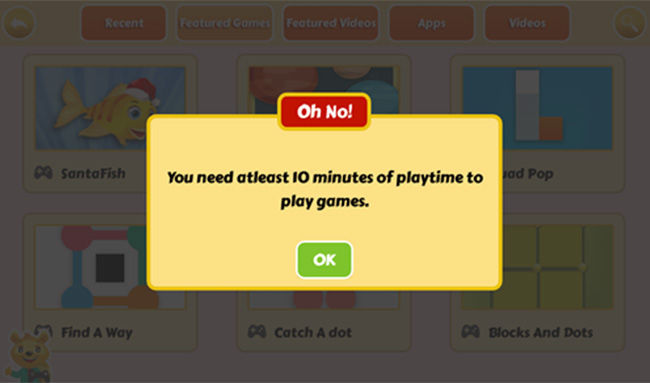 These are comprised of audio-assisted storybooks, animated videos, and quizzes. Most of the educational videos are in an Indian accent and we noticed a few places where mispronunciations were present. On the other hand, an Indian accent could make the content more relatable to kids. The training videos are locally stored, however, the featured videos in the Play Time section are played from some web source, so the tablet will need to be connected in order to view these “fun” videos. But the “learning” videos are always available. The entire content is divided into three zones – learn zone, play zone, and shop zone. The child has to spend time in the learn zone before being credited with time for the play zone. It was strange that as a parent you cannot add more time to the play zone. That means there is no way to “cheat”. If your child wants to have fun, she will have to spend the requisite time in the learning zone. One of the things we noticed was that while the learn zone adapts to the age of the child (according to the age entered in the profile initially), the play zone remains static. That means the same selection of "fun" videos deemed appropriate for a 5-year old will be shown to a 10-year old as well. 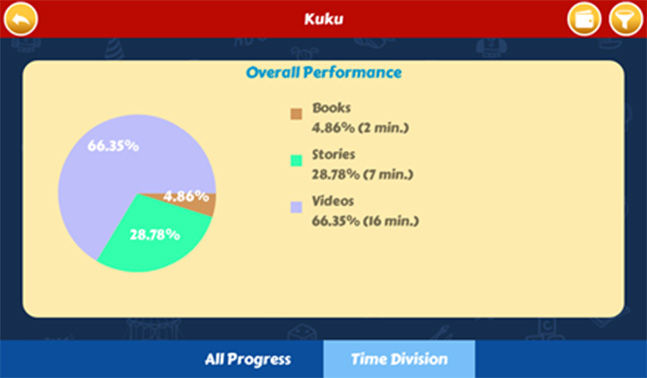 The software also generates fairly detailed reports to quickly assess how well your child is doing. It even has support for SMS reports.