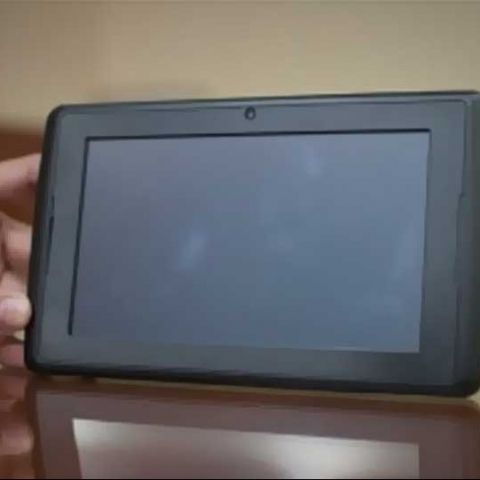 Lava E-Tab performs well for a tablet priced under Rs. 6,000, and beats its closest competitor, the UltraTab A100, hands down. For the price you pay, you are getting a capacitive screen, decent power under the hood and a respectable build. You can consider this tablet over its competition. But remember, the viewing angles are bad, the tabley does lag a bit and the browsing experience isnï¿½t the best.

In the past few months, budget tablets have flooded the market. Initially we saw devices begin breaking the Rs. 10,000 price barrier, boast some impressive features and specifications, such as Android 4.0 ICS out-of-the-box, a 1GHz processor, and decent memory.

Today we have tablets that are closer to the Rs. 6,000 price point, yet boast of similar specifications. Are they bang for your buck products, or are they better left untouched? We take a close look at the Lava E-Tab:

Design and Build
One look at the device and it reminds you exactly of the Zen UltraTab A100 that we reviewed sometime back. It has the standard 7-inch display that most budget tablets bear. The body is made entirely out of plastic and it has a matte grey finish at the back. The sides of the tablet have a nice textured finish to it adding a grip. This makes holding the device very comfortable.

Since the tablet runs on Android 4.0 ICS, there is no need for physical buttons on the face of the device. The front of the Lava E-Tab is clean, and houses a single speaker that is positioned on the left of the display (when held in landscape mode). The front also has the VGA camera for video chatting. The tablet compromises on a rear-facing camera and it isn’t missed.

In terms of the connectivity options, the Lava E-Tab has all the ports neatly laid out at the bottom (in portrait mode). You have the headphones jack, microSD card slot, microUSB port and DC in.

On the right of the E-Tab, you have two rockers. One acts as the volume rocker whereas the other is the on/off/sleep/wake button and the home button.

The tablet compromises on a SIM card slot and Bluetooth connectivity, but then again, we don't expect their presence in a tablet priced under Rs. 6,000.

All in all, the design and build of Lava E-Tab quite good for a low-end budget ICS tablet. We especially appreciate the grip added to the sides.

Features and Specifications
Under the hood, a single core 1.2GHz processor and 512MB of RAM power the Lava E-Tab. It runs on Android 4.0.4 ICS, and there is no information on whether the device will be upgradable to Android 4.1 Jelly Bean.

The E-Tab sports a 7-inch display with a 480x800 resolution. It has 4GB internal storage expandable up to 32GB via a microSD card. It comes with a few preloaded apps and games such as chess, Fusion, Hungama, Pizza Ninja, Solitaire and more.

One good feature of the Lava E-Tab is that from the lock screen, you can directly access your open apps. The lock screen is the same as any other ICS device. The lock screen can be swiped in a particular direction to access the open apps or swiped right to reach the home screen.

There is no prominent skin on the tablet but there are a few tweaks than have been made to the OS. You have access to five customizable home screens and the bottom of the screen has the ever-present back, home and multitasking touch buttons along with volume controls. The app icons in the app listing menu are larger than what we are used to seeing by default and that isn’t necessarily a bad thing. Notably, the Lava E-Tab also has access to the Google Play store.

Performance
On paper, the specifications of the Lava E-Tab are the same as the Zen UltraTab A100 but in real world usage, the performance of the E-Tab is significantly better. Take a look at the benchmark score comparison below.

As you can see from the above scores, the Lava E-Tab performed better everywhere except for the browser test. In the real world, the performance was far better as well – for everyday usage, the device worked fine. Because it features just 512MB of RAM, we did see some lag here and there, but the overall performance can be stated as good.

Unfortunately, the Lava E-Tab isn’t very good at multitasking. The half a gig of RAM unfortunately is not enough, and if you have a plethora of apps working, you will see a noticeable lag in the interface.

The layout of the keyboard is the same that we find on other 7-inch tablets but its response is questionable. There were times when it responded to a feather touch and there were times when prominent clicks went unrecognized. Browsing the web on the Lava E-Tab was relatively good although the loading times are long especially for heavy websites. Changing the orientation while browsing the web too saw quite some lag.

For navigating apps and playing games, the response of the touchscreen was good. The display doesn’t deliver the best viewing angles however, with the slightest tilts causing the colour temperature to change. The display is quite reflective as well, making it susceptible to glare. We saw a few videos on the device and though they ran well, we had to hold it at an angle to get the best view.

The Lava E-Tab has a 2800 mAh battery. Lava claims that you can get 5 hours of browsing time. On our continuous video playback test, the device lasted for 5 hours. We played an SD video in loop. The brightness and volume on the tablet was full and it lasted for 5 hours. For average everyday use the device should last you for about 6 hours.

Bottom Line
For a tablet priced under Rs. 6,000, the Lava E-Tab performs well. It beats its closest competitor, the UltraTab A100, hands down. For the price you pay, you are getting a capacitive screen, decent power under the hood and a respectable build. You can consider this tablet over its competition. But remember, the viewing angles are bad, the tablet does lag a bit and the browsing experience isn’t the best.