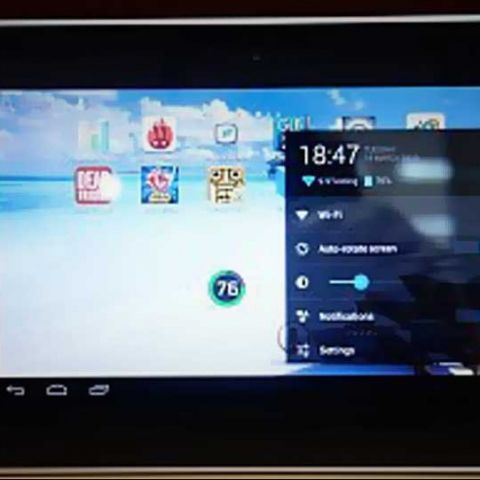 The Lava E-Tab Xtron is quite an impressive tablet at its price. If you are in the market to pick up a budget tablet, you can definitely consider the Lava E-Tab Xtron along with the WickedLeak Wammy Desire before making your purchase decision.

Budget tablets running Android 4.1 Jelly Bean have been sprouting all over the place. The sub-Rs. 10k price segment is flooded with a sea of tablets, each trying to offer some feature that distinguishes it from the crowd and yet compromising on some essentials to maintain the low price point. One such example is the WickedLeak Wammy Desire, which has a 7-inch display, great build and Jelly Bean OS but the battery life of the tablet is really poor.

Today, we have with us the Lava E-Tab Xtron. This tablet boasts of some pretty good specifications for the sub-Rs. 7k price point. Is it worthy of being your first budget tablet?

Design and Build
For a tablet priced at Rs. 6,499 the Lava E-Tab Xtron’s build is quite impressive, as impressive as the WickedLeak Wammy Desire was when we first saw it. The face of the device has the standard 7-inch display and there are no physical buttons on it. The front houses the 2MP camera for video chat, and the tablet compromises on a rear-facing camera.

The back of the Lava E-Tab Xtron is plastic but with silver metal finish to it. It is really smooth and even it delivers a good feeling, it is slippery, which could be bad for clumsy people. Thankfully, the rear of the tablet has a distinct curve to it, which adds to the grip. However, because of the curved back, the tablet can swivel and tilt on a table with ease, and that isn’t necessarily a good thing.

When the Lava E-Tab Xtron is held in landscape mode, we have the headphones jack and the microSD card slot on the top of the tablet, and all the other connectivity options – microUSB port, volume rocker, power and back button – rest on the right. The tablet is quite slim at 11.5mm, and light at 350 grams. It is a comfortable piece of hardware to hold. Overall, the build of the E-Tab Xtron is quite good especially considering the price point.

Features and Specifications
The specifications of the Lava E-Tab Xtron include a 7-inch display with a 1024x600 pixel resolution, giving it a pixel density of 169.55ppi. It also sports a 1.5GHz Cortex A9 processor along with 1GB of RAM and the Mali 400 GPU. It comes with 8GB built-in storage expandable up to 32GB via a microSD card. A 3200mAh battery powers the entire package. The Xtron runs on Android 4.1 Jelly Bean. The tablet however compromises on Bluetooth connectivity.

In terms of its features, the E-Tab Xtron offers a vanilla Android experience. From the lock screen you have access to the camera and Google Now. Once unlocked, you have access to the standard five home screens to customize with apps and widgets. There are the back, home and multitasking buttons on the bottom left of the touchscreen. It doesn’t come with any preloaded apps, but you do have access to the Google Play store to satisfy all your app needs. In the box of the tablet however, you do get a bunch of goodies that can be used to give you additional content on your tablet. You have access to 10 pieces of content from Hungama.com, a one-month membership of BigFlix and one month subscription of meritnation.com.

Overall, the specifications of the E-Tab Xtron are what we have come to expect from budget tablets. The addition of free goodies is nice especially since the contents are local.

Performance
We were impressed with the Lava E-Tab Xtron’s display, especially considering the Rs. 6.5k price tag of the tablet. We saw a bunch of movies, played games, ran apps, browsed the web and YouTube, apart from reading a few e-books. Throughout, we found the display to be crisp and vibrant. Although you can make out some distortion when you read e-books, it isn’t as much as we have seen on other tablets in the same price range. Videos look crisp, apps ran smoothly and the touch response of the keyboard too was good.

Being an IPS display, the tablet has some good viewing angles too. The audio output from the E-Tab Xtron’s speaker is clear, if a little soft. Transferring data to the E-Tab Xtron from a Mac or PC can be done via drag and drop.

The overall performance of the Lava E-Tab Xtron is smooth. Sure, it is plagued with the same slight hesitation and lag found on all budget Android devices, but that is too be expected. While setting up the device for the first time after a factory reset, we saw quite a bit of lag, but once the tablet was fully set up, it responded quite well.

Games like Temple Run and Angry Birds ran very smoothly on the E-Tab Xtron. But playing the super graphics-intensive Dead Trigger saw quite a bit of lag, especially when the action heats up on screen. The benchmark scores of the tablet are quite impressive. In some of the benchmarks, the Lava E-Tab Xtron performs better than the Samsung Galaxy Tab 2, which is considered as one of the better mid-range tablets. In two benchmarks it performs better than the iberry Auxus CoreX4 3G tablet with has a quad-core CPU. Purely on the ground of the benchmarks we can say that the Xtron is a really good performing tablet.

In its multitasking, the Lava E-Tab Xtron was quite smooth until we had Dead Trigger and other heavy apps running in the background. At this point, even the browser started lagging. For average daily use the multitasking performance of the tablet was good.

A whopping 3500mAh battery powers the Lava E-Tab Xtron. The one problem we have with the tablet is that its battery takes forever to charge. It was at 60% at 11am and it was nearly 4pm by the time the battery reached 100%. This might be a result of the loose microUSB charging port, which made the charger cable slip out repeatedly. In our continuous video playback test, the Lava E-Tab Xtron lasted for three hours. For this test, we had the brightness cranked up to full and the volume on max. At three hours, the battery life is a bit low especially since the battery takes a really long time to charge.

Bottom Line
For a sub-Rs. 7k price point, the Lava E-Tab Xtron is quite an impressive tablet. The display is fantastic and the overall performance is good it does compromise on Bluetooth, the on board speakers are a bit soft and the tablet does lag while running heavy games and multitasking. But on the bright side, the display is great for reading books, browsing the web and consuming multimedia content. The battery life is average. If you are in the market to pick up your next budget tablet, you can definitely consider the Lava E-Tab Xtron along with the WickedLeak Wammy Desire before making your purchase decision.