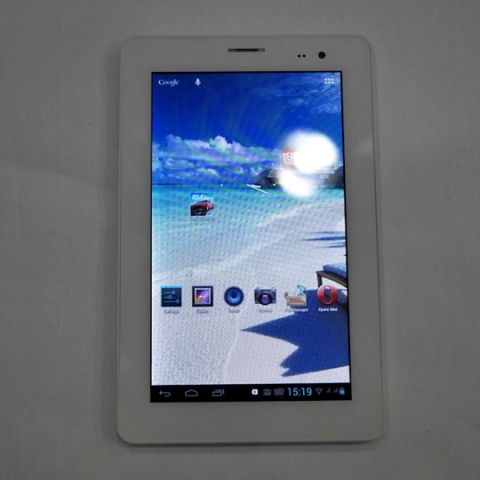 For the price point it’s hard to recommend the Lava E-Tab iVORY. As a tablet, the performance is average at best. You have tablets such as the first generation Nexus, Simmtronics Xpad mini and the Lava E-Tab XTron Plus that are better value for money products. If calling capabilities on a budget 7-inch device is something that you are looking for then you can consider this tablet. If pure tablet performance is a requirement, then you have other options to choose from.

The Lava E-Tab iVORY is priced at Rs. 9,000 and boasts of dual-SIM capabilities. Lava has launched a few interesting products in the past such as the E Tab Xtron Plus and more. With a slew of great tablets available under the Rs. 10,000 mark, is the E Tab iVORY worth a glance?

At a glance
Starting with the specifications, the Lava E-Tab iVORY has a 7-inch display with a resolution of 1024x600 pixels giving it a pixel density of 169ppi. A dual-core 1.2GHz MediaTek processor along with 1GB of RAM powers the device. It has 4GB built-in storage expandable via a microSD card. It has a 2MP rear facing camera and a 0.3MP front facing camera for video calling. A 2800mAh battery powers the package.

Here is a quick look to see where the Lava E-Tab iVORY stands against the competition, which includes the first-generation Nexus 7 and the Simmtronics Xpad Mini.

Design
The Lava E-Tab iVORY has your standard run of the mill budget tablet build. The bezel surrounding the display is quite thick and the display looks like it’s beneath a thick layer of glass. You can make out this depth if you look at the device from an angle.

The rear of the tablet has a metal panel with a gunmetal grey finish. It houses the 2MP camera in the top left corner and doesn’t have a flash. The bottom of the rear panel also has the loudspeaker. The top of the tablet has the power button and the headphones jack. The left has the two SIM card slots and the microSD card slot. These slots are open and we wish there were a protective flap covering them. The right has the volume rocker.

Overall, the build of the tablet is average. The buttons feel cheap too. We have seen other tablets such as the Lava E-Tab Xtron, which is a well-built device. The Lava E-Tab iVORY is 10.8mm in thickness and weighs 360 grams. The device makes its weight felt when you’ve been using it for some time.

UI and Interface
The Lava E-Tab iVORY has a stock Android interface. It comes with a few preloaded apps such as Hungama, MX Player, Paytm, Opera Mini, Total Recall, and more. The UI is stock and that is a great thing as you can customize it to your liking. The only downside is that the tablet runs on Android 4.1.2 Jelly Bean.

Performance
Since the device is priced around the Rs. 10,000 mark, here is a look at the benchmark comparison between the Lava E-Tab iVORY and other tablets in the price range.

Compared to the Simmtronics Xpad Mini, iberry Auxus CoreX2 3G and the first generation Nexus, the Lava E-Tab iVORY scored the lowest. The SmartBench benchmark didn’t run on the Xpad mini, but it did on the E-Tab. Likewise, the 3DMark Benchmark didn’t run on the Lava tablet. The Xpad Mini and the Nexus 7 are Wi-Fi only tablets where as the Lava E-Tab iVORY and the iberry Auxus CoreX2 3G provide 3G along with voice calling capabilities on the go via a SIM card.

Moving on to the real world performance, the Lava E-Tab iVORY is a bit disappointing. Starting with the touchscreen, it is responsive for the most part but tends to lag during multitasking. The lag was very evident when we played Dead Trigger 2. The keyboard and UI is stock Android and responds to our touch. Typing in portrait mode was comfortable and you will be restricted to two finger typing in the landscape mode as well.

Sticking with the display, the viewing angles aren’t great. You can see a colour shift if you look at content on the tablet from different angles. The tablet recognized all the video formats we threw at it. The downside here is that navigating the timeline of this videos saw stutter, lag and at times, distortion in the picture. This happened while watching HD content.

The loudspeaker on the other hand is a different story. It is quite loud but the audio isn’t great for watching videos and other multimedia content unlike for making calls. The voice output during calls from the loudspeaker is loud and that is a good thing. The calling capabilities are better than what we have seen on the CoreX2 3G.

The tablet showcases the ability to house two SIM cards and you can also make calls from the device. We stick to our claim that it’s silly to hold a 7-inch device to your face and make calls, but we have seen people doing this in public and the fact that companies are tapping this market, means that it is a rising segment. The calling capability from the Lava E-Tab iVORY is good. The audio is clear and there was a time when I faced audio leaking, but I think the person at the other end was just screaming at me.

In terms of battery life, the Lava E-Tab iVORY lasted for close to 3 hours in our continuous video playback test, which means that it will barely last half a day of regular use. In the test, we ran a 720p MP4 movie on loop with the brightness and volume set at maximum. The Wi-Fi of the tablet was on as well.

Bottom Line
For the price point it’s hard to recommend the Lava E-Tab iVORY. As a tablet, the performance is average at best. You have tablets such as the first generation Nexus, Simmtronics Xpad mini and the Lava E-Tab XTron Plus that are better value for money products. If calling capabilities on a budget 7-inch device is something that you are looking for then you can consider this tablet. If pure tablet performance is a requirement, then you have other options to choose from.