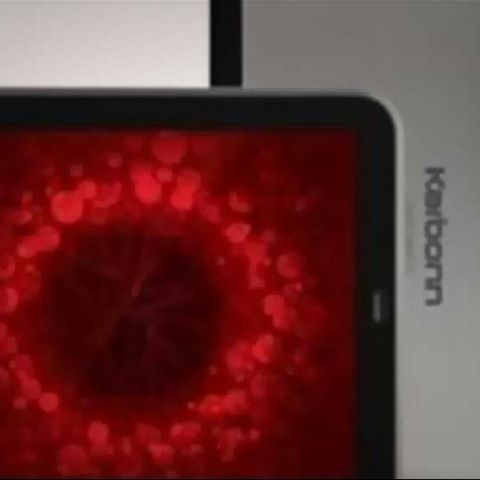 The Karbonn Smart Tab 10 does a good job of mimicking the interface of the Nexus 10 and that is where its novelty ends. Videos ran smoothly but the display's performance could have been better. The audio is average and it does have the ability to play apps from the app store. The tablet is laggy at times and we saw it crash on several occasions. If you have a budget of Rs. 10,000 we suggest you take a look at competing devices before making your purchasing decision.

We have seen quite a few 10-inch budget tablets launch in the past few months and most of them run Android 4.1 Jelly Bean. These tablets are lightly skinned and have decent multitasking abilities as well as the ability to run almost all the apps from the Google Play store. Some of the tablets that we have seen in the past include the Spice Stellar Pad, Videocon VT10, EAFT Destiny D90T, iberry Auxus Core4X 3G and more. None of these tablets however have tried to mimic the granddaddy of them all, the Nexus 10.

Today we have with us the Karbonn Smart Tab 10. The tablet has decent specifications under the hood, and has an MRP of Rs. 10,490. The startling thing about this tablet is that it mimics the Nexus 10 quite a bit. Does it take the best of inspirations or is it just another budget knock off? Read our review and find out!

The first thing that you will notice about the Karbonn Smart Tab 10 is how similar it is in its looks and appearance to the Nexus 10. This similarity is very startling when the display is on. Sure, you will know it is a budget tablet from the first instant, but the wallpaper and the interface of the tablet is very Nexus 10.

The front of the Karbonn Smart Tab 10 has the VGA camera has well. The camera rests on the left of the device (when held in landscape mode). It is easy for you to cover the camera when holding the device in landscape mode and you will do better to hold the tablet in portrait mode while video chatting.

For its connectivity, you have the microSD card slot, DC in, USB port, HDMI out, reset, headphones jack, mic, volume rocker and power button neatly laid out on the right of the tablet.

Overall, the design of the tablet is your everyday run of the mill.

The notifications menu is a drop down just like your Android smartphone giving you access to settings as well as your notifications. You have access to the standard 5 home screens. At the bottom of the display you have the standard Android back, home and multitasking buttons found on the Nexus 10, 7 and 4. Above these touch buttons you have the drawer that can house six app shortcuts/folders depending on your requirement (very Nexus 10-ish). The rest of the interface of the tablet is what you come to expect from any other Android tablet available in the market. From the lock screen you have access to unlocking the device along with going to the camera app and accessing Google now.

Speaking of Google Now, there is one thing we would like to point out. While accessing Google Now from the home screen we did see the tablet hang almost every time. This could be a bug with this particular model, but the tablet was plagued with a lot of random bugs and crashes.

Since the Karbonn Smart Tab 10 has some serious competition with homogenous products in its price range, lets take a look at how it performs in the benchmark tests.

From the above scores it is clear that the Karbonn isn’t the best performer on any level. In fact, compared to its peers in the benchmark scores it is at the bottom. Even in the continuous video playback test where we kept the Wi-Fi on, the brightness and the volume on full the tablet lasted for a little over 3 hours and that isn’t a good thing considering the battery life of competing tablets.

The touchscreen response of the Karbonn Smart Tab 10 is good, at par with other tablets in its price range. Although at the Rs. 10k price point we have the Samsung Galaxy Tab P311 that is a bit better. Navigating and typing on the Smart Tab 10 felt quite smooth. The 9.7-inch display has a resolution of 1024x768 pixel, which gets the job done, and we do wish the resolution were better. Reading text, browsing the Internet, playing games, all looked good on the display. The viewing angles aren’t the best though. At times we had to place it at a particular angle to get the colours right.

We played a variety of videos on the tablet ranging from MKV, AVI, MP4 and more. All of them ran quite smoothly on the tablet. The colours on the screen looked quite washed out and the viewing experience wasn’t the best even though the playback was smooth. We have seen better performing displays in the same price range.

The audio output of the Karbonn Smart Tab 10 s at par with the competition. Movies sounded average but the volume of the apps and games was loud and clear.

We played a lot of Angry Birds Star Wars, Temple Run 2 and Dead Trigger on the tablet. All the games ran smoothly and as always, once the action got too intense on the display, we started to face lag. Transferring files from your Mac or PC to the tablet is as simple as plug, copy and paste.

The Karbonn Smart Tab 10 does a good job of mimicking the interface of the Nexus 10 and that is where its novelty ends. Videos ran smoothly but the display's performance could have been better. The audio is average and it does have the ability to play apps from the app store. The tablet is laggy at times and we saw it crash on several occasions. If you have a budget of Rs. 10,000 we suggest you take a look at competing devices before making your purchase decision.