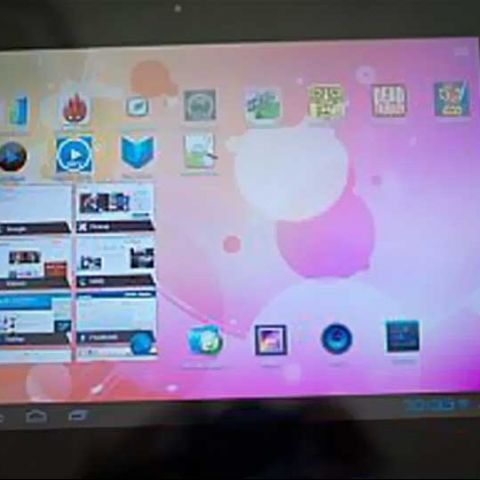 Despite the impressive hardware under the hood, the iberry Auxus CoreX4 3G tablet does have its shortcomings. If you want a decent performing tablet, you can take a look at the Spice Stellar Pad and the Videocon VT10, both of which are cheaper.

In 2013, we have seen quite a few budget tablets that have impressed us on many levels. Sure, they may still be rough around the edges and compromise on some features to maintain the price point, but tablets priced around the Rs. 15,000 mark have started becoming good prospects as your first budget tablet.

Most of these tablets come in either the 7-inch or the 10-inch form factor and boast of specifications that include a dual-core processor, 1GB of RAM and a decent display with a respectable resolution touch response.

Today, we have with us the iberry Auxus CoreX4 3G tablet. It is a 9.7-inch tablet and it boasts of Samsung’s Exynos 4412 ARM quad-core 1.6GHz processor under the hood and is priced at Rs. 15,990. Do we finally have a 10-inch tablet with solid performance and 3G at that price point? We find out.

Design and Build
The build of the CoreX4 3G tablet is what we have come to expect from budget devices. It has a plastic body and the rear has a black matte finish, which is nice. The top and bottom of the rear panel of the tablet (when held in landscape mode) has a textured finish. This may add to the grip for some in portrait mode but is more of an aesthetic design feature and has really little utility.

The front of the iberry Auxus CoreX4 3G has a simple black border surrounding the display. There are no physical buttons on the face of the device and the front houses the front facing camera along with an LED indicator that shows that the device is charging when plugged in. The left of the tablet houses the power button along with the volume rocker. The rear of the tablet hoses a camera without a flash.

All the connectivity options of the Auxus CoreX4 3G are neatly laid out on once side of the smartphone – HDMI, microUSB, DC in and headphones jack. The SIM card slot along with the microSD card slot rests under a flap between the microUSB port and the DC in. It is very easy to lose this flap, as it isn’t hinged with the tablet – it comes off completely.

The CoreX4 3G tablet weighs 610 grams and is quite comfortable to hold. Its overall design and build is your tried-and-tested run-of-the-mill 10-incher. A textured back may have added to the grip but we are just nitpicking here. Its design and build is at par with the Spice Stellar Pad and the Videocon VT10 tablet.

Features and Specifications
The iberry Auxus CoreX4 3G has a 9.7-inch IPS display with a 1024x768 pixel resolution. Under the hood, the tablet has a Samsung Exynos 4412 quad-core 1.6GHz processor, 2GB of RAM and the Mali 400MP GPU. This device supports a 3G SIM card as well.

The rear of the Auxus CoreX4 3G houses a 2MP camera and the front has a 0.3MP camera for video calls. The device runs on Android 4.0 ICS out of the box, which is a bummer, but it does have 16GB built in storage expandable up to 64GB via a MicroSD card. It also supports Bluetooth v4.0. The Auxus CoreX4 3G has a 7,200mAh battery.

The Android experience on the iberry Auxus CoreX4 3G is fairly vanilla and it doesn’t come with any noteworthy preloaded apps. Users do have access to the Google Play store to satisfy their app needs. Users also get an iberry support app which takes users to the iberry support webpage giving them access to the toll free number, e-mail support and warranty process.

Running Android 4.0.4 ICS, from the lock screen users have access either to unlock the device or to access the camera. It feels so 2012 that we wish the iberry Auxus CoreX4 3G ran on Android 4.1 Jelly Bean.

Overall the features of the tablet are relatively standard. It’s the hardware under the hood that has caught our eye and we take a closer look at that in the performance section.

Performance
The touchscreen response of the iberry Auxus CoreX4 3G tablet is quite good although at the Rs. 15k price point we have the Samsung Galaxy Tab P311 that is a bit better. It is a lot more responsive than the EAFT Destiny tablet. Navigating and typing on the tablet felt quite smooth. The 9.7-inch display has a resolution of 1024x768 pixels, which gets the job done, and we do wish the resolution were bumped up to 1280x800 pixels. Reading text, browsing the Internet, playing games, all looked good on the display. The viewing angles of the screen to are nice. Playing games and running apps on it felt nice and the display was quite crisp.

Videos on the other hand are a different story on the Auxus CoreX4 3G. Considering the power under the hood, we tried to play an .MKV 720p rip and the playback lagged and stuttered. The frame rate dropped and the experience wasn’t the best. HD MP4 and SD AVI videos however ran very smoothly on the tablet.

The audio output however isn’t the best. It is extremely soft for multimedia and has an acceptable level when it comes to apps. The iberry Auxus CoreX4 3G also boasts of the ability to make calls and access data via a 3G SIM card. The calling feature from the tablet feels like a gimmick. There is no earpiece on the tablet and the voice coming from the loudspeaker is really soft. We used it in a closed room where the ambient noise was in our control and we still had difficulty listening to the voice. The mic too is quite weak at picking up our voice. We had to either talk really loudly or keep the tablet really close to our mouth. We recommend using a headset if you plan to use the tablet to make calls.

We played a lot of Angry Birds Star Wars, Temple Run 2 and Dead Trigger on the iberry Auxus CoreX4 3G. With the power under the hood we thought the games would run extremely smoothly and our expectations were matched with Temple Run and Angry Birds. But despite the quad-core processor, Dead Trigger lagged when the action got quite intense onscreen. We have seen tablets like the Videocon VT10 that ran Dead Trigger a lot more smoothly. Transferring files from your Mac or PC to the tablet is as simple as plug, copy and paste.

Apart from testing games and playback capabilities of the CoreX4 3G tablet, we also ran benchmarks. The processor in the tablet is the same that is powering the Samsung Galaxy SIII and the Galaxy Note II.
To start with, let us see how the iberry Auxus CoreX4 3G compares to other budget tablets including the Videocon VT10, Spice Stellar Pad, Huawei MediaPad 7 Lite, EAFT Destiny D90T and the Samsung Galaxy Tab 2.

Since the same processor powers the Samsung Galaxy S III and the Note II, here a look at the benchmark scores between the two Samsung devices and the iberry Auxus CoreX4 3G tablet.

Even though the iberry Auxus CoreX4 3G tablet has the same processor as the Samsung devices, we really weren’t expected groundbreaking scores and we weren’t disappointed here. In the AnTuTu benchmark it scores better than the Galaxy S III and the Note II, but in the other benchmark scores, the Samsung devices have a clear lead.

A whopping 7200mAh battery powers the iberry Auxus Core4X 3G tablet and this is where the tablet is a performer. In the continuous video playback test, it lasted for a little over 6.5 hours and that is impressive. The location services were on, brightness was on full and so was the volume.

Bottom Line
Despite the impressive hardware under the hood the iberry Auxus CoreX4 3G tablet does have its shortcomings. If you want a decent performing tablet, you can take a look at the Spice Stellar Pad and the Videocon VT10, which are priced cheaper. For Rs. 15,000 you have the Samsung Galaxy Tab 2, which offers you better calling capabilities than the CoreX4 3G. In the 7-inch segment, you can take a look at the iberry Auxus CoreX2 3G as well. We also have the Nexus 7 officially available in India around the 15k price point. All the above-mentioned recommendations run on Jelly Bean giving them the OS advantage as well. Despite having some powerful hardware under the hood, the CoreX4 3G fails to deliver the overall punch. The touch response and the display are good for consuming multimedia content and the device has some impressive multitasking capabilities.