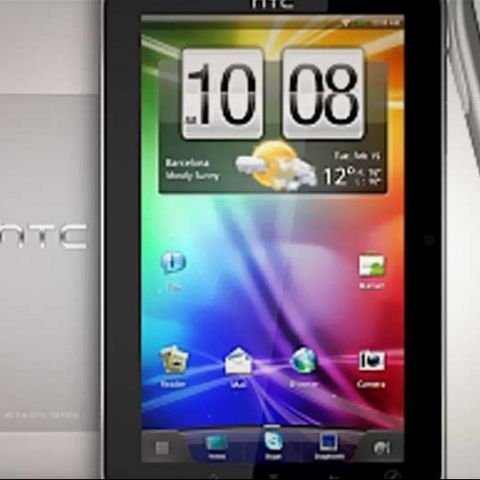 We expected the HTC Flyer would be one of the hottest Android tablets around. And that was based on the experience that HTC makes some really smart Android phones. However, this one has turned into a real shocker. No Android 3.0 (just because HTC didn't want to give up the Sense UI), a single core processor in the age of dual core ones, no HDMI out and no 1080p HD video playback capability. All these shortcomings actually get magnified simply because of the price. At Rs 40k, you are spending a lot of money for a device that isn't dual core powered, and misses out on some critical performance and feature elements. You might want to try the Motorola Xoom, or wait for the Galaxy Tab 10.1. Or just get the Apple iPad 2, if you aren't hell bent on buying an Android tablet anyway.

This has turned out to be the best example of how dreams turn sour. Of how expectation turns into frustration. Of how potential remains, but gets killed by other factors. The HTC Flyer came with a lot of expectations. However, what we are seeing in black and white is a tablet that is expensive, and that makes it feel even more incomplete than it actually is.

Look and Feel
Remember the two smartphones that turned around HTC’s fortunes, at least in India - the Legend and the Desire? The Flyer has design elements from both those smartphones. The aluminum unibody build from the Legend, and the SIM card access slot resembling elements from the back of the Desire. While this isn’t as slim as the Apple iPad 2, it does come pretty close. HTC are shipping the Flyer with a carry case as well. However, it is actually unbelievable how quickly the white case will get incredibly dirty!

The slimness of the Flyer is along with the solid build, a real eye catcher. The 7-inch screen is flanked by 4 touchscreen - home, menu, return and stylus. The display has a glossy black border on all sides. The front facing camera is placed above the screen, if you look at it in the landscape mode. The sides are slimmer than the entire thickness of the tablet, which makes the rear panel bulge a bit along the sides before it settles into a flat form. The camera on the rear panel is towards the top, and falls right in the middle of the slider that needs to be removed to access the SIM card slot. We had a tough time opening this one, and we are sure most consumers will find the mechanism hard, with the added risk of breaking the plastic part.

The top panel has the 3.5mm audio jack, and the power key. The bottom panel has the proprietary USB port, for which the logic we do not understand. The right side panel has the volume rocker, while the left panel has a completely clean look.

The HTC Flyer has its distinct ways of holding it, unlike the Apple iPad, which will orient the display in any direction you may be holding it. With the Flyer, you have a “this side up” scenario in both portrait and landscape modes.

Features
The 7-inch display is the LCD type, with a resolution of 1024x600 pixels. That helps keep the size down, and enhance usability since it fits well in the hand, in both orientations. There is 32GB built-in storage, along with a memory card slot for up to 32GB more.

[RELATED_ARTICLE]The biggest, and most unique feature on the HTC Flyer is the pen feature. Keeping with the same materials used on the tablet itself, the magic pen is also made from aluminum. It feels pretty much like a traditional pen, but relies on pressure and precision for successful utilization. Essentially, there are very few apps that can utilize the pen feature on their own. The Notes application is one that utilizes this to the fullest. You can scribble, mark or highlight text within the notes application. For any other apps, you will need to take a screenshot of the screen before the scribbling can begin. Touch the display with the pen, and press the button on the pen. This will immediately take a snapshot of the screen, with the prompt asking you to save or discard it. You may scribble now and save, or save and scribble. However, to work this successfully, the pressure you apply on the pen’s tip needs to remain constant, and uniform. Secondly, if the hand touches the screen before the tip of the pen, the on-screen keypad may show up, since the tablet may recognize that as an intent to use touch to type.

Car Panel app turns the tablet into a full-fledged GPS navigator, with a nice looking interface, thankfully! On the first screen in this app is the Destination menu, Footprints, Nearby, History, Settings and the ability to Mark a location. The destination menu lets you search for locations, or point them out on the map. The Nearby option will point out the nearest fuel stations, malls and markets, restaurants, banks, hospitals, lodgings and business districts. However, these features are completely dependent on the availability of a GPS signal. Indoors, this will usually not work.

HTC Watch is the an application that will allow you to buy or rent movies, and sync them across all your HTC devices that are capable with the Watch app. Currently, there are 8 movie trailers, and the service should be launched soon. The Reader app is, as the name suggests, an e-book reader. There are 8 preloaded books on the device. More books should be available for download soon. Both these applications are well highlighted on the home screen, with dedicated links taking you straight to that app.

Read on to know how the HTC Flyer performs, how much does it cost, and should you buy it?...

Performance
A 1.5GHz single core processor powers the Flyer, and that is a surprise. And not a good one at that! The Flyer, thanks to its limited processor capabilities, cannot play back 1080p HD videos. The lack of an HDMI out port is possibly because of this. While the tablet isn’t slow per se, but could have done with the extra grunt offered by a dual core processor. After all, HTC had the dual core 1.2GHz processor available to them, the one they used in the Sensation smartphone. Can someone please tell us the logic? Maybe HTC thought that 1.5 is better than 1.2! Is it really?

The 7-inch display is very good. This is salvation, sort of, after the disappointments around. Colours are quite vivid, but don’t pop out uncomfortably. The black levels seen on this display are much better than what we saw on the Sensation smartphone. Sharpness is quite decent, but there is a distinct lack of it when watching videos (even the ones on HTC Watch). Legibility on sunlight is pretty okay, as long as the brightness is set to auto mode, or is set at 50% or above.

The 5MP camera is not at all as good as we had hoped it would be. The amount of noise in every picture basically spoils the fun. And this when we are taking images in pretty good light. Dark environment images are even worse. Videos are jerky, and while they do have the colour depth, they do lack the fluidity and sharpness, to be called good.

[RELATED_ARTICLE]Android 2.3- that is another issue we fail to understand the logic behind. When Google has the ‘optimized for tablets’ Android 3.0 OS available, HTC still decided to roll out the Flyer with Android 2.3, simply because they didn’t want us to not be without the Sense UI. Since Google doesn’t allow skin wrapping over the Android 3.0 OS, HTC decided that 2.3 was good enough for the buyers of this expensive tablet. Not quite, though. The HTC Sense, everything said and done, is excellent visually. The version, names 2.1 for tablets, is pretty similar to HTC Sense 3.0 that we saw on the HTC Sensation. While the Sense is good, it isn’t good enough that you’ll forget the missing elements of Android 3.0. First off, you wont get the tablet display optimized versions of many apps. For example, you will not get the tablet version of the Gmail app, which offers a much more interactive interface thanks to the space available. Secondly, you will be stuck with smartphone apps, on this big screen device. Some will not render properly, inevitably, causing more heartburn. We can only hope that HTC decides to be a little less possessive about the Sense UI, and upgrades this to Android 3.0 in the near future.

You thought the presence of a SIM-card slot means this can double up as a phone as well? You are wrong! While the SIM-card slot is very much there, it is meant only for data- GPRS, EDGE and 3G. That seems to be pretty much in line with what the newer generation of tablets offer. Install a VoIP app like Skype to get the voice call feature.

Battery life on this device is quite good. This will last about a day and a half, from full charge to complete discharge. This included continuous connectivity to the Wi-Fi networks, and an assorted usage consisting of web browsing, watching videos, social networking and some music.

Our Take
There is no other way of putting this- we are very disappointed. After all the hype, and the expectations (placed on it, quite rightfully), the HTC Flyer has turned out to be a disappointment. No dual core processor, stuck on Android 2.3, no HDMI out and cannot play back 1080p videos. As we have specified before, these shortcomings get magnified because of the price tag touching almost Rs 40k. You might want to wait for the Motorola Xoom or the Samsung Galaxy Tab 10.1 if you are hell bent on buying an Android tablet. Else, please feel free to check out the Apple iPad 2 - it is possibly the slickest performer out there, at the moment.