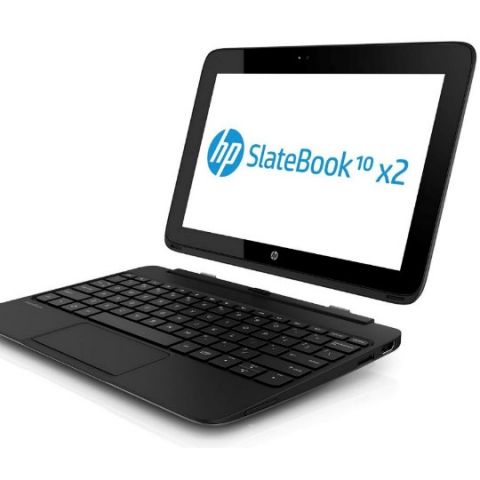 For Rs. 39,990 you have a lot of high-end tablets at your disposal. Sure, the highlight of the HP Slatebook X2 is the Tegra 4 chipset powering it and it is a beast especially if you are one who would like to play games on the device. We'd recommend you stick to the tried and tested iPad 4th gen, Samsung Galaxy Note 800 and more available in the market if you want a good overall performing tablet.

A tablet is a multifunction utility device where users can use it for productivity, viewing movies and playing the occasional games. In the past we have seen a host of tablets such as the Nexus 10, Samsung Galaxy Tab 10.1, Galaxy Note 800, Asus Eee Pad Transformer Prime showcase some impressive power under the hood along with some stellar performance.

Some of these tablets come with docking stations such as the Asus PadFone and the Asus Transformer Pad TF300TG, which gives them the utility of a netbook. One more addition to this category of hybrid tablets is the HP Slatebook X2. The review unit we received has “not met all regulatory approvals and therefore can’t be offered for sale or lease”. Put simply, the unit we received is a prototype. The most interesting thing about the device is that it is powered by the Tegra 4 chipset, one that we have eagerly been waiting to see in action. The only device that has officially showcased the power of the chipset is the NVIDIA Shield.

Even though this is a prototype, let's put the HP Slatebook X2 through its paces and see how the device performs.

At a Glance
The first thing that you will notice is that the device is very reminiscent of a netbook since it comes with a keyboard docking station. The keyboard has a battery pack that can charge and power the tablet when docked in. This means that you can dock the tablet in the keyboard to charge the battery of the tablet on the go. The tablet runs on Android 4.2 giving you access to a bunch of features such as the lock screen widget and more.

Another thing that you will notice is that the tablet has a proprietary charger, which is very reminiscent of the old iPad 30-pin dock connector. In India, the HP Slatebook X2 will take on the likes of the Asus Transformer Pad TF300TG, Asus PadFone, Samsung Galaxy Note 800 and iPad (4th generation) to name a few. You can see a detailed comparison of the specifications of these devices here.

Design
Docked in, you would be forgiven for thinking that the HP Slatebook X2 is a notebook. The face of the tablet has the 10.1-inch display without any physical buttons. The front only has the front-facing camera and the HP logo, that’s it. The bottom of the tablet when held in landscape mode has the proprietary connection port that also doubles up as the connector for the docking station. On the right of the connector we have the headphones jack and on the left we have the microSD card slot.

Just below the HP logo, at the bottom of the face of the tablet. There is a small panel that houses the two speakers on the tablet. The rear of the tablet has a white finish with the HP logo. The rear is very easily susceptible to scratches. Apart from the camera (without a flash), the rest of the HP Slatebook X2 also houses the volume rocker and the power button. These buttons don’t stick out like they normally do on other devices and are seamlessly integrated into the rear of the device.

Coming to the dock of the tablet, it has a netbook like feel to it. The keyboard is chiclet in style and the keys are a bit small and take some getting used to. The keyboard dock also houses a trackpad. The left of the dock has a full sized USB port along with a headphones jack and the right has an HDMI-out, charging port and an SD card slot. The weight of the table is 1.4kgs and that’s heavy for a 10-inch tablet.

Overall the HP Slatebook X2 is a well-built tablet but it is heavy when compared to other tablets available in the market.

UI and Interface
The UI of the HP Slatebook X2 is stock Android 4.2 Jelly Bean and there is no skin or UI overlaying it. HP has however preloaded the device with a few apps such as HP EPrint, HP files Manager and HP media player. Since the tablet runs on Android 4.2 Jelly Bean you have access to lock screen apps as well as all the other Jelly Bean goodies. At the bottom of the display you have access to the standard Android back, home and multitasking menus.

Once docked and plugged in to charge, the display of the tablet gives you the battery level of the tablet as well as the keyboard dock separately so you know which device has how much juice. Swiping down from the top left corner of the display gives you access to the notifications and swiping down from the right gives you access to functions such as setting, brightness, Wi-Fi, and more.

Performance: Nvidia Tegra 4 flexing it's muscles...
Our first Tegra 4 device, we have high expectations for the HP Slatebook x2. Priced around the Rs. 40,000 mark and we hoped the device would perform like a beast and we are happy to say that it did. Put simply, it’s the fastet tabet we have tested in respect to the benchmark scores. Just to put things into perspective, we have added the scores of the Xperia Z Ultra that runs on the Snapdragon 800 chipset with a Quad-core 2.2 GHz Krait 400 CPU along with 2GB of RAM. Here is a quick look at the benchmark comparison between the HP Slatebook X2 and other high-end tablets with the Xperia Z Ultra thrown into the mix for reference.

Coming to the touchscreen response of the tablet it is good, smooth and responsive. The onscreen keyboard is comfortable to type on.

The 10.1-inch display has a resolution of 1920x1200 giving it a 224ppi pixel density making it quite crisp. The only downside to the display is that even on full brightness, it looks a dim. The viewing angles are great but we wish the display were more vibrant. The tablet ran HD MP4 files smoothly but for the MKV files, we had to download a third party player from the Play store. The audio output from the speakers on the tablet is quite disappointing. The output is soft and you’d do better to use a pair of headphones.

Now, since the tablet is a prototype, we don’t think its been registered with the Google Play store in India. We tried to download a bunch of apps such as Shadow Gun, Dead Space, Real Racing and more but a message appeared on the Play store saying that the tablet isn’t compatible with the apps. We side loaded Dead Space on the tablet and the game ran very smoothly. The load times were ok and the performance of the game was quite smooth. The tablet will perform like any other in terms of every day use but it is with regards to gaming where the tablet will really shine thanks to the Tegra 4 chipset.

In terms of other use such as the browsing the Internet, reading a book and more, the device performed averagely. The power under the hood is sufficient to take care of the smooth performance; it’s just that the display is lacklustre in terms of vibrancy.

Keyboard Dock Performance
Typing on the keyboard dock takes a bit of getting used to especially if you are used to the full sized keyboard found on laptops. Once you get used to it however, it is comfortable to use. The dock is very well built and feels extremely sturdy. The dock also has a trackpad and it works well, but Android isn’t designed for use with a trackpad and we found ourselves using the touchscreen more. The keyboard dock is as sturdy as the Asus Transformer Prime.

Bottom Line
For Rs. 39,990 you have a lot of high-end tablets at your disposal. Sure, the highlight of the HP Slatebook X2 is the Tegra 4 chipset powering it and it is a beast especially if you are one who would like to play games on the device. But then again, how many apps are there (apart from games) that exploit the hardware to its fullest potential? There are games that will run super smooth courtesy the hardware but we didn’t have access to them natively from the Play store. We’d recommend you stick to the tried and tested iPad 4th gen, Samsung Galaxy Note 800 and more available in the market if you want a good overall performing tablet. If you are one who wants the latest hardware and will be gaming a lot on the tablet, then you can consider the HP Slatebook X2 just for the Tegra 4 chipset