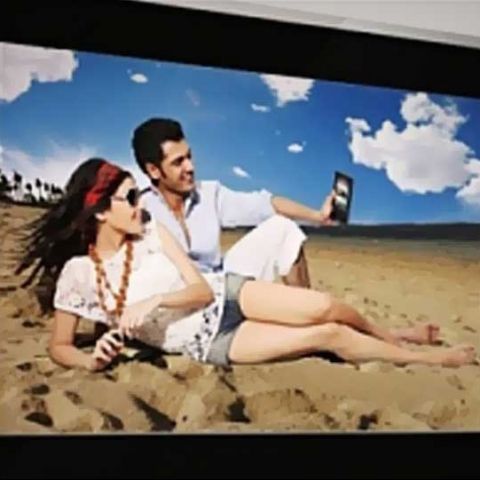 Overall, the HCL ME Tablet X1 is an average performer when compared to the competition in the same price range. The lack of the Google Play store is the biggest downer of this device. The lack of Bluetooth and a SIM card slot too is missed, as these are some of the features offered by the competition such as the Reliance 3G tab and the Beetle Magiq. The 1080p MP4 playback was smooth and games like Angry Birds Rio ran smoothly on the device. If you are in the market to pick up a tablet in the Rs. 10,000 you can consider this device keeping the above points in mind.

The Rs. 10,000 price point has seen the rise of quite a few tablets in the past year from brands such as iBall, Mercury, Beetle, Viewsonic and Reliance to name a few. In trying to break the price barrier, some of these devices compromise on features such as build, battery life, camera and the power under the hood. Their overall performance however gets the job done for basic activities such as web browsing, mail, videos and the occasional game from the Google Play Store.

Today we have amongst us the HCL Me Tablet X1. This is HCL’s second foray into the budget tablet segment. Does the device have what it takes to stand out of the crowd?

Look and Feel
On first impressions, the device is quite well built. It has a grey plastic body where the rear panel isn’t removable giving it the feel of a unibody design (even though the design isn’t unibody).

The front of the device houses the 7-inch display that boasts of a resolution of 480x800. The front also has the 2MP camera and a back button. There is no rear-facing camera. In terms of connectivity, all the ports are at the bottom of the device. The device has a mini USB port, mini HDMI out, a headphones jack, microSD card slot, DC in and the power button. That may seem like a lot of ports but they are neatly laid out.

On the top of the device (when held in landscape mode) is a rocker that works as a menu and home button but also doubles up as a volume rocker.
The Me Tablet X1 isn’t very heavy either weighing in at 391.5gms.

Overall the device fits the run of the mill crowd. Its looks and style isn’t that different from the competition to make it an outstanding product. It does however feel very well built on ones hands. In our hands the device feels similar to the Reliance 3G tab.

Features and Performance
Straight out of the box, the device runs on Android 2.3 Gingerbread. The down side is that HCL has removed access to the Google Play Store on the device. Instead you have access to the HCL Me app store which housesthe apps.

Sure, most of the popular apps are there but you don’t have access to all the apps. Plus, the interface on the HCL Me app store is boring and dull and it asks you three times before downloading and installing an app. It’s pretty frustrating to use this store and we wish HCL adds the Google Play store in addition to its own store.

With the biggest disappointment out of the way, let us take a look at how the rest of the device performs.

Under the hood, the device is powered by a 1GHz Cortex A8 CPU and has 512MB RAM keeping it at par with the competition if not better. The touch screen is capacitive in nature, which means that you don’t need to use a stylus. Hurra!!

The overall response of the touchscreen is a bit sluggish. This performance improved marginally when we installed a task killer but the difference wasn’t a deal breaker. We played a bit of Angry Birds Rio on the device and the games ran pretty smoothly.

Browsing the web on the device was a mixed experience. The change in orientation from portrait to landscape was swift but the pages took a little too long to render. Once loaded it was easy to zoom into the text to read it and the text wrapped quite well. The overall web browsing experience was good.

Another downer to the device is that the YouTube app available on the HCL app store is underwhelming and we had to resort to the mobile version of the video-sharing site to watch the videos. The videos ran pretty smoothly but the audio from the inbuilt speakers is very soft.

The HCL Me Tablet X1 boasts of 1080p video playback support at 30fps. We ran two 1080p trailers in .MP4 format on the device and they ran absolutely smoothly without any hiccups. The display was crisp but was susceptible to a lot of glare. The viewing angles on the device too are underwhelming.

The front of the device has a 2MP camera that takes pictures in a maximum resolution of 1600â€†×â€†1200. The images from the camera aren’t exceptional and very average. The front facing camera is also capable of shooting videos in 640â€†×â€†480 resolution.

The device also comes with a mini USB to full USB adaptor. This is really handy as the device boast of compatibility to 3G dongles. With average use, the device lasted us under a day, which is expected from a device in this category.
A good feature of the device is that it has a file manager that comes preinstalled. This file manager is really easy to use and you can seamlessly locate files you have transferred from your computer onto the device. The HCL Me Tablet X1 also has an APK Installer that will help users install and uninstall apps with ease.

Verdict
Overall, the HTC Me Tab X1 is an average performer when compared to the competition in the same price range. The lack of the Google Play store is the biggest downer of this device. The lack of Bluetooth and a SIM card slot too is missed, as these are some of the features offered by the competition such as the Reliance 3G tab and the Beetle Magiq. The 1080p MP4 playback was smooth and games like Angry Birds Rio ran smoothly on the device. If you are in the market to pick up a tablet in the Rs. 10,000 you can consider this device keeping the above points in mind.