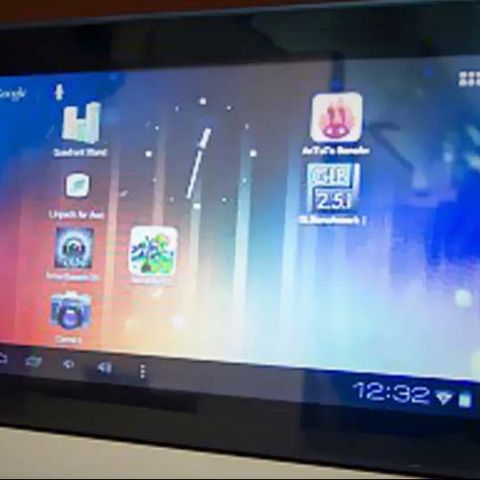 The Fujezone Smart Tab MT12 is a run-of-the-mill budget tablet and brings nothing new to the table. If an average performer is your requirement then you can consider this device. If processing power under the hood is a priority, then the WickedLeak Wammy Desire is a better option.

Today, the market is flooded with quite a few offerings in the budget tablet space, especially if your budget is under Rs. 10,000.

Most of the tablets in this category are quite homogenous in nature and boast of very similar specifications.

Today we have with us the Fujezone Smart Tab MT12, and we've put it through its paces, to see if it brings anything new to the table, or is worth your hard-earned money.

Design & Build
At first glance, the Fujezone Smart Tab MT12 is quite generic in its appearance. It looks like any other budget tablet available in the market, the front of the device has the front facing camera and that's it. No physical buttons. The rear of the device has a white glossy finish making it a fingerprint magnet.

In terms of connectivity all the ports are neatly laid on one side. When held in landscape mode, the right of the Fujezone Smart Tab MT12 has the power switch, headphones jack, microUSB port, DC in, volume rocker and microSD card slot.

Overall, the design of the Fujezone Smart Tab MT12 is good but there are better looking tablets available in the same price range like the Wammy Desire. The device isn’t heavy and it is comfortable to hold.

Features & Specifications
The specifications under the hood too are what we have come to expect from a budget tablet. It has a 1.2GHz processor, 512MB of RAM, 3000mAh battery, front facing camera, 4GB built-in storage expandable up to 32GB via a microSD card and a 5 point touchscreen. There is no information on whether the tablet will be upgradable to Android 4.1 Jelly Bean and runs on Android 4.0.4 ICS straight out of the box.

The Fujezone Smart Tab MT12’s interface is stock android and the tablet does come with a few preloaded apps such as Indian Railway, snooker, Kingsoft Office, Yahoo Messenger, Racing Moto, YuppTV and more. The list of preloaded apps isn’t anything exceptional and you can download the apps from the Play store at anytime.

Performance
Let’s start with the raw performance of the Fujezone Smart Tab MT12. Its start-up is pretty slow clocking 52 seconds and the journey with the device doesn't get any better once the device is on. Straight out of the box, the device is plagued with lag and the touchscreen takes it own sweet time to respond. There is a custom keyboard, which you will want to disable, as it is very inconvenient to use. The alphabets are split and there is a number pad in between. It is quite cumbersome to use.

The display of the Fujezone Smart Tab MT12 is plagued with the same flaws of its budget brethren – very reflective and susceptible to a lot of glare. The display however has better viewing angles than some of the competing tablets. The touchscreen is capacitive in nature but the response to touch is a mixed bag. Sometimes it responded to a feather touch, at others it refused to acknowledge the finger. There is a distinct lag when typing on the keyboard too. You have reached the fourth or the fifth letter and the typed letters still haven’t appeared on screen.

All is not bad with the Fujezone Smart Tab MT12 though. It managed to run the apps from the app store that we threw at it. It also managed to play all the video formats quite well without any hiccups. The onboard speaker however is a disaster and you’d do better to watch movies with headphones on.

In the Fujezone Smart Tab MT12's benchmark scores too, the device was beaten by the Wammy Desire, which is priced at Rs. 6,800 and has better power under the hood, as well as the Byond mi-book Mi5. You can take a look at the scores below.

A 3000mAh battery powers the Fujezone Smart Tab MT12 and this is where the tablet is a quite alright. In the continuous video playback test, it lasted for about 4 hours, which is quite good, better than the Wammy Desire.

Bottom Line
The Fujezone Smart Tab MT12 is your run of the mill budget tablet and brings nothing new to the table. If an average performer is your requirement then you can consider this device. If the power under the hood is a priority, then the WickedLeak Wammy Desire is a better option.