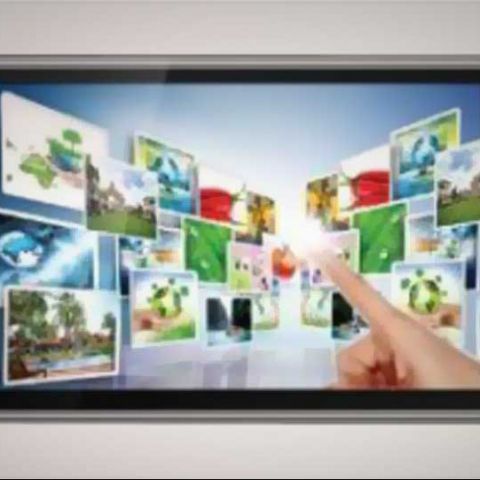 With the Magiq Glide, Beetel have a tablet that will take on the likes of the Reliance 3G Tab and ViewSonicViewPad 7e. Performance seems on par with the predecessor, but the upgrade to a capacitive touchscreen is the best thing that could have happened. However, you are paying extra for something that shouldï¿½ve been there in the first place.

Now this is one update that we are sure most people wont mind paying extra money for. When we had reviewed the Beetel Magiq tablet sometime back, the resistive touchscreen had been the really annoying factor. However, that has changed, for the better. The capacitive touchscreen glides in!

Look & Feel
Undeniable, but true - The Glide looks exactly like its predecessor. The outer shell has been retained as it is, for what is for all means and purposes a new product. However, the freshness is limited. In the scenario where it is competing against the likes of the Reliance 3G Tab and the ViewSonicViewPad 7e, the Glide comes across as a bulky tablet. There is no doubting the fact that it is solidly built, and feels a lot better to use than those unbelievably plasticky tablets circulating the market, particularly the unbranded ones. The use of metal, particularly gives it a solid feel. The integrated kickstand is a unique feature we have not seen on any tablets, unless you buy the separate after market accessories for that.

Features & Performance
A 1GHz single core processor, coupled with 512MB of RAM, powers the Glide. The OS version - Android 2.2 remains unchanged. We expected to see at least Android 2.3 that the Reliance 3G Tab and the ViewPad 7e come with. However, the performance of the Glide seems to be slightly better than the Magiq. Apps seem to open slightly quicker, and the menu is a tad smoother to flick as well. Maybe there have been some tweaks to the OS bit as well, in terms of optimization.

The UI carries forward the same brilliance as the previous tablet. The desktop-ish idea works very well. You have multiple home screens - home, web, entertainment, communications and favorites. This allows for better sorting of widgets and app shortcuts, without having to go into the main app list.

The 7-inch touchscreen retains the same 480 x 800 pixel resolution as before, but the single biggest change is that now the touchscreen is the capacitive type. We had criticized the Magiq for having a resistive touchscreen that spoiled the entire tablet experience. Am happy to report that the capacitive touchscreen responds well. Flicking gestures are smooth and have a sureity of response. The biggest contrast is on the lock screen. Slide up to unlock on the resistive screen of the Magiq, and you will surely need to have another go, and possibly another, before the display unlocks. With the Glide however, things are as they should be - smooth and responsive. We had appreciated the video playback quality of the Magiq’s display, and we have to say that this one seems slightly better than that. You will definitely need a third party app to view most video formats, but the playback is smooth even for 720p HD videos, as long as you don’t skip huge parts of it at one time.

While the display specs remain the same otherwise, the Glide’s display seems to be a lot crisper. Text reads better, and images don’t seem bereft of sharpness.

The Glide comes with 8GB internal storage, and a microSD slot for 16GB more.

The disappointing 2MP cameras are carried forward from the earlier tablet version. The rear camera will take okay pictures, but not something that will look good when blown up even one bit. The video call camera is heavily dependent on good lighting conditions.

Battery life is isn't as good as the likes of the Reliance 3G Tab. A bit of video viewing, web browsing and half an hour of music in the background meant the Beetel MAGIQ ran out of battery in about 4 hours. This was when the brightness was turned down to about 20%.

Our Take
You are essentially paying extra for the capacitive touchscreen, something that the Magiq should have had in the first place. While the Reliance 3G Tab does offer a sleeker package, it does surprisingly badly in our benchmark tests. We say surprising because when you are using the tablet normally, it feels faster than the Magiq Glide. If we were to buy one of these three - the Beetel Magiq Glide, the Reliance 3G Tab and the ViewSonicViewPad 7e, we would ideally decide between the Glide and the Reliance 3G Tab (read out review of it here).

To make it easier for you, we have the table below comparing the Magiq Glide to the predecessor (Magiq), the Reliance 3G Tab and the ViewPad 7e.