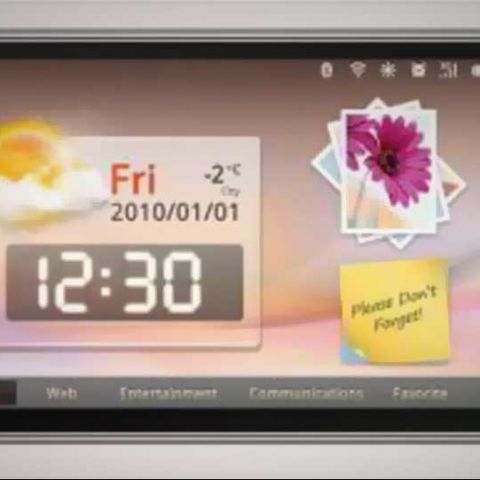 To sport a price tag of Rs. 9,999, the Beetel MAGIQ does make some compromises - a resistive touchscreen, Android 2.2, and a very heavy form factor. The kickstand feature is a nice little add-in. And performance isn't an issue with the 1GHz processor. We quite like the UI skin wrapped over Android. If you are on a strict budget, and/or donï¿½t really mind the resistive touchscreen, this may be the tablet worth checking out. However, if you donï¿½t mind spending Rs. 13,000 or a network locked tablet, then the Reliance 3G Tab may be worth a consideration too.

The battle for the budget tablets is really on now. It is interesting to note that while none of the traditional big names are stepping into this category, surprise names like Reliance and Beetel have made an honest attempt at making the tablet a mass-market product. From what we saw of the Reliance 3G Tab, we were really impressed. Beetel’s MAGIQ is priced even lower than the 3G Tab. Is it any good? Let us find out.

Look & Feel
Straight out of the box, and you know the Beetel MAGIQ is designed for solidity. We quite like the build it offers, and despite being a budget tablet, doesn’t have any rough edges. However, the weight is a bit of an issue, and it will be a bit annoying if being used for a long duration. There is an integrated kickstand on the back panel, which we expect will be used quite a bit if you watch videos on the device.

Back to the front of the tablet, and on either side of the display is a bunch of keys. The left side has the home, menu and return keys. The right side has the call connect, call disconnect and the optical trackpad. It would have been lovely had these been touch sensitive, but they are actual keys that word in the traditional press to click method!

The top panel has the power button on one side, and the 3.5mm jack on the other. The charging port is on the right side panel. The left panel has the volume rocker. You will find the memory card slots on the bottom panel, below the display.

Overall, while we like the solid build quality, it is a tad disappointing to find out that this device is just too heavy to be a comfortable 7-inch tablet.

Features
The Beetel MAGIQ has a 7-inch resistive touchscreen, and comes preloaded with Android 2.2.2. There is a neat UI skin wrapped around the OS, and we kind of the like the multiple desktop thing that it is trying to create here. Allows us to place the widgets neatly in the well-categorized ‘desktops’.

The Beetel MAGIQ is powered by a 1GHz processor and paired with 512MB of RAM. Ordinarily, we would have slightly criticized this combo had this been a smartphone costing Rs 20,000 or more. But since this is a budget tablet, at a very interesting price point, we are more than impressed.

The goodness doesn’t stop there. The tablet comes with 8GB of built-in storage, and you can expand the memory using a microSD card, up to 16GB.

Back to the interface, and there are quite a few interesting tweaks here. First off, the traditional Android notification bar has been removed, and what remain are just the icons (see above image). For battery status, wireless control, network signal, Bluetooth and even brightness management. Just reduces the number of steps you need to take to change the brightness levels.

Performance
The fact that this one is powered by a 1GHz processor means it isn't going to slow down even with multiple background apps running. 512MB of RAM is going to be a bit of a limiting factor, but every time we want to criticize it, we just look at the price tag, smile, and feel happy about what God (or in this case, Beetel) has given us!

[RELATED_ARTICLE]The 7-inch resistive touchscreen is a definite sore point. We admit that we are used to capacitive touchscreens, but resistive displays are just a backward step for the product as a whole. The usual unresponsiveness we see from this kind of a display persists. Display quality is pretty good though. The resolution of 800x480 pixels is on the low side, admittedly, but then again, it does lend a crude bit of crispness to the display. Watching videos on it is a surprisingly smooth experience, and even 720p HD videos. However, you will need to download a third party media player from Andoid Market, because the native one is unable to play back some formats.

The 2MP camera on the rear, as well as the video chat one, isn’t very good. Extremely grainy images at best, even with good lighting around. Videos are very jerky as well.

Battery life is not as good as we hoped it would be. A bit of video viewing, lot of web browsing and some music in the background meant the Beetel MAGIQ ran out of battery in about 4 hours. This was when the brightness was turned down to 20%.

Our Take
For a price of less than Rs. 10,000, the Beetel MAGIQ is indeed fit to be a first tablet for most people who are buying on a budget. The resistive touchscreen isn't the best idea, but we are sure most people wouldn’t mind, keeping the price in mind. Performance is very good, and we did not experience any slowdown even with multiple apps running. However, if you don’t mind spending Rs 13,000, then the Reliance 3G Tab may be worth a consideration too. Be aware though, it is locked to the Reliance network.