Asus ZenPad 7.0 (Z370CG) Review: Not what we’d expect from the makers of a Nexus Tablet 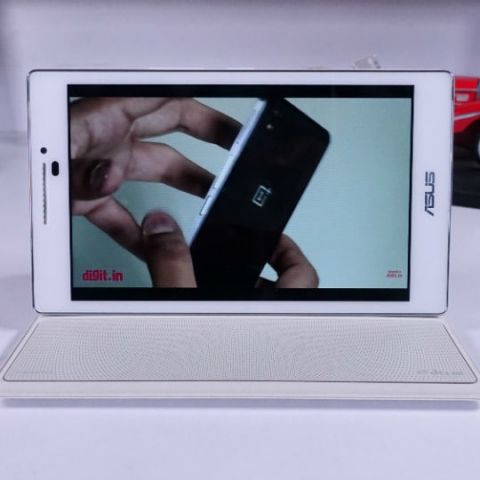 If you are looking for a tablet around 12K and performance is at the top of your list then you may want to look elsewhere as the Asus Zenpad isn’t a powerhouse with heavy use. What the tablet offers is average performance and the ability to make calls.

Tablets, the category that was defined with the launch of the first iPad, saw a big dip in sales in the past year, and in 2015, we have failed to see the launch of dedicated tablets. Sure we have the iPad mini 4, which is great, and a few more tablets launched here and there but the big bulk is dominated by laptop-tablet hybrids from the likes of Lenovo, Dell, Asus and more. We have seen the launch of the Samsung Galaxy View but that’s a story for another day. Today we have with us the Asus ZenPad 7. There is just one reason to be excited about this device – Asus made the two 7-inch Nexus devices. For the uninitiated, the two Nexus 7 tablets launched by Asus were great performers, be it raw horsepower, the fluidity of Android or great entertainment value.

Today however, the 7-inch tablet market has seen a dip thanks to really large screen smartphones that boast of a screen size close to 6-inches. Does it make sense to pick up a 7-inch tablet with the ability to make calls? The device also comes with an audio case that boasts of DTS HD audio. Is it worth the investment?

Kicking things off with the build and design of the Asus Zenpad 7.0, its standard what we’d expect from a 7-inch budget tablet – thick borders surrounding the display. There are no physical navigation buttons on the face of the device. Above the display we have the front facing camera, ambient light sensor and the earpiece, yes the earpiece. The device has the ability to make calls. The right houses the volume rocker and the power button, the bottom has the microUSB port, the top the headphones jack – again a standard we’d expect. The rear of the device has a plastic back that can be ripped out with ease. Rip out the back cover and you will see the SIM card slot and the MicroSD card slot for expandable storage. There is one more connector here and that is for the audio cover. For the purpose of this review, we have used the device with the audio cover.

Once the audio cover is added to the Asus ZenPad 7, it becomes quite bulky and a little uncomfortable to use. Sure you now have a stand to keep the device in landscape mode but apart from that there is little ergonomic value here. 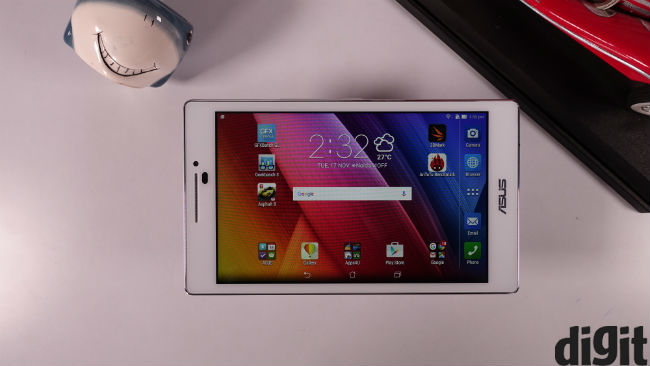 Sticking with the Audio cover, there is only one position in which you can prop the tablet so if you are sitting outdoors and there is direct glare on the device, you will have to change your position rather than that of the tablet.

Without the audio cover, the Asus ZenPad 7 has a build homogenous to other tablets in its price bracket with some semblance of the Nexus 7 thrown into the mix. It is comfortable to type in portrait mode thanks to all the practice we’ve had from large screen phones. In landscape mode the keys feel kind of cramped. If you want a landscape keyboard on a tablet done well, it has to be like the iPad mini.

Overall the build of the device is standard what we’d expect from a sub 15K tablet – plastic and simple. 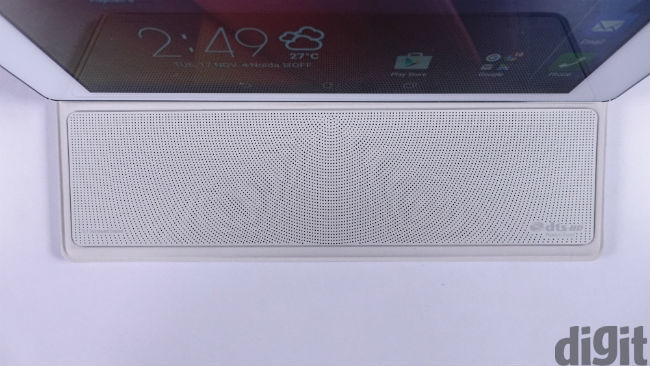 Tablets have established themselves as more of content consumption devices rather than content creation devices. And where do we consume all this glorious data? On the display of course! So, kicking things off with the display, the Asus ZenPad has a 7-inch display with a 1280x800 pixel resolution, which isn’t bad. The viewing angles of the display are good and the resolution is crisp enough to get through everyday tasks like email, and watching a few videos. When it comes to gaming however, the display looks washed out and pixelated in the case of Asphalt 8.

Coming to the UI. The tablet runs on Android 5.1 Lollipop straight out of the box skinned with Asus’ own UI. An interesting feature of the UI is that it auto arranges the apps you download into folders if you wish it to do so. For the most obvious choices it does this well grouping productivity apps together, tools together, communication apps together, so on and so forth. This system isn’t perfect especially if you are finicky about putting apps in particular folders but for the most part, it helps get rid of the clutter, which is nice.

Apart from the notifications on the lock screen you also have quick access to the dialler, camera and messaging app by default. The UI doesn’t have childish icons and isn’t loaded with a lot of bloatware. There are a few preloaded apps like MiniMovie that lets you make a movie with your picture gallery.

For the price you pay, the display of the Asus ZenPad has good viewing angles. The resolution is ok if you are reading text and doing absolute basic work. For graphically intensive work, this may be a problem and we will talk more on that in the performance section. 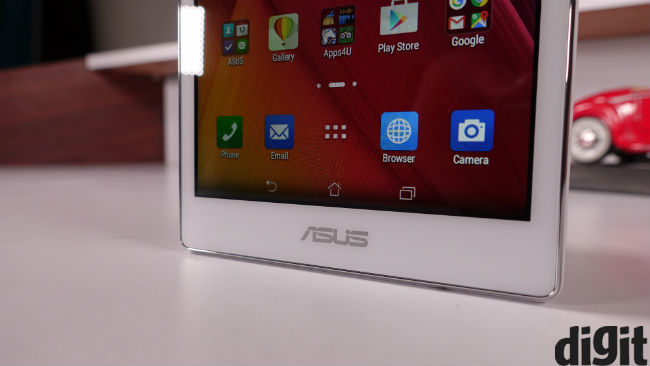 Lets kick things off with a quick look at the specifications of the Asus ZenPad. As we’ve mentioned earlier, the device has a 7-inch IPS display with a 1280x800 pixel resolution giving it a pixel density of 216ppi. It has the Intel Atom x3-C3230 quad-core chipset coupled with 2GB LPDDR3 RAM. The device has 16GB built-in storage expandable via a microSD card. A 3450mAh battery powers the entire package.

Getting the worst out of the way, the device isn’t great when it comes to gaming. A game like Asphalt 8 lagged, stuttered and was unplayable. Another con of the device is the speaker cover it comes with. Sure, it’s loud, but it’s screechy. The audio lacks detail, and sounds a lot like an average laptop running VLC at 200% volume. 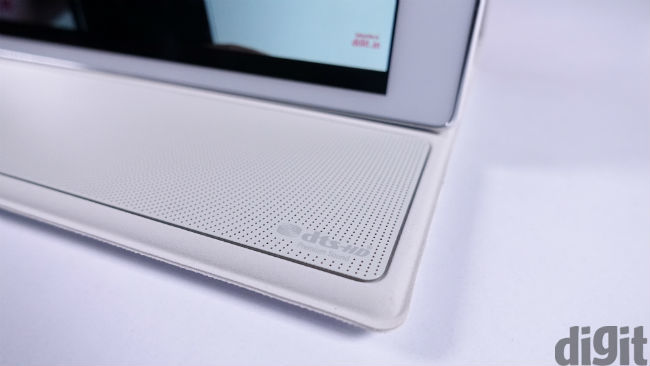 Coming to the battery life, the device ran for about 6.5 hours in our continuous video playback test, which is standard. The call quality from the earpiece was good but would you really want a 7-inch behemoth on your face while making a call?

Overall, speaking purely from a tablet experience, the device misses the mark especially when you compare it to the likes of the Xiaomi Mi Pad available at a similar price point.

If you want a tablet for about 12K and don’t mind losing out on the ability to make calls, then there are better options like the Xiaomi Mi Pad available in the market. The Mi Pad has a larger display with a better resolution and better hardware powering it. The Asus ZenPad 7.0 has underwhelming performance when it comes to gaming but if you are on a budget looking for a voice-calling tablet, for absolute basic work, you can give it a look. 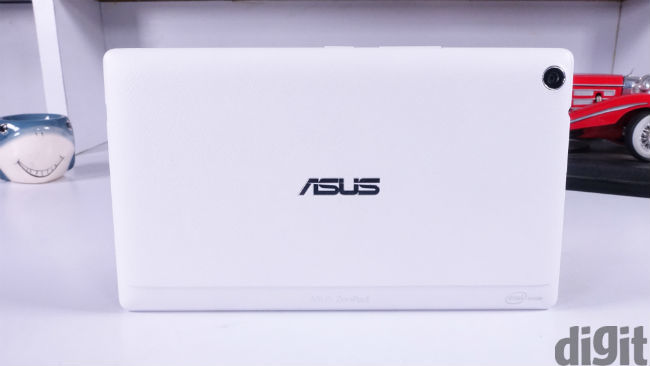