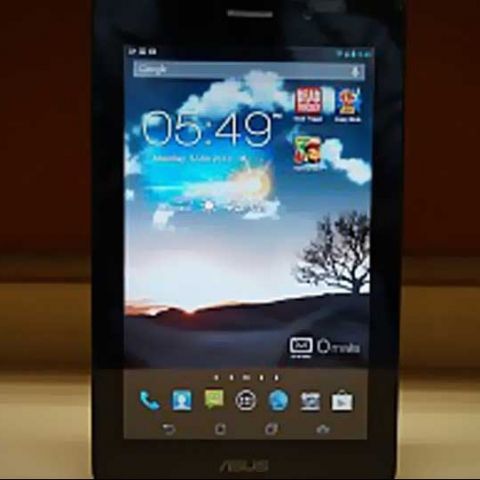 The Asus Fonepad is a direct competitor to the Samsung Galaxy Tab 2 (and also the upcoming Tab 3). The tablet has some pretty interesting features such as Floating Apps, has the ability to playback video smoothly, make calls and a great build. On the downside, it is plagued with a bit of lag and the rear camera is poor. At 8GB, the built-in storage isn't great either. If you are looking for a tablet around the 15k price point, you can definitely consider this device along with the Galaxy Tab 2. If you are on a tighter budget (10K) you can take a look at the iberry Auxus CoreX2 3G tablet as well.

We have seen the launch of quite a few 7-inch tablets in the Indian market with the ability to make calls. These devices range from the absolute budget offering to premium including the iberry Auxus CoreX2 3G tablet, Samsung Galaxy Tab 2, Huawei MediaPad 7 Lite and many more.

Today, we have with us the Asus Fonepad that boasts of a 7-inch form factor and also shows off the ability to make calls. One unique feature of the tablet is that it runs on the Intel Atom Z2420 CPU instead of Qualcomm or Nvidia and more that we have come to expect from tablets today.

Priced at Rs. 15,999 does the Fonepad bring anything new to the 7-inch tablet family or are you better off sticking to the tried and tested?

At a Glance
The first thing that you will notice about the Fonepad is that it looks like your run of the mill Android tablet. The microUSB and headphones jack are at the bottom. The microSD card slot and microSIM card slot rest under a flap that is above the camera. One unique feature about the Asus Fonepad is that it runs on the 1.2GHz single-core Intel Atom Z2420 with Hyper Threading. The Fonepad runs on Android 4.1.2 Jelly Bean and has Asus’ own custom launcher.

The closest competitor to the Fonepad is the Samsung Galaxy Tab 2. It has the same form factor and also shows off the ability to house a SIM card and make calls. Here’s a close look at the specifications of both the 7-inch tablets.

Design
The Asus Fonepad looks like your run-of-the-mill 7-inch Android device – which is to say that it has the same rectangle shape as its brethren, with curved edges. The front of the tablet doesn’t have any physical buttons. Above the 7-inch display you have the earpiece and the front facing camera. Below the display you have the Asus logo. Nothing fancy and we like it simple. The bottom of the tablet has the headphones jack along with the microUSB port that works for data transfer as well as charging. The left of the Fonepad houses the power button as well as the volume rocker.

The strip of plastic above the camera is removable and removing this strip for the first time can be a bit difficult. This is where you will find place for the Micro SIM card and the MicroSD card. The plastic strip may be difficult to remove but the trade-off is that it is quite sturdy. The bottom of the rear panel houses the speaker grill and is very reminiscent of the design we have seen on the iPad (for housing the speaker).

Overall, the design of the Asus Fonepad is quite premium and better than what we have seen other tablets in the same price bracket offer. The 7-inch form factor isn’t the most comfortable to hold to your ear and we suggest you use a headset when using it to make calls. As a tablet, the design of the Fonepad is good.

Interface
If you have used any Asus tablet in the past such as the PadFone, Transformer Pad and more, you will feel right at home with the UI. The lock screen is standard Android where you have the option to either unlock the tablet, go to the camera or access Google Now. Once unlocked, you have access to the five customizable home screens that you can load with apps and widgets.

At the bottom if the display (not below it), you have the standard back home and multitasking buttons along with a fourth button that gives you access to Floating Apps. These are apps that appear as small windows on the display. We have seen this ability to “pop up” apps on the display on the Samsung Galaxy S III, Samsung Galaxy Note II, LG Optimus G and the Samsung Galaxy Note 800. The only downside here is that if you want to access content in the background, you will have to close the floating app. Unlike the Optimus G, where you can control the opacity of the app to access background content, here you will have to close the floating app. In the Floating App drawer, you can have access to apps such as the browser, calculator, dictionary, email, sticky memos, video player, and more you can also customize the Floating Apps launcher by arranging the apps in the order of your preference. As of reviewing the tablet, you have access to 35 apps that can work as floating apps.

Apart from access to the Google Play store, the Fonepad comes with a slew of Asus specific apps on the device. To start with, you have access to Asus Splendid, which lets you adjust the settings of the display to get the best colour temperature, saturation and hue. There is also an on-board Audio Wizard that gives you access to a bunch of modes including Music Mode, Movie Mode, Recording Mode and more. There is also a power saving mode giving you access to an Ultra Saving Mode, Optimized Mode and a Customized Mode. You also have apps such as Asus Studio, Asus Story and Asus Paint that come preloaded on the tablet. Asus also offers users 5GB of free storage on the device.

Overall, the UI of the Fonepad is a welcome change from the stock Android, TouchWiz and more skins that we have started seeing on tablets. There is enough here to keep you interested without leaving you frustrated and that is a good thing.

Performance
Around the Rs. 16,000 price point, there are a lot of tablets available to the consumer. Here is a quick benchmark comparison to see how the Fonepad compares to the competition.

To start with, the Fonepad runs on the Intel Atom Z2420 1.2GHz single-core with Hyper Threading and we have some powerhouse tablets such as the Nexus 7 that runs on the Nvidia Tegra 3 chipset and the iberry Auxus CoreX4 3G tablet that runs on the Samsung’s Exynos 4412 ARM quad-core 1.6GHz processor. So it isn’t surprising to see that in the benchmark score, the Fonepad isn’t ahead of the competition. This doesn’t mean that the tablet is a bad performer. The first time we saw the Intel Atom Z2420 was with the Xolo X500 and its performance on the smartphone was quite impressive.

In our continuous video playback test where we had the brightness and audio on full, the Fonepad lasted for 10 hours giving it a great battery life.

The touchscreen response of the Fonepad too is one of the better ones out there. It is quite comfortable to type on especially in portrait mode. The landscape mode might be a bit difficult and take some getting used to. The keyboard as the standard QWERTY layout with the number 1 to 9 and 0 in the first line.

The 7-inch IPS LCD display of the Fonepad has a 1280x800 pixel resolution giving it a 216ppi. The resolution is at par with the Nexus 7 and the display on the tablet is very vibrant and the viewing angles are great. It is a real treat to watch movies, play games and run multimedia apps on the tablet. The display has two modes – Normal and Outdoor. The Outdoor mode essentially increases the brightness of the display for use under direct sunlight. The audio output from the built in speaker is quite average.

We played a lot of Angry Birds Star Wars, Subway Surfer and Dead Trigger on the Asus Fonepad tablet. All the games worked on the tablet. The downside is that when the action got even a little intense on screen, the performance lagged while playing Dead Trigger. We have seen the game perform a lot better on competing tablets. The other two games ran quite smoothly. We faced a bit of lag with the device especially if you have a bunch of heavy-duty apps running in the background.

Since the Asus Fonepad tablet boasts of the ability to make calls, we made a few calls from the device. The voice quality at both ends was clear and well audible. The only drawback is that it is quite inconvenient to hold a 7-inch device close to your ear.

Bottom Line
The Asus Fonepad is a direct competitor to the Samsung Galaxy Tab 2 (and also the upcoming Tab 3). The tablet has some pretty interesting features such as Floating Apps, has the ability to playback video smoothly, make calls and a great build. On the downside, it is plagued with a bit of lag and the rear camera is poor. At 8GB, the built-in storage isn’t great either. If you are looking for a tablet around the Rs. 15k price point, you can definitely consider this device along with the Galaxy Tab 2. If you are on a tighter budget (10K) you can take a look at the iberry Auxus CoreX2 3G tablet as well.