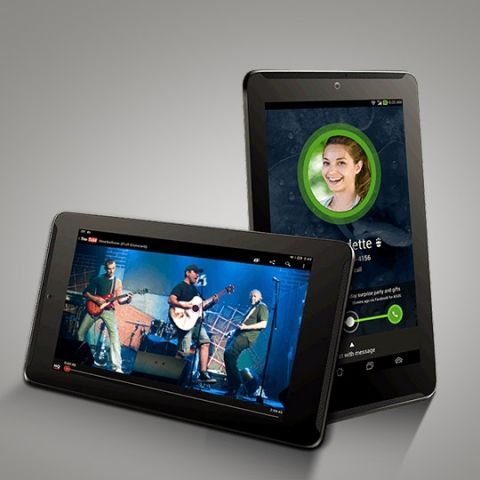 The Asus FonePad 7 is a direct competitor to the Samsung Galaxy Tab 3 211. The tablet has some pretty interesting features such as Floating Apps, the ability to play heavy-duty apps smoothly and make calls. On the downside the display is reflective, voice call output is low and the build is a step down from the predecessor. If good voice calling capability is a priority for you, then we suggest you take a look at the Samsung Galaxy Tab 3 211. If an overall great performing tablet is what you are looking for, then we suggest you consider the Asus FonePad 7.

We have seen the launch of quite a few 7-inch tablets in the Indian market with the ability to make calls. These devices range from the absolute budget offerings to premium one including the iberry Auxus CoreX4 3G tablet, Samsung Galaxy Tab 3 and many more.

At a glance
Starting with the specifications, the FonePad 7 has a 7-inch IPS display with 1280x800 pixels resolution. It will be available in two colours – black and white. Under the hood, the FonePad runs on the Intel Clover Trail Plus Z2560 dual-core processor clocked at 1.6GHz along with 1GB of RAM. It has 16GB built-in storage expandable via a microSD card. The rear has a 5MP camera and the front has a 1.2MP video-calling camera. It runs on Android 4.2.2 Jelly Bean and is skinned with a custom UI. A 3950maH battery powers the entire package.

Design
For the most part, the Asus FonePad 7 looks like your run of the mill 7-inch Android device – which is to say that it has the same rectangle shape as its brethren. Above and below the 7-inch display you have stereo speakers. When held in portrait mode, you have the front facing camera at the top. Even though the tablet is 7-inches, it looks really small as the bezel surrounding the display is thick.
The back of the tablet has a plastic finish and it comes in two colours – black and white. The rear houses the 5MP camera without a flash. The bottom of the tablet has the microUSB port, the top has the headphones jack, the right has the volume rocker along with the power button and the microSD card slot and the left has the SIM card tray.

The rear of the last gen FonePad tablet had an aluminium back with a gunmetal finish to it, which made it look like a premium device. It feels like a downgrade with the plastic finish on the FonePad 7. The rear of the tablet doesn’t open, which means that you do not have access to the battery.

The thickness of the FonePad 7 is the same as its predecessor but it is lighter and that’s a good thing. The difference in weight isn’t much, but it is appreciated.

Overall, the design of the FonePad 7 is what we have come to expect from tablets in the market today. It’s comfortable to hold and use and we still maintain that holding a 7-inch device to your face looks downright silly while using it as a phone.

UI and Interface
If you have used any Asus tablet in the past such as the first FonePad, PadFone, Transformer Pad and more, you will feel right at home with the UI. The tablet runs on Android but Asus has added its own interface to it. The tablet runs on Android 4.2.2 Jelly Bean. You have the option of keeping the lock screen simple i.e. swipe to unlock or you can add access to lockscreen apps that will help you jump to the app directly from the lock screen. You can jump directly to the calculator, browser, notes and more apps.

At the bottom of the display (not below it), you have the standard ‘back’, ‘home’ and multitasking buttons along with a fourth button that gives you access to Floating Apps – very similar to the FonePad. These are apps that appear as small windows on the display. We have seen this ability to “pop up” apps on the display on the Samsung Galaxy S III, Samsung Galaxy Note II, LG Optimus G, Samsung Galaxy Note 800 and many more devices. The only downside here is that if you want to access content in the background, you will have to close the floating app. Unlike the Optimus G, where you can control the opacity of the app to access background content, here you will have to close the floating app. In the Floating App drawer, you have access to apps such as the calculator, AudioWizard, dictionary, video player, countdown, stopwatch and more. You can also customize the Floating Apps launcher by arranging the apps in the order of your preference. As of reviewing the tablet, you have access to 36 apps that can work as floating apps.

Apart from access to the Google Play store, the FonePad comes with a slew of Asus specific apps on the device. To start with, you have access to Asus Splendid, which lets you adjust the settings of the display to get the best colour temperature, saturation and hue. There is also an on-board Audio Wizard that gives you access to a bunch of modes including Music Mode, Movie Mode, Recording Mode, and more. There is also a Power Saving mode giving you access to an Ultra Saving Mode (Maximize the battery life and disconnect the network connection when the device is suspended), Optimized Mode (extends the battery life and always keeps the network connected) and a Customized Mode.

The keyboard on the tablet isn’t stock Android and you have access to features such as swipe down for upper case, swipe up for symbol and more. This is quite handy once you get used to typing on the tablet.

Overall, the UI of the FonePad is a welcome change from stock Android.  Sony has its own UI on the Xperia Tablet Z and Samsung has TouchWiz on the Galaxy Tab lineup. The Asus UI is nice and there is no bloatware to hamper the experience.

Performance
Here is a quick benchmark comparison to see how the Asus FonePad 7 stacks up against its predecessor and the Samsung Galaxy Tab 3 211.

The Asus FonePad run on the Intel Atom Z2560 chipset with a dual-core processor clocked at 1.6GHz. It trumped the Galaxy Tab 3 211 in all the benchmarks and that is impressive. Now, let’s take a look and see how it performs in the real world.

The touchscreen response of the FonePad 7 too is one of the better ones out there. It is quite comfortable to type on especially in portrait mode. The landscape mode might be a bit difficult and take some getting used to. The keyboard has the standard QWERTY layout with the numbers 0 to 9 in the first line.

The 7-inch IPS LCD display of the FonePad has a 1280x800 pixel resolution giving it a pixel density of 216 ppi. The resolution is at par with the Galaxy Tab 3 211 but the display is dull even on full brightness. Using it in outdoor conditions will be tough.

It is a real treat to watch movies, play games and run multimedia apps on the tablet. The display has two modes – Normal and reading. The reading mode essentially reduces the brightness and contrast to suite for prolonged use.

Special mention needs to be given to the audio output from the tablet. You have two stereo speakers on the face of the tablet, which means that the audio is in your face when playing games and watching movies and that is awesome.

Coming to the video playback capabilities of the Asus FonePad 7, the table played the MP4 files natively very well. The AVI files weren’t recognized at all and the MKV videos were recognised but not the audio. Navigating the timeline of the videos was smooth. It is also possible for you to watch the video in a pop out window while typing a mail or doing some other work courtesy the video-player floating app. The downside is that navigating the timeline here and changing orientation was laggy.

Playing games on the tablet was a treat too. Graphically heavy games such as Real Racing 3 and Dead Trigger ran smoothly on the tablet. Multitasking capabilities too were smooth.

Since the tablet boasts of the ability to make calls, we made a few calls from the device. The voice quality at both ends was clear but the volume felt a bit soft. Switching to the loudspeaker didn’t make much difference. You also have the ability to record the calls.

In our continuous video playback test where we had the brightness and audio on full, the FonePad lasted for 6.5 hours, that suggests average battery life when compared to the competition. If you use the power management apps and use the device conservatively (switch off Wi-Fi, Bluetooth and more) you can get more than a day’s worth on it.

Bottom Line
The Asus FonePad 7 is a direct competitor to the Samsung Galaxy Tab 3 211. The tablet has some pretty interesting features such as Floating Apps, the ability to play heavy-duty apps smoothly and make calls. On the downside the display is reflective, voice call output is low and the build is a step down from the predecessor. If good voice calling capability is a priority for you, then we suggest you take a look at the Samsung Galaxy Tab 3 211. If an overall great performing tablet is what you are looking for, then we suggest you consider the Asus FonePad 7.