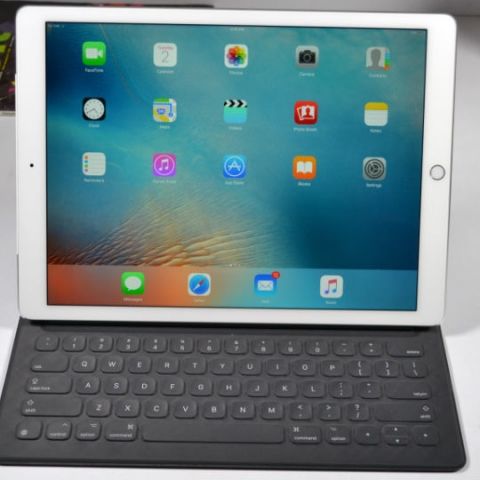 The iPad Pro is a powerful tablet with top of the line performance. However, it isn't the ideal device for the average consumer. If you have specific need that justfies the purchase of the iPad Pro, then by all means go ahead and buy it. For the rest of you looking for a great tablet to consume content, you are better off looking at the Android alternatives or the iPad Air 2.

The build of the iPad Pro is top notch. The tablet has a 12.9-inch display, and a form factor that screams iPad on steroids. This isn’t a bad thing if you are using the tablet as a drawing tablet or doing any task that requires such a large display. Browsing websites is a great experience as you get the full desktop version of a page on the iPad Pro. But, when it comes to simple tasks like, reading a book, etc., it seems really big and unwieldy. The tablet has four speakers – two on top and two at the bottom when held in portrait mode, and the audio is really loud. Whether you watch videos on YouTube, Netflix or any other app, the audio delivery from the device is great. The same can be said for the screen, too. With a pixel density of 264 ppi, it is a gorgeous display. The display has great viewing angles and good visibility under direct sunlight, too.

Moving to the performance, the iPad Pro is a beast. Split-screen multitasking works very smoothly. Not all the apps support split-screen view perfectly though, and this is one area where the tablet has great potential to grow. If you are watching a video posted on a website, you can pull it out and the video will play in a small window on the tablet display. You can reposition this video on the tablet and have any two apps running on the tablet, and the entire experience feels seamless. This feature is present on a number of Android smartphones and tablets for quite some time now. However, the split- screen playback or the pull out playback isn’t there for YouTube and that is disappointing.

Moving to the keyboard accessory (sold separately), the story is a little different. The Smart Keyboard can be best described as a keyboard panel being attached to the iPad’s Smart Cover. It takes time to get used to positioning it, or attaching it. One good thing about the keyboard is that it doesn’t have a battery, and doesn’t need to be charged. It draws battery from the tablet and connects via Bluetooth, and there is no setup process required. The Smart Keyboard also snaps on to the tablet magnetically, and the attachment of the keyboard with the main body is quite assuring. Unlike some other tablet-laptop hybrids, which have an adjustable hinge, there is only one position at which you can rest the iPad Pro on the Smart Keyboard, and this is a big disadvantage. If you are sitting in a café and there is too much sunlight glare on the display, you can’t adjust the tilt. You will have to change your own position, or improvise on viewing angles. 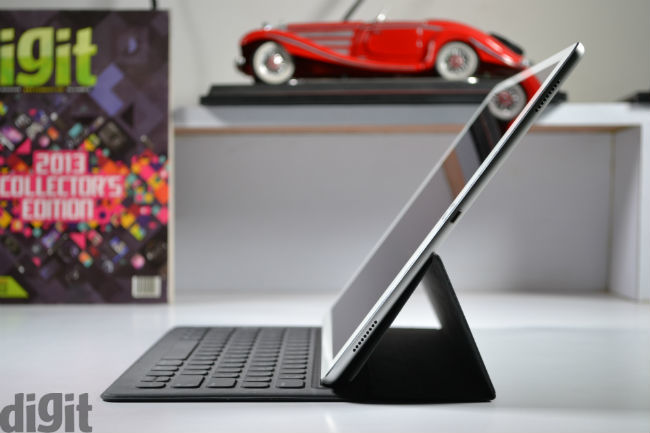 If you are sitting in a café and there is too much sunlight glare on the display, you can’t adjust the tilt.

Another disadvantage of the iPad Pro is that it feels more like a tablet than a hybrid, and this is more because of the OS. There are only so many things you can do when multitasking on iOS. Sure, you can press Command+Tab to switch between apps, but the convenience of this feature is better exploited on Windows and OSX, when compared to the iOS experience. It also seems like a majority of the apps are designed for use on the iPad Air 2. As a result, there is a lot of unused space on the screen (when using Google Docs, for example), and it feels like you are using a mobile version of these apps on the iPad Pro.

When it comes to gaming, this tablet is a beast. You can play any game off the App Store on the tablet, and it will run perfectly. Though there is enough screen space for controls, the tablet is uncomfortable to hold for long sessions of gaming.

Apple Pencil (also sold separately), works way better in tandem with iPad Pro than what we have seen on the Samsung Galaxy Note 5 with Samsung’s S-Pen. If you are an artist who wants to draw on a tablet, don’t need to look beyond the iPad Pro.

Overall, Apple’s iPad Pro isn’t for everyone. The device has very specific uses, and is targeted for those who will exploit the potential of the large display and the power under the hood. If you are looking for a tablet for content consumption like reading books, watching movies, playing games and more then the iPad Air 2 is a great option. If you are looking for a near-PC like experience on a hybrid device you are better off looking elsewhere.