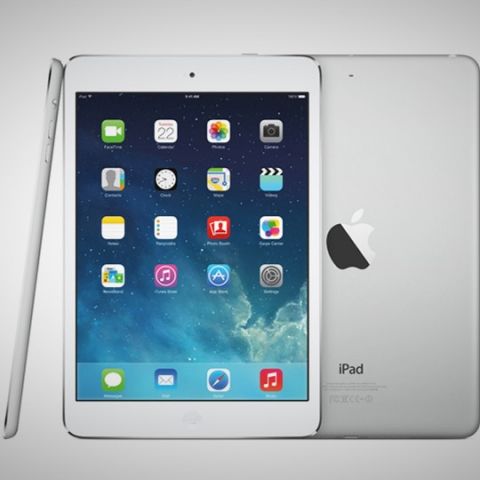 This is truly the new iPad we've wanted for a long time, at least as far as the design and form factor is concerned. With the iPad Mini, it was clear that Apple’s focus would be on improving the portability and use comfort. The only drawback is that the thinner aluminum on the back does not feel as solid as the previous generations. But, without doubt, the best tablet in the market is now even better.

After a two generations of refreshes with largely the same design and form factor, the iPad has received a refreshing update. With what is essentially the 5th generation of the tablet, Apple has given the iPad a proper redesign - thinner bezel, and gone is the tapered design in favour of a much flatter look.
Check out our video review of the iPad Air below.
Build & Design: A proper redesign

It is finally in the fifth generation that Apple has given the iPad a proper design and form factor tweak. Ever since the second generation, the iPad has carried on with the tapered design with thin sides. But, with the iPad Air, the biggest change is the slimming down of the bezel, on the right and the left of the screen. To make it even simpler - imagine an oversized iPad Mini, and that is what the iPad Air essentially looks like. Not at all a bad thing, because the iPad Mini’s design is extremely sophisticated, and when it was launched last year, it was extremely refreshing as well.

But, the real sense of the change comes when you compare the Air with the outgoing 4th generation device. The iPad Air’s dimensions read - 240 x 169.5 x 7.5 mm, while the previous generation’s dimensions were somewhat like this - 241.2 x 185.7 x 9.4 mm. Width difference is mostly because of the thinner bezel on the right and left of the screen. However, the true meaning of this refresh is understood by the weight reduction that has happened - 469 grams now as against the 652 grams earlier. It is a tad lesser than 200 grams, but that makes an unbelievable amount of difference. It would not be too harsh to say that ever since the iPad 2, weight gain had become a part of the upgrade cycle, without anyone even mentioning it.

In a design element seen on the iPhone 5, the iPhone 5c, the iPhone 5s and the iPad Mini, the stereo speakers sit on either side of the Lightning connector. This placement is good in a way, because it will ideally not get blocked by the hand in most ways you may try to hold the tablet. Secondly, this is an upgrade over the single speaker setup that the previous iPad offered.

Despite all the changes, Apple’s precision regarding the build quality is very much evident with the iPad Air. There are absolutely no rough edges, and even little elements like how stable the volume keys are has been improved upon. The only little niggle that I can find is that there is a plastic-esque thud when you tap on the back panel. This is due to the thinner and lighter materials used, but it does take away some of the ridiculously solid feel of the previous iPad. However, just for clarification’s sake, the iPad Air does not feel flimsy at all. 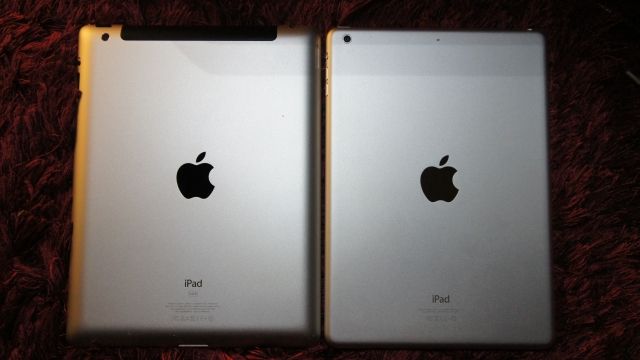 The old and the new - the iPad Air is on the right, the iPad 3 on the left, and the visual tweaks are quite apparent - flatter sides, the straight slab look and the storage capacity isn't mentioned anymore. 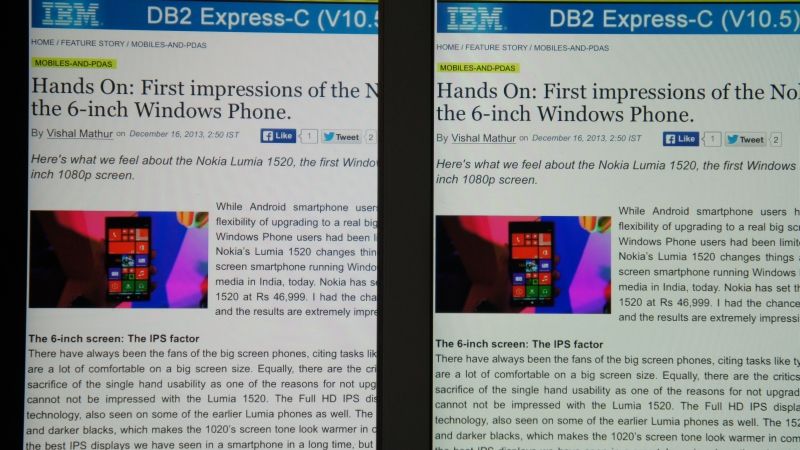 While the same display has been used in both tablets, the iPad Air's display (on the right) offers slightly warmer tones. Both displays are equally crisp when it comes to text rendering. 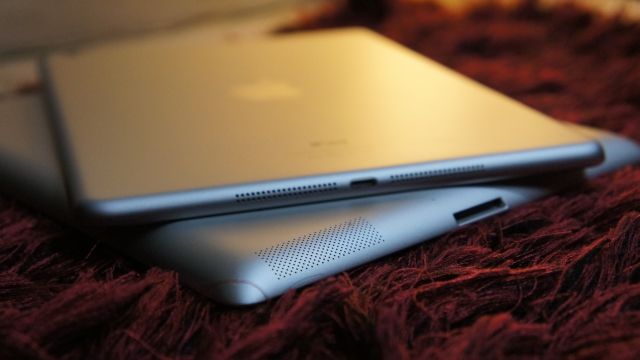 With the dual speaker grill on either side of the lightning connector, the audio output from the iPad Air is much better than the previous iPads. 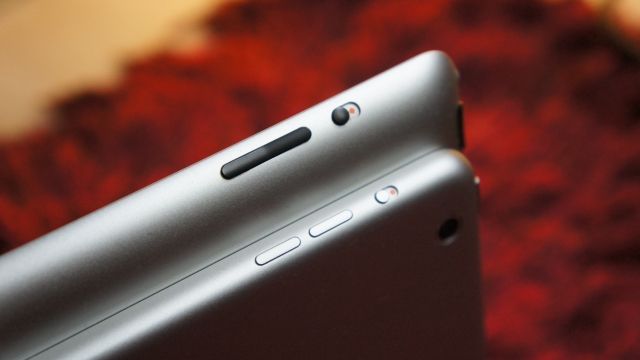 The redone volume rocker and the slider key. But, the positioning remains the same - on the right side spine. 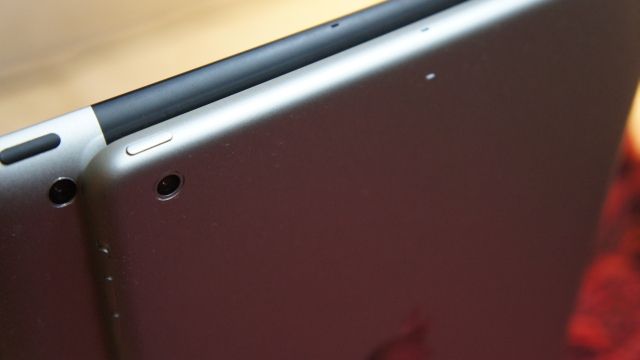 The camera positioning remains the same, but the design of the back panel is very different. Notice the slightly smaller power key as well.

Performance: Much more than a token upgrade
When the fourth-generation iPad was launched, it was powered by a custom version of the A6 processor - seen then in the iPhone 5 - called the A6X. The X version processor offered better performance than the chip in the iPhone 5. For the iPad Air update, Apple has not bothered with the X customization, and packs in the same 64-bit A7 processor as the iPhone 5s. The A7 has 1 billion transistors, double that of the A6 chip that it succeeds. And this number is not far from the desktop processors as well.

Some understanding of the performance can be had by looking at the synthetic benchmarks. The iPad Air scores 1478 in the GeekBench single-core benchmark, and clocks 2694 in the multi-core test. Compare this to the iPhone 5s running the same processor - 1414 (single-core) and 2558 (multi-core). There is a slight improvement in the scores, which may not mean much for the most part in the real world performance, but will make the difference during heavy app loads. Partly the reason is that the same processor on the iPad clocks at 1.4GHz, while the iPhone 5s clocks at 1.3GHz, with 1GB of RAM on both.

Not many apps have been updated to take full advantage of the 64-bit architecture, but the ones that have make all the difference. For one, Apple’s own suite of apps are utilizing the 64-bit boost, and Safari's performance shows that. The iPad Air clocked 5142 in the Octane benchmark test, while the previous generation iPad scored 2891. In the Sunspider browser benchmark (lower score is better), Safari on the iPad Air scored 401.1ms, while the Safari browser on the 4th generation iPad scored 707.7ms. These are by far the best Sunspider scores on a tablet or smartphone, till now.

Even for apps that aren’t really utilizing the newer architecture, the performance is blazing fast, compared to the outgoing iPad. All apps open faster, multi-tasking has very little performance impact and games like Real Racing 3 and GT Racing 2 load faster. It's interesting to note that after 45 minutes of driving around corners very quickly in Real Racing, the iPad Air heats up a lot lesser than the previous version. This despite the fact that there is more power packed in and there is lesser breathing space internally for the components. If nothing else, this can only be good for the battery, which will see lesser degradation of the cells due to heat.

Graphics: Everything looks better
For the gamers out there, the performance you are about to witness is a massive jump over the fourth gen iPad’s PowerVR SGX554MP4 GPU. The newer PowerVR G6430 chip is a huge step forward. The 3D Mark Ultimate benchmark clocks 15241, while the predecessor would top out at 10,819 in the same test. But, despite the massive jump in numbers registered in the benchmark tests, it's important to identify where the performance improvements happen. Running the same version of Real Racing 3 on both iPads, there is a clear difference in app load times, as well as circuit rendering times. While the display is the same on both tablets, the same graphics look better on the iPad Air - the elements look cleaner, trackside elements look smoother and detailing is much improved as a result. To be honest, the game never stuttered on the previous iPad, and neither does it on the Air.

iOS 7: Needs more polish
However, there are still a few rough edges that need to be sorted out, but none are the fault of the iPad Air. iOS 7, for what it is, still needs a generous dose of polish. Certain animations stutter and, transitions between apps and back from the task manager aren’t always very smooth.

Battery: Smaller, but not inferior
Because of the smaller footprint, the iPad Air chucks the 42WHr battery from the previous iPad, and makes do with a smaller 32WHr pack. Does this negatively impact the battery life that you can expect from the new iPad? Not really, because this does stay very close to Apple's claimed 10 hours battery life. One hour of movie playback at 100% brightness and 50% volume takes up 5% of the charge. With the brightness turned down to 50% and the audio not always in use, you can expect this to go well beyond 10 hours of backup for non-video playback usage scenarios.

To buy or not to buy?
This is truly the new iPad we've wanted for a long time, at least as far as the design and form factor is concerned. With the iPad Mini, it was clear that Apple’s focus would be on improving the portability and use comfort. Which is why it's good to see that apart from the expected specifications boost, the design has been tweaked for the better. Compared to the fourth generation iPad, the iPad Air is approximately 200 grams lighter, but that 200 grams makes a massive difference. The only drawback is that the thinner aluminum on the back does not feel as solid as the previous generations. But, without doubt, the best tablet in the market is now even better. For anyone looking to buy an iPad for the first time, this is the smart choice, unless the smaller sized iPad Mini is more relevant for you. This is also a worthy upgrade for anyone who already has the previous generation iPad and is looking for a new experience.