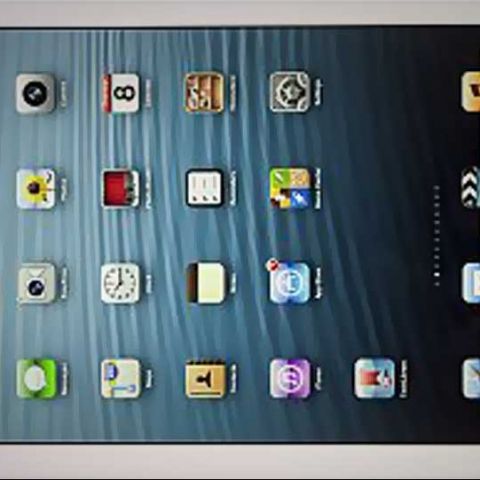 Apple's latest iPad is the best large tablet you can buy, period.

Now in its fourth iteration in two years, the Apple iPad continues its reign as king. The best large tablet you can buy today, the Apple iPad (4th Generation) has it all: top performance, a stellar screen, a surprisingly good camera, speedy Wi-Fi, and a breathtaking library of spectacular apps. Unlike other 10-inch tablets on the market, it's the full package, which makes it a very rare five-star product, and a slam dunk for our Editors' Choice.

Just like the second- and third-generation iPads, this tablet has a 9.7-inch screen surrounded by a black (or white) bezel, with a curved metal back, and a single Home button. Apple's magnetic Smart Cover, which was released with the iPad 2, clips on just fine. The tablet still has a sealed-in battery, and no ports other than a standard headphone jack. There's a 1.2-megapixel camera right above the display on the middle of the top bezel, and a 5-megapixel camera in its traditional location on the back upper left corner.

On the bottom is Apple's new, compact Lightning connector, which isn't compatible with earlier accessories, but Lightning accessories are starting to appear, and I'm confident the ecosystem will develop quickly with more than 8 million Lightning-compatible phones, PMPs, and tablets already in people's hands. 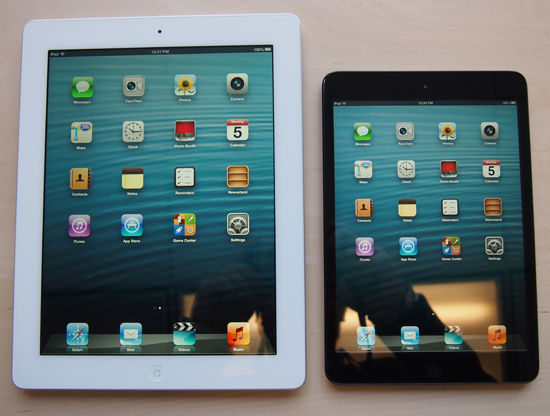 The 2,048-by-1,536-pixel Retina Display is sharp, clear, and bright. At 263 pixels per inch, it beats every other tablet on the market right now except Google's Nexus 10, which offers a 300ppi, 2,560-by-1,600 10-inch screen. But both Web browsing and gaming look better on the iPad's screen because of superior software choices. In the browser, Apple picked better-looking, better-kerned fonts, and cross-platform games showed generally superior graphics and coding on the iPad.

The Retina display takes its toll on battery life just as it did on the third-gen iPad. I got 5 hours, 36 minutes of video playback at full brightness, almost the same figure as the previous model. (That's still longer than the Nexus 10, which clocked in at just over 5 hours on the same test.) I'll retest at half brightness as well; with the third-gen iPad, halving the brightness bumped video playback time up to 11 hours. And the big battery still takes a long time to charge: Six hours on our first try, even with the new, more powerful 12-watt charger.

Apps and Performance
The new iPad, like the old iPad, runs Apple's iOS 6. See our full review for a look at the ins and outs of the iPad's operating system. We've also reviewed and profiled hundreds of iPad apps if you want to get an idea of the richness of the software for this device.

In the eight months since the third-generation iPad was released, most of the apps I have been using for testing have been upgraded to Retina versions. The OS smoothes and improves standard elements within many non-Retina-enhanced apps, too, including text and embedded maps.

Speaking of those maps, Apple's troubles with mapping don't affect this iPad as much as other iOS devices because the Wi-Fi-only model lacks GPS. Still, though, if it can find Wi-Fi the tablet can find its location, and you can download a third-party mapping app if you like; here are 10 solid Apple Maps alternatives. 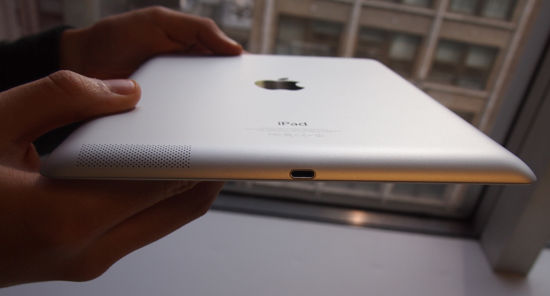 The latest iPad packs an Apple A6X processor which Geekbench reports to be running at 1.4GHz (Apple won't confirm or deny). The custom-designed A6, as seen in the iPhone 5, was already one of the fastest CPUs available; the A6X enhances the A6 with even better graphics.

The results are stunning. The fourth-gen iPad outmatched all other Apple products on the Geekbench and GLBenchmark benchmarks, scoring 1,768 on Geekbench to the iPad 3's 749. Similarly, the heavy game "Need for Speed: Most Wanted" launched in 18 seconds on the new iPad as compared to 37 seconds on the iPad 3. Yes, it's more than twice as fast. With the iPad 3, I found apps that stressed the older A5 processor. That just isn't the case any more.

Apple's efficient software comes into play when comparing against the Google Nexus 10 too. While the Nexus 10 notched a faster Geekbench score at 2,480, the iPad creamed it on all of our actual Web-browsing tests, Sunspider, Browsermark, and GUIMark, as well as in the speed of loading pages. I saw delays and stutters in the Nexus 10's interface that I never saw on the iPad. Updating a large number of apps went more slowly on the Nexus than on the iPad. And under heavy strain, the iPad got a bit warm, but the Nexus 10 became even hotter.

Part of this is thanks to the iPad's excellent Wi-Fi performance; on PCMag's 5GHz 802.11n network, I got 37Mbps down on the iPad and 23Mbps down on the Nexus 10. Both speeds are fast, but it's the iPad's processor and software that seem to be making the difference here.

Gaming performance is significantly better on the new iPad, too. Intense games like Need for Speed: Most Wanted and Asphalt 7 run at a smooth 60 frames per second on the new iPad and render landscapes in advance of viewing; the Nexus 10 had frame-rate trouble in both games and would render buildings as I came up to them, which was distracting. Scores on the GLBenchmark graphics benchmark tell the tale. On GLBenchmark's "Egypt HD On-Screen," which renders a complex game-like scene, the iPad 3 scored 22 frames per second, the Nexus 10 hit 27, and the iPad 4 marked 42. That's a noticeable difference.

The new iPad upgrades both cameras. The 1.2-megapixel front camera records 720p video; the rear camera takes 5-megapixel stills and 1080p video. The cameras offer the same excellent performance as on the Apple iPad mini. The front camera takes sharp 1.2-megapixel shots, even in low light. In very low light, images get quite noisy, but that's preferable to blurry. Its 720p HD videos record at a noisy 24fps in very low light, and 30fps outdoors. The main camera captures sharp, clear, and well-balanced 5-megapixel images and 1080p video at 30 fps indoors and out. I think people look ridiculous taking photos with the main camera of a 10-inch tablet, but many people do it. 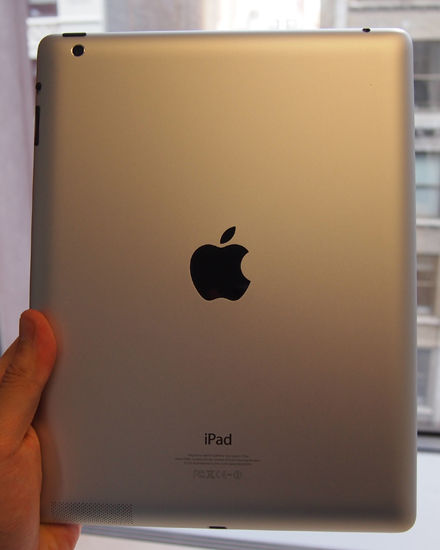 The single speaker on the bottom of the iPad is tinny and of medium volume like most tablet speakers, but the headphone amp is impressive; I got rich, powerful sound through a pair of Monster earphones. The iPad also works just fine with Bluetooth headphones and speakers.

The iPad has always been an excellent media player, and there's no change here. The hi-resolution screen lets you watch 1080p HD videos without downscaling, and they look spectacular. You can also output HD video to a TV either through Apple's $49 HDMI adapter, or via Wi-Fi using Apple TV's AirPlay feature.

The combination of the new processor and faster Wi-Fi fix the AirPlay problems I saw on the previous iPad, too. Using a 5GHz network, I streamed a 1080p version of "The Hunger Games" purchased from iTunes on an Apple TV, and watched a high-quality stream of "Arrested Development" on Netflix with no skipping. High-quality racing games showed good frame rates over AirPlay, but there was a bit of lag in the controls because of Wi-Fi latency.

Comparisons and Conclusions
Yes, I'm rating the iPad as the best 10-inch tablet, while its little brother, the iPad mini, isn't the top seven-incher. The big iPad's performance stands head and shoulders above the competition, and it provides premium screen and processor specs to match its premium price. The iPad's library of tablet-focused apps matters a lot more, and look better, at 9.7 inches rather than 7.9. And while a 4:3 aspect ratio tablet looks a bit too squarish in the smaller size, it's an ideal form factor for a larger device.

Most 10-inch Android tablets, including the laudable, but flawed, Google Nexus 10, still lack the level of polish and the range of third-party apps designed for Apple tablets. Yes, the Google Play store offers a small selection of featured tablet apps, but for the vast majority of Android apps, it's hard to tell before downloading (and paying for) them whether you'll get a true tablet app or a blown-up phone app. Once again, those scaled phone apps look okay on a medium-resolution, seven-inch tablet and generally awful at a super-high-res 10 inches, so this is more of a concern with larger tablets.

The Samsung Galaxy Note 10.1 leaped into our esteem by offering up uses that aren't covered by the standard Android apps: multi-windowed Web browsing and a pressure-sensitive stylus. While the Note maintains its windowing advantage and is still an excellent tablet, the new iPad has caught up with third-party pressure-sensitive styli, including the Editors' Choice Adonit Jot Touch.

And how about the Microsoft Surface RT? It's definitely a competitor, but it isn't quite there yet. The A6X processor's performance beats the Nvidia Tegra 3's, and the Retina screen beats the Surface's 1,366-by-768 panel. More importantly, though, Apple's massive library of excellent apps and accessories dwarfs the still-tiny ecosystem around Windows RT. (Remember, RT can't run true desktop Windows apps.) Want to dance around clicking a keyboard onto your tablet? The iPad offers plenty of options like the Editors' Choice Logitech Ultrathin Keyboard Cover .

The previous iPad received 4.5 stars; I dinged it for its A5 processor. At the time, I told iPad 2 owners to wait for the next model. And this is it. The fourth-generation Apple iPad is the only product I have ever personally rated five full stars because it represents the tablet state of the art.