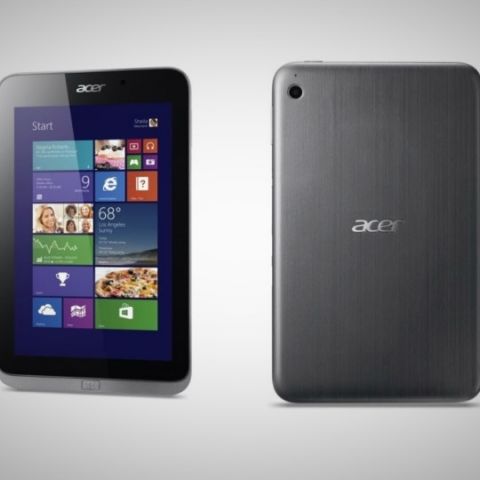 If you are comfortable with Windows and are open to the idea of getting yourself a Bluetooth keyboard and mouse, then the Acer Iconia W4 will make a good buy. However, if you're looking for a pure tablet experience that will give you optimal portability, you'd be better off considering the new Nexus 7 or the iPad Mini.

Amidst the gore and gristle of the bloody battle between Android and iOS for the mantle of the best tablet OS, it would be easy to forget that Windows 8 was developed primarily for touchscreen devices. The lack of really interesting Windows 8 tablets from OEMs and the confusion surrounding the RT variants, are the main reasons for that, and now with the Iconia W4 8-inch tablet, Acer is trying to get Windows 8 back into the limelight.

Does the Iconia W4 emerge as a good all-round tablet, or is Windows 8 its only interesting aspect? Let’s find out.

Unlike most Android and iOS tablets, the Iconia W4 forgoes a Qualcomm or a MediaTek CPU and instead goes for the Intel Atom Z3740 (Bay Trail) quad-core processor clocked at 1.3GHz. The tablet also has 2GB of RAM and 32GB internal storage and supports microSD cards as well. The W4 sports an 8-inch IPS LCD display with a resolution of 1280x800 pixels and uses a 5MP front camera and a 2MP front camera for imaging.

Take a detailed look at the specs of the Iconia W4 and how it compares to competing devices (albeit with different form factors and operating systems) like the Lenovo IdeaPad Lynx K3011, the XOLO Play Tegra Note and the Asus Transformer Book T100 in our comparison table.

The Iconia W4 comes straight out of the box with Windows 8.1, the complete OS and not just the RT version that limited you to the Metro interface (yes, I’m still calling it that, so, deal with it). I have to stress on this because what you get with Iconia W4 is the complete Windows OS experience that is miles ahead in terms of actual scope than any tablet OS out there. Add a wireless keyboard and mouse into the mix, and you’ll be able to use the Iconia W4 as a Windows PC, something that not even an iPad or a Nexus tablet can boast of. Of course, whether the complete Windows experience is actually usable on an 8-inch touchscreen, is a different story altogether and something I’ll get to in a bit.

The tablet can be used in both the tiled interface and the regular desktop modes, which means you can make use of both Windows 8 ‘modern UI’ apps and the regular desktop software. The Iconia W4 includes some pre-installed Acer applications such as Acer Docs (that lets you edit and save Word documents but no create them) and Acer Remote Files (that lets you sync files between connected devices). However, none of these are actually something that are worth using. For instance, Acer Remote Files requires you to download an app on your iOS or Android device, sign in using a unique Acer ID and then access files on the Acer tablet on your phone and vice versa. However, the Acer Remote Files app resolutely refused to sign me in on the tablet and on my iPhone, an error message kept popping up stating that the app couldn’t access the tablet. Such a half-hearted approach towards software makes it even clearer that unless a company knows what it wants to do and how to do it, why even bother?

On the other hand, the Iconia W4 does come with the full version of Office 2013 (Home and Student) which itself offers cloud saves which is absolutely great and completely defeats the purpose of the Acer Docs app. You also get access to the Xbox Live store where you can download a bunch of good looking games (most of which will cost money).

There’s really nothing special about the way the Acer Iconia W4 looks. It’s a standard looking black slab of glass that’s surrounded on all sides by a metallic silver bezel. At 430 grams, the Iconia feels a little heavy but its compact size does not make it unwieldy. It’s also quite thick at 10mm. The W4 does a good job of fooling you into believing that it’s built using a lot of metal. However, most of it is plastic made to look like brushed metal. The back flexes a bit on the application of a little bit of extra pressure, but overall, the build is solid with nothing to complain about.

Acer heard the criticisms meted out to the Iconia W3’s display and has given the W4 an IPS display at the same resolution of 1280x800 pixels. The screen is bright and vibrant and offers good viewing angles too. I did wish for a fused display, the likes of which we’ve seen on the Lumia 1020 where there is very little gap between the panel and the glass that makes up the display, but this display holds up well too. However, the 8-inches of real estate does seem less when we get to the desktop mode. The icons tend to be a lot smaller and so do the fonts. Yes, you can scale them up to be larger but then they end up looking quite ugly.

Quite appropriately, this brings us to the problem.

The problem therein lies in the fact that a lot of times the Iconia W4 feels like it’s confused about whether it’s a tablet or a PC. The Modern UI works well as a tablet interface that can be controlled with touch. However, there are plenty of times that you will have to go into desktop mode in which touch input is at best, average and at worst, a pain. As we’ve seen in the distant past with Windows Mobile, standard Windows elements are too small to be used accurately with fingers. Even though the Iconia W4’s touch response is far better than that of the Windows Mobile smartphones of yore, it still manages to be quite an adventure using touch to navigate the Windows desktop interface, especially when you have multiple windows open.

There is also very little reason to stick to the modern UI on the Iconia W4. There aren’t a lot of apps (especially high quality popular apps) that use the modern UI elements, which means that most of the time, you will find yourself installing traditional programs and end up wishing for a keyboard and a mouse to use them.

Acer has told us that it is planning to launch a keyboard for use with the Iconia W4 and anyway, you can use any Bluetooth keyboard and mouse with this tablet. It just seems strange that Acer didn’t bundle a set with the tablet itself, because most users will end up using it as a traditional PC for a significant amount of time.

So, yes, the Bay Trail processor that powers the Iconia W4 is quite good especially for one that sports the Atom branding. The four cores means that there’s nothing really beyond the reach of the Iconia in terms of stuff that you would do on a regular basis on your laptop. Browsing, watching HD videos etc. were all activities that went off without any issues. We also installed a couple of good looking games from the Xbox Live Store such as Soulcraft and The Gunstringer: Dead Man Running and they both ran well without any framerate issues. Of course, installing ‘proper’ PC games will result in poor performance but hey, no other tablet lets you install Crysis!

We also ran a couple of PC benchmarks on the Iconia W4 just out of academic curiosity. In PCMark Vantage 7, the Iconia scored 2,639 points. To compare, the Asus Transformer Book T100 scored 2,373 points in the same test while a budget laptop like the HP TouchSmart 11 managed 1,360 points.

In our battery benchmark test, the Iconia W4 lasted for 279 minutes which translates to about seven hours of normal use on a single charge. This is very good for a laptop and decent for a tablet.

The Iconia W4 also packs in two cameras- a primary 5MP one, and a secondary 2MP one. Photos shot with the 5MP camera look predictably bad, with even photos shot indoors under sufficient light looking like they’ve been drained by a vampire with a thirst for colours. The 2MP camera, on the other hand, is quite good for video calls which should be the only thing you use a tablet’s camera for.

For Rs. 24,999, the Acer Iconia W4 is slightly expensive for a tablet and well priced for a budget laptop. Of course, since it is a tablet, just ignore that last bit. Whatever Microsoft’s intentions are with respect to Windows 8, chances are that, more often than not, you will use any tablet that is powered by the OS as a PC. This is not only because Windows as an OS has much more scope compared to iOS or Android, but also because as a pure touch-driven OS that requires its own set of apps, Windows 8 is not up to mark.

If you are comfortable with Windows and are open to the idea of getting yourself a Bluetooth keyboard and mouse, then the Acer Iconia W4 will make a good buy. However, if you’re looking for a pure tablet experience that will give you optimal portability, you’d be better off considering the new Nexus 7 or the iPad Mini.