Acer Iconia Tab A500 - Good user experience, but not quite iconic Review 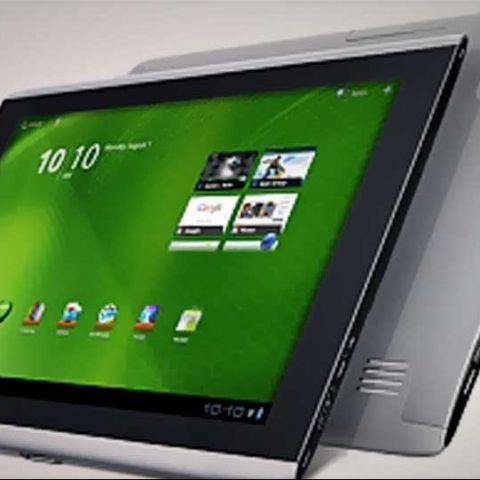 The Acer Iconia Tab A500 has good underlying software coupled with decent hardware. But we think the display can be improved. If not an IPS panel, the least Acer can do is get rid of the blue cast. The connectivity options give it a slight edge over the iPad, and also the user interface of the Honeycomb OS and its response is great. However, the OS needs a learning curve and is not as intuitive as the iOS. As far as Android tablets go, this is the best on the market right now thanks to its dual core processor and Honeycomb OS. The price of Rs. 27,990 is lower than the iPad 2 (16GB). It is a value for money product for the features and performance on offer.

Acer Iconia Tab A500 - Good user experience, but not quite iconic detailed review

As far as tablets go, Apple’s iPad has sort of set a benchmark of what they should be. And even though we have seen companies churning out tablets every month, nothing has come close to it in terms of usability, build quality, compatibility with apps, etc. Android tablets are dime a dozen in the market, but most of them come with an operating system that was built for smartphones. Windows OS tablets have also made an entry in the market, but haven’t got much traction as far as sales go.

Android had released the Honeycomb operating system sometime earlier this year, as an OS meant for the tablet product category. The Motorola Xoom was the first tablet to feature it. But we have got our hands on Acer’s Iconia Tab A500 which sports the Honeycomb OS and has reached the Indian market before the guys are Motorola Mobility got the Xoom here. So is Honeycomb OS the answer to iOS and can the Iconia Tab A500 provide that much lacking competition to the ruler – the iPad? Let’s find out...

Coming in a grayish silver brush metal finish body, the A500 does not have any sharp edges. The rear covering peeps out from the top and lower portion on the front side. The screen is 10.1-inch wide diagonally and has a resolution of 1280x800 pixels. It is an LED backlit LCD screen with a glossy finish. The rounded edges allows the tablet to be held comfortably in your palms, but we would have liked a bit more grip. The power button is located on the top left hand edge and is easy to reach and has the 3.5 mm audio jack just above it as well as the mini HDMI port on the lower edge. The volume controller is located on the top edge beside the orientation lock button which has a nice click mechanism. On the right hand edge there is a power port at the top, a mini-USB port and USB port on the lower edge.

The 5 MP camera section is located on the on the top right hand edge of the rear side and sports a single LED flash whereas the bezel on the left hand side houses the front facing 2MP camera. Two speakers are located on the lower half and you will notice your fingers covering them when you hold the tablet in the landscape mode. We really liked the case it comes along with, which can bend to form a stand against which you can place your A500 and enjoy a movie.

Google has built the Honeycomb user interface from the ground up and resembles nothing like its smartphone cousins. The display is divided into five home screens. The main home page has three buttons on the lower left hand corner for going back, coming to the home screen and looking at the apps that have been opened at a time. It houses the NVIDIA Tegra 2 system on chip with a snappy 1 GHz dual core processor. Navigating through the home screens is breezy and you will notice the outlines of frame disappearing as you settle onto one screen, a nice touch. Long holding a particular home screen will give you a zoomed out view of the five home screens with options to add more widgets, applications, wallpapers, etc to the screens via a simple drag and drop mechanism.

[RELATED_ARTICLE]You can see the last five opened applications by simply tapping on the button beside Home. Getting into the Settings menu from the task bar requires three clicks unless you are looking for common tasks such as setting up WiFi, turning Notifications on/off, changing brightness and activating Airplane mode. This may seem like a round about way of doing things. The Settings menu is quite exhaustive with an additional option called Dolby Mobile. The on board Youtube widget has a stack of videos arranged in a domino setup. Gmail application syncs without any issues and has a left and right hand panel arrangement with the settings options arranged on the upper right hand corner. The bundled browser is quite good with the tab functionality which allows you to have around 16 tabs open at a time. You can scroll through the tabs which is a smart rather than clicking on the Next Tab option to get to tab number 15.

You will notice apps placed in a drawer section on the homepage, which houses related applications. There’s Multimedia, Social, eReading and GameZone which are the broad categories and you will have related applications such as audio / video player apps under Multimedia, Lumiread and the Browser under eReading and so on. With the help of a round button housing the plus sign, you can add extra applications under each section. This functionality is somewhat similar to the Folder function in the iOS, except that in the Honeycomb OS, you do not have the ability to name the folder. Visually though it looks much better than the Folder implementation on the iOS, but then again, it just adds more clicks needed to get into a particular application.

Acer Iconia A500 has some native multimedia applications such as NemoPlayer – organizes your photos, music and videos and plays them back when selected. Photo Browser 3D allows you to see your albums using gestures to toggle between photographs, we found the implementation very laggy. MusicA is an application that claims to listen to an audio track and give you the details of the tracks being played. We tried it with popular artists like Eminem, Pink Floyd, Evanescence and Porcupine Tree, but its GraceNote server could not come up with any results. So on the whole, the native multimedia apps, even though they look great, fail to impress. YouTube was probably the only app which worked without any hitch.

The Social Jogger application tends to collate your Twitter and Facebook timeline and give you updates, but for some reason we were getting updates that were 5 hours older despite having an auto refresh time of 15 minutes, which was just strange. LumiRead is a native ebook reader application and is just like any other ebook reader app out there, with options to segregate the books according to genres. It also has one touch access to bookstores, although at present the countries to choose from were just Germany and China.

Click next to read more about the Iconia Tab A500's screen, its camera and video capabilities, battery life, and our verdict...

The Iconia A500 has a conventional LCD screen which was a huge letdown. The picture quality is good and it has good brightness levels, but the colour accuracy is debatable as we found a heavy bluish cast on the screen. When placed beside an iPad 2 we could clearly see the difference. We tried adjusting the brightness to get a good contrast but the bluish cast ruins things. In one of our videos, a hot pink coloured wall was rendered as violet on the A500.

The onscreen keypad is great to type on in both the landscape and portrait mode. In the landscape mode, you will not be able to type comfortably with your thumb, so you will end up using one hand to hold the tablet and the other to type. Holding the tablet in the portrait mode allows easy typing, but your as the keypad is located in the bottom, balancing the tablet while speedy typing is an issue. We did not have any issues with typing errors though.

[RELATED_ARTICLE]The on board 5 MP camera is quite OK for casual shooting in outdoor conditions. Shots taken indoors were noisy. Video shooting is poor with jerky videos and there is no option to zoom in or out while live shooting. However we liked the implementation of camera functionalities in the rotary dial sort of a way. Tapping an icon opens up a range of options to choose from so that you do not have to get out of the camera mode to finalise your settings. Sound quality is quite decent thanks to the Dolby Mobile setting option which allows you to adjust Treble and Bass and select from a range of equalizer settings. We just found the volume to be very low, and with the Dolby Music disabled, you will really have to strain your ears to listen to the audio. Even though the fingers tend to cover the speakers, the sound output is not affected. Do not expect great audio though. We found the bass lacking the punch and low frequency sounds went for a toss.

Video playback was a problem area because we could not play most of our test videos despite converting them to the formats supported by the Iconia Tab. We had to rely on YouTube's full HD videos for this test. The video quality was good, but we did notice some noise and banding in scenes with solid colours. The reflective screen can be annoying if you have light sources in the background.

The A500 has a mini HDMI port which allows you to connect the tablet to an LCD TV via an HDMI cable.

The Acer Iconia Tab A500 has good underlying software coupled with decent hardware. But we think the display can be improved. If not an IPS panel, the least Acer can do is get rid of the blue cast. The connectivity options give it a slight edge over the iPad, and also the user interface of the Honeycomb OS and its response is great. However, the OS needs a learning curve and is not as intuitive as the iOS. As far as Android tablets go, this is the best on the market right now thanks to its dual core processor and Honeycomb OS. The price of Rs. 27,990 is lower than the iPad 2 (16GB). It is a value for money product for the features and performance on offer.

Acer Iconia Tab A500 - Good user experience, but not quite iconic

Acer Iconia Tab A500 - Good user experience, but not quite iconic