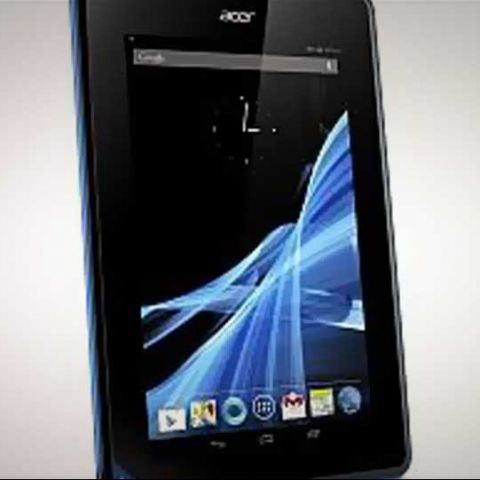 We had high hopes from the Acer Iconia B1. We hoped the performance and the build of the device were better. We liked the raw Android 4.1.2 experience and the touchscreen response as well as audio was nice. Games and apps too ran well. The device however has an underwhelming build, low battery life and didnï¿½t play HD .MKV formats. SD AVI files however ran well. If you have a budget of Rs. 8,000, you can consider this device for the raw smooth Android experience. If you can extend you budget by Rs. 2,000, you will have quite a few better options at your disposal.

Over the past 12 months we have seen the launch of quite a few budget tablets in India, and most of them, were made by companies such as Micromax, Spice, Karbonn, iberry, Zync and others. We haven’t seen any big international names try to gain a market share in this category. We have eagerly been waiting for the likes of Sony, Asus, Motorola and more to bring out devices that could give the budget players a run for their money. It seems the time has come that our prayers be answered.

Today, we have with us the Acer Iconia B1. It is a budget tablet priced at Rs. 7,999. This is one of the first budget tablets to hit store shelves from a premium brand. Does it pack a punch or are you better of with the tried and tested budget kings?

Design and Build
We have seen the iberry Auxus CoreX2 3G tablet priced at Rs. 10,990. The device was quite well-built for its price point. The same can be said for the WickedLeak Wammy Desire tablet. The Acer Iconia B1 screams budget from the minute you remove the tablet from the box, with a very plastic, almost cheap finish. 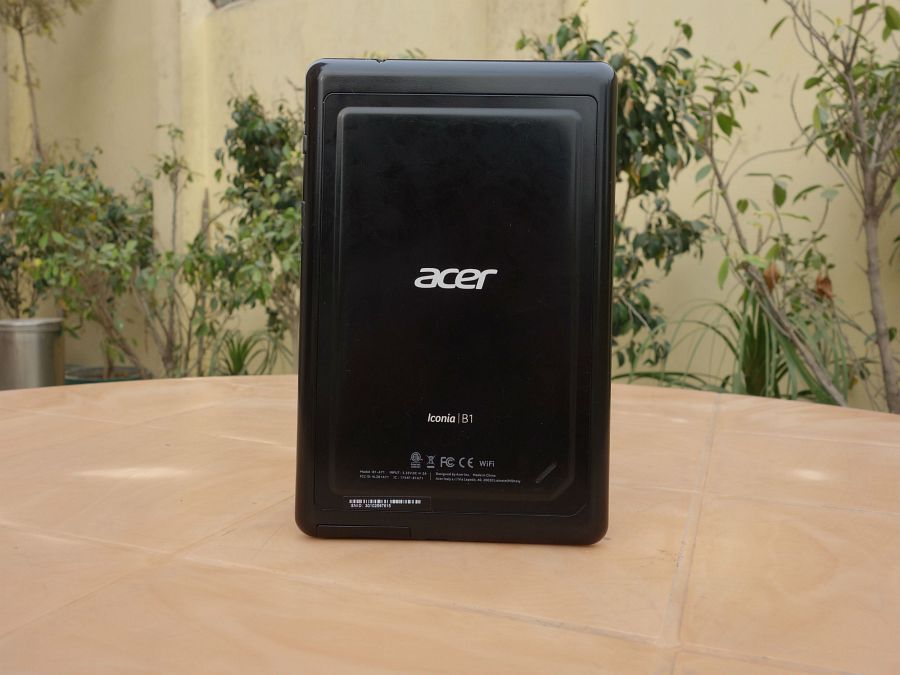 The front of the Acer Iconia B1 has the standard 7-inch display without any physical buttons that we have grown accustomed to from the plethora of tablets that we have seen. It houses the front facing camera. The display however feels smaller than 7-inches when you look at it. The rear of the tablet is very plasticky and feels hollow if you tap it, despite the fact that it has metal in the back as well. The build of the rest of the tablet can be summed up in one word – average. There is nothing here that will make you turn your head.

The design of the Acer Iconia B1 too has been kept to the basics. In budget tablets we find a large array of ports but Acer has kept things simple with the Iconia B1 has kept things simple. At the bottom you have the microSD card slot under a flap along with the microUSB port. The right of the tablet houses the volume rocker and the power button. The top of the tablet has the headphones jack. This design is ergonomic and easy if you use it in portrait mode more. 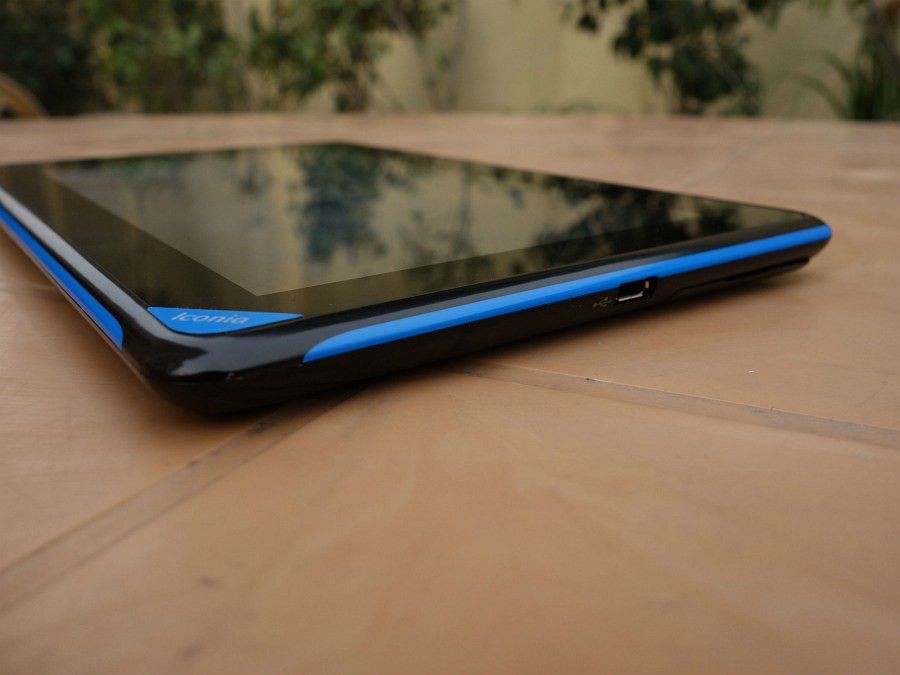 It is safe to say that the design of the Iconia B1 is more reminiscent of a smartphone than a tablet. The connectivity options are very limited, and the device feels like it is designed to work better in portrait mode rather than landscape.

Overall, the design on the Acer conia B1 is very reminiscent of a smartphone rather than its budget tablet brethren. The build on the other hand is very plasticky and feels extremely budget.

Features and Specifications
Let us get the specifications of the Acer Iconia B1 out of the way. To start with, the tablet runs on Android 4.1.2 Jelly Bean straight out of the box. 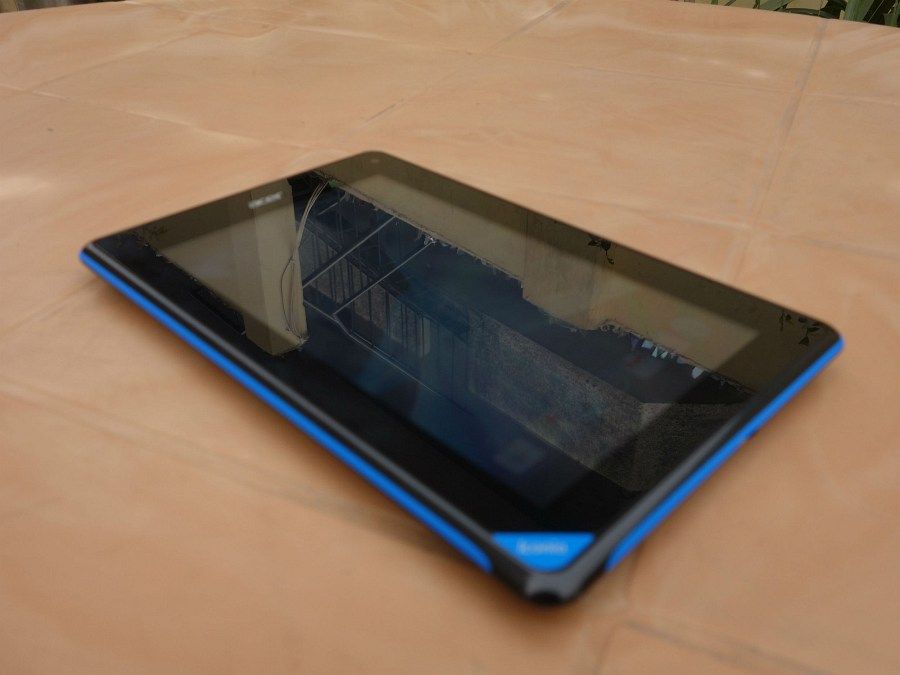 The Iconia B1 has a 7-inch display with a 1024x600 pixel resolution. It has a dual-core MediaTek processor clocked at 1.2GHz, 512MB of RAM, 8GB built-in storage expandable via a microSD card. It compromises on a SIM card slot. It has Bluetooth 4.0, which is great, and Wi-Fi 802.11 b/g/n. The front facing camera has a VGA resolution.

There aren’t any noteworthy preloaded apps on the device, though you have access to the Google Play store to satisfy your app needs. Copying data between the tablet and a PC or Mac is simple drag and drop.

The Iconia B1 has the rawest Android experience that we have seen on a tablet. The notifications drop down is from the top of the display just like Jelly Bean smartphones rather than the bottom right usually found on other Android tablets. 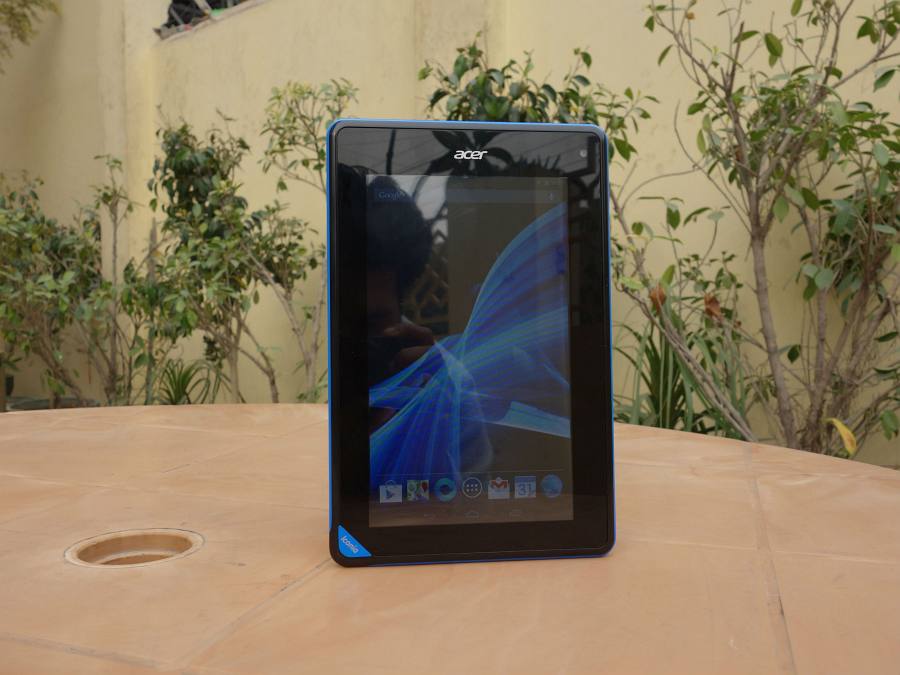 Performance
Starting with the display of the Iconia B1, it is 7-inches in size with a 1024x600 resolution giving it a 170ppi. We have seen crisper looking displays on the iberry Auxus Core X2 3G but that is a device that is priced higher as well. The display may not be the sharpest and the brightness on full too is a tad lower than we’d like, but it is good for consuming multimedia content and reading text.

The one thing that annoys us when it comes to budget tablets is that the response of the touchscreen is underwhelming. Here we must say that the Iconia B1’s touchscreen response is quite good. Despite a little lag, it is better than most tablets out there in the same price range.

Movies, apps and game ran smoothly on the Iconia B1. We played a few games like Temple Run and Dead trigger and they ran quite well. The tablet also doesn’t seem to support 720p HD MKV video properly, no matter if we used the native player, or a third-party one. It refused to playback the audio. 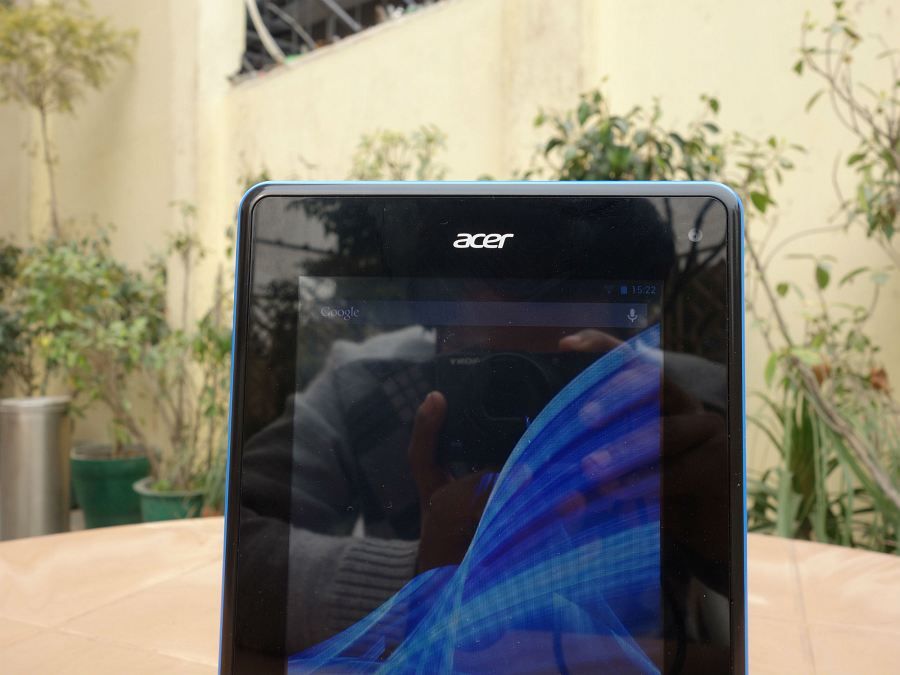 The audio from the Iconia B1’s on-board speakers too is something to talk about. It is quite loud. Be it videos you play on the Iconia B1 to YouTube and even the apps. We really liked the speaker on this device. It surpasses the iberry CoreX2 3G with ease.

The overall performance of the Acer Iconia B1 is smooth. Sure it is plagued with the same slight hesitation and lag found on all budget Android devices, but it was far less when compared to the other such devices that we have seen.

So how does the B1 compare to other tablets in its price range? Well, here is a quick look at the benchmark scores of the Acer Iconia B1 vs the Byond Mi-Book Mi5 and the Huawei Mediapad 7 Lite.

From the above benchmarks it is clear that the Acer Iconia B1 isn’t the best on paper but when it comes to real world performance, the device is quite smooth. The interface is good, browsing the Internet is a good experience, and with the responsive nature of the touchscreen, the pinch to zoom and general navigation is a lot of fun.

The Iconia B1 has a 2700mAh battery. In the continuous video playback test, it lasted for a little over 4 hours and that isn’t the best that we have seen. We wish the performance of the battery were better. If you are one who will use you tablet quite a bit throughout the day, we suggest you carry the charger with you. 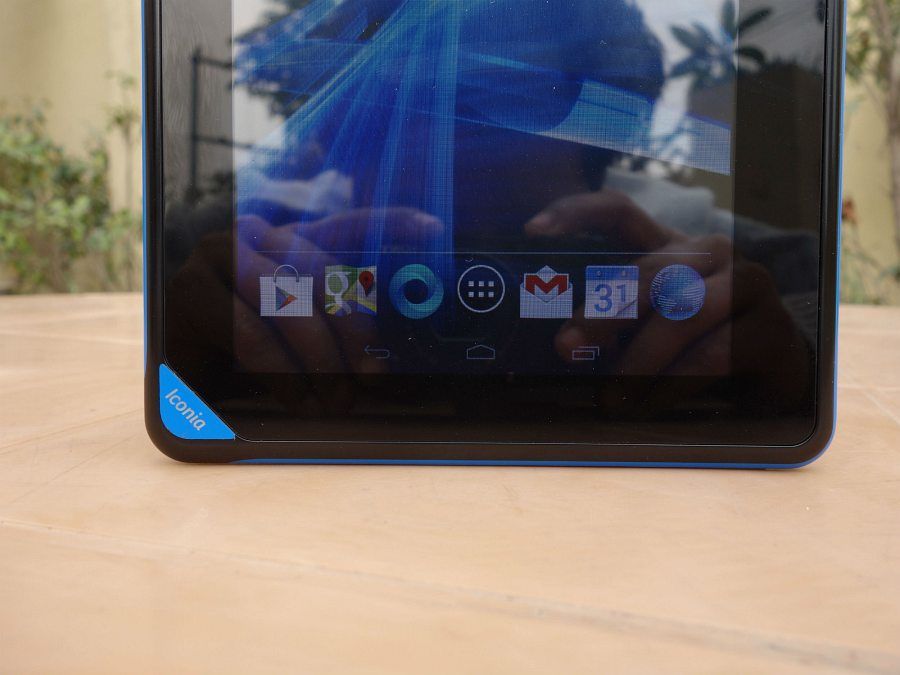 Bottom Line
We had high hopes from the Acer Iconia B1. We hoped the performance and the build of the device were better. We liked the raw Android 4.1.2 experience and the touchscreen response as well as audio was nice. Games and apps too ran well. The device however has an underwhelming build, low battery life and didn’t play HD .MKV formats. SD AVI files however ran well. If you have a budget of Rs. 8,000, you can consider this device for the raw smooth Android experience. If you can extend you budget by Rs. 2,000, you will have quite a few better options at your disposal. 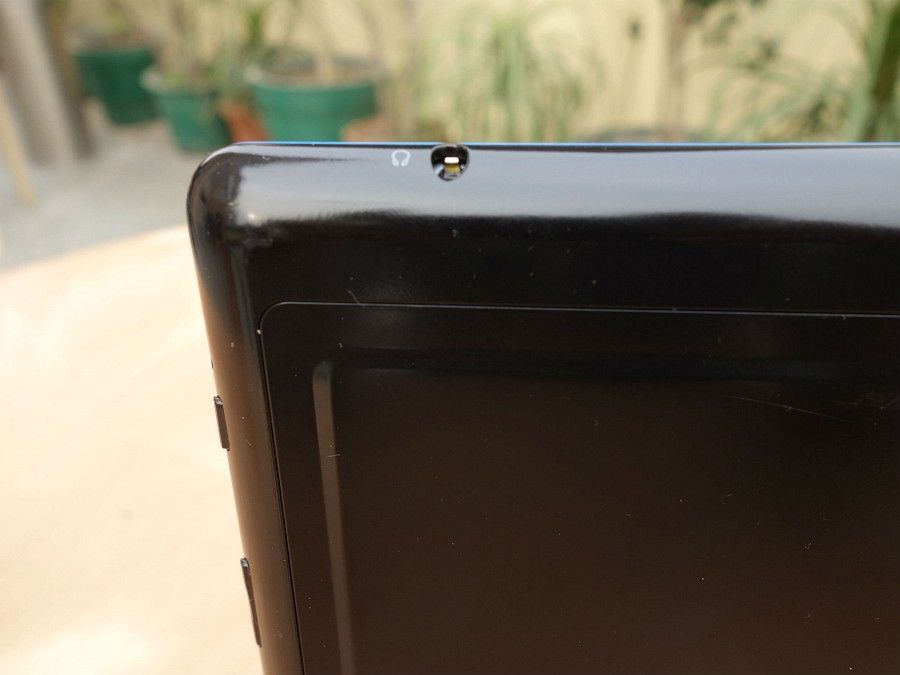