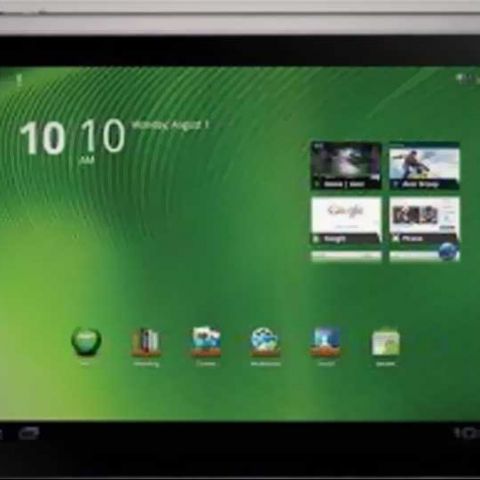 In a straight comparison to the Motorola Xoom, the Iconia A501 has the advantage of feeling lighter and bearing a much better display. However, we fail to understand why the A501 comes with Android 3.0.1 while the rest of the rivals are either on Android 3.2, or quickly moving to it. Beyond that, we were quite impressed by this tablet, considering it a good web browsing and multimedia device.

It is indeed a weird feeling to see so many Android Honeycomb tablets, all looking the same, UI wise! The kind of customization we have seen on Android devices till now has ranged between the simply amazing to the completely useless. Many of the customized UI’s tend to hinder performance, most of the time. However, with a plain UI and nothing bogging it down, it is easier to compare the performance of these devices.

You may be slightly perplexed as to how the A501 is different from the A500 (read our review of the Iconia Tab A500 here). The critical difference is that the A501 is a Wi-Fi 3G version of the A500, instead of only supporting Wi-Fi connectivity.

Look & Feel
The Acer Iconia A501 weighs precisely the same as the Motorola Xoom (read our review here)  – 730 grams (approx.), but just feels more comfortable to hold and use for a long duration. Tablet manufacturers these days are finding weird places to put the power key, and this time it is on the left panel, if the tablet is held in landscape mode, and that is accompanied by the 3.5mm audio jack and the HDMI out. On the top panel is the volume rocker. We did not like the mechanism to open the cover of the SIM card and microSD slot. First off, it is plasticky, and secondly, it inevitably gets twisted while removing. Long term prospects are not very good.

The placement of the camera on the rear side is a bit of an issue as well. If you are holding the Iconia A501 in landscape mode, your fingers will probably be touching the camera.

The build quality is quite good. No rough edges. Apart from not being the lightest tablet around, it does very well looks-wise.

Features
Lots to talk about here... Let’s start with the display. The 10.1-inch one has a resolution of 1280x800 pixels. An ARM Cortex-A9 dual core 1GHz processor, 1GB of RAM and a GeForce GPU power the A501. We received the 16GB (Wi-Fi 3G) version for review, and this is available in 16GB and 32GB internal storage versions. The microSD slot can support memory cards up to 32GB.

The A501’s 3G capability is only for data, and unlike some other tablets we have seen recently, this one won’t support voice calls. With a 2MP camera for video calls, and the 5MP main camera at the back, does look like a decent package, at least on paper.

The Iconia A501 still being stuck on Android 3.0.1 Honeycomb is a bit of a surprise though. While Acer’s rivals are releasing tablets with Android 3.2, or quickly upgrading them to that, the Iconia doesn’t seem to be walking that line. Unfortunately, the performance advantage offered by the latter versions of Honeycomb is lost on the Iconia.

However, since this is the made for the tablet version of Android, it offers a very different experience to what we saw on tablets based on Android 2.2 and Android 2.3. We had detailed this new Android experience in detail when we reviewed the Acer Iconia Tab A500 and Motorola Xoom, and that continues here, thanks to Google not allowing customization (by most manufacturers) of the OS on the tablet.

Performance
The dual-core 1GHz processor deservedly gets 1GB of RAM, allowing it to flex its muscles. The performance on offer is quite good. While you may not really feel that when navigating through the OS interface, the moment games kick in, the processor does really carry you along quite briskly. Even with a couple of apps and the web browser open in the background, the HD version of Need For Speed- Shift didn’t face any problems. The gameplay was smooth, and load times were quite quick. 1GB of RAM also helps a lot in this.

[RELATED_ARTICLE]The 10.1-inch display is quite impressive. The white levels are quite good, and that shows when browsing the web. The crispness also helps when you are reading text, be it on a webpage or a document. Colours are quite vivid, but gradation is a bit of a problem, as we noticed with some colours. That is okay most of the time, but will kind of ruin the experience if you are checking out a colour intensive visual. However, the extremely reflective nature of the display does mean you will be forced to use it at certain angles, depending on the light positioning. Even at full brightness, this is still an issue. Not only that, it catches dust and fingerprints very quickly. Another thing that we noticed with the display brightness level is that on auto mode, it doesn’t brighten enough when indoors in a brightly lit room. The reflective nature makes reading even more difficult, till you manually bump up the brightness.

The updated browser for Honeycomb looks very similar to the Chrome browser for the PC. Web page rendering speeds were quite okay, and it handled flash content quite well. The updated interface is the best thing though. The tabs are handled much better than the earlier version of the browser, something that can be afforded on the bigger tablet display. However, zooming in and zooming out on web pages isn't very smooth at all. If you attempt to do this before the page is completely loaded, it’ll just not respond. Even once it is completely done, the jerkiness of the entire process is a complete contrast to what we see in the Apple iPad and the iPad 2.

The built-in speakers are quite loud, and that helps with multimedia playback. However, while the clarity is there, it completely does away with the bass punch. For movies, it is okay, but for music, that is just disappointing. We faced some problems playing back a variety of HD video files as well, with unrecognized codecs the supposed culprit. The Standard Definition AVI files played back just fine. This is just yet another drawback of not updating to Android 3.2 - as that supports more codecs.

The cameras are not something to rave about. The quality of snaps is okay, but when seen on a big display, the noise is evident. Colour depth isn't too great either.

Battery life on the Iconia isn't as good as what we see on the Apple iPad, but definitely better than what we experienced on the Motorola Xoom. This one lasts about 3 days, from full charge to full discharge. This included a bit of web browsing, YouTube sessions and some music playback. Mind you, this was with the brightness set on auto mode.

Our Take
At a price of Rs. 32,990, the Iconia Tab A501 is a bit of a mixed bag in terms of the overall package. Good performance, nice device for web browsing, good battery life and solid build quality are the positives. However, the reflective display and lack of video coded support put paid to its chances of being the multimedia device you may have hoped to buy.