Acer Iconia A1-713 Review: Acer settles for too little 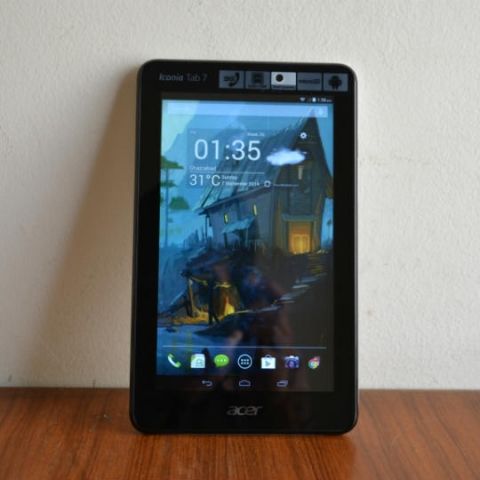 In the 7 inch budget tablet world, the Acer Iconia Tab 7 does nothing out of the ordinary or different than its competition. It just settles for identical specs of what other manufacturers have to offer and also suffers from many shortcomings. Acer could have tried for a slimmer build or matte back panel, but they haven’t. Acer has stuck to the orthodox and therefore missed a good opportunity.

Acer is no newcomer when it comes to the hardware market. The company has given us some amazingly slim and sexy laptops and has been trying to emulate that in its Android powered product range. Thus far Acer hasn’t even dented the market it’s trying to tap into. The major players in this market are well established phone manufacturers and some e-commerce companies. Now for about a year or so Acer has been trying to create some space for itself and its small screen products.

There are many seven inch tablets and they all come at a fairly reasonable price tag. All in all its a competitive segment, so let's find out where the Acer Iconia Tab 7 stands.

The tablet is not the slimmest or the best looking, it just settles for an understated look. Asus, a rival, has done a better job at making its Fonepad 7 more stylish. I would also add that a 7 inch budget friendly tablet doesn't need to be an absolute stunner but Acer could have done a better job, such as adding a matte back and making the tablet lighter. Instead, Acer has gone with a plastic back and as the tablet is almost 300 grams, it tends to slip while you hold the device in one-hand.

All 7 inch tablets generally offer a pretty identical front consisting of a 7 inch display surrounded by a half inch bezel and the Acer Iconia Tab 7 is no different. The 7 inch display on the tab offers a resolution of 1024 x 600 pixels but since the tablet has on-screen navigation keys the resolution comes down to 976 x 600 which is just about average for a tablet of this size.

The tab offers a screen density of 160 dpi which gives you good indoor visibility but it does take a hit outdoors. The display on the Acer Iconia Tab has very limited viewing angles and since the screen is very reflective you might end up watching your reflection on the screen in a well lit room.

Acer has gone with a Mediatek 8382 SoC with a quad-core CPU clocked at 1.3 GHz on the Iconia Tab 7. On the graphics front the Mali-400 GPU does a decent job while playing games. With 1GB of RAM onboard, the tablet performed without issues when it came to day to day usage. It was under heavy multi-tasking that I found it a bit sticky but not to an extreme degree. I was also able to play games like Dead Trigger 2 and Asphalt Airborne without any major hiccups.

Calling features are available on the device itself as the tab has a SIM card slot and though it worked, calls tended to sound a little noisy. A microSD card is also available and the tab takes upto 32GB of microSD cards. The tab features the power and unlock button as well as the volume rocker on the right side of the tab and both offer nice tactile feedback. The 3.5mm headphone jack and the USB port are located on the top and bottom of the device respectively.

On the UI front Acer has kept it very basic. The tab gives you a pretty stock like experience and runs on Android 4.4.2 Kitkat. Acer has sprinkled some additional apps which come pre-installed out of the box. But apps like “ab Docs” require you to sign up for an Acer ID.

In our battery test where we play a 1080p video on full brightness and with WiFi on for an hour, the battery dropped down to 82 percent. This means the tablet can play 5.5 hours of 1080p video before going dry completely. Under heavy usage of 4 hours in which I browsed YouTube, played games, browsed websites and took a couple of calls, I was able to drain the fully charged tab down to 10 percent battery.

The Acer Iconia tab 7 is just another tablet in the 7 inch budget tablet market. It is a bit overweight, underperforms a little, the screen is a bit low res, the call quality is a bit of a let down. Overall, if you are looking to buy a 7-inch budget tablet that for consuming media like videos or to browse the Web you should instead consider the Asus Fonepad 7, the Lenovo Tab A7 or the Samsung Galaxy Tab 3 Neo. At the end of the day the Acer Iconia Tab 7 is just another 7-in tablet that does not capture the imagination