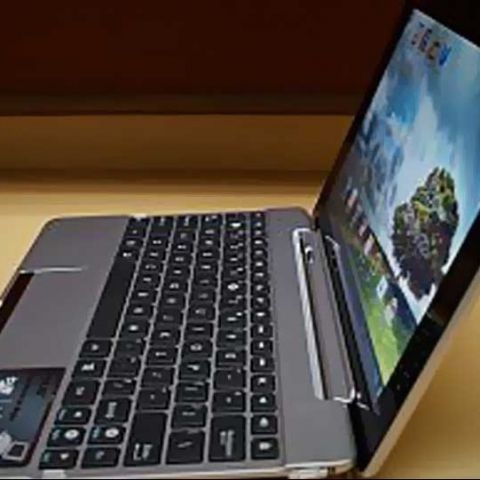 the Transformer Pad is a brilliant device and comes with a keyboard dock giving your tablet the utility of a netbook. It is however a little hard to recommend the Asus Transformer Pad TF300TG. For Rs. 35,000 you get the Samsung Galaxy Note 800, which is an equally brilliant device (although the build quality is a little poorer than the Transformer Pad) and comes with Samsung's S-Pen. It doesn't come with a keyboard dock though. If you are going to pick up a premium tablet, then why not go in for the iPad? It still has the best design, build and app ecosystem out there. If you are a fan of Asus products or want a netbook replacement then you can consider this device. Although an iPad with a Logitech keyboard case would be a better option.

Ever since the launch of the iPad, and its successors, we have seen quite a few premium tablets try to steal its thunder. In recent times, we have seen the likes of the Nexus 10, Samsung Galaxy Tab 10.1, Samsung Galaxy Note 800, Asus Eee Pad Transformer Prime and more make a great effort to stand up to Apple’s bestselling tablet PC. All these devices bring great power under the hood, the ability to run the latest version of Android and a launcher that gives you a unique Android experience on each tablet.

Some time back we had the chance to review the Asus Transformer Prime. Despite being exorbitantly priced, the tablet brought with it a bunch of features that made it a worthy device. It was built brilliantly, had some impressive specifications and a display to die for, apart from a really long battery life.

Today, we have with us the Asus Transformer Pad TF300TG. You can consider it as the successor to the Transformer Prime. It does however compromise on the build, some hardware specifications and the display when compared to its predecessor. Is it still a worthy contender in today’s tablet market?

At a Glance
The first thing that you will notice is that the Asus Transformer Pad TF300TG’s design is very reminiscent of a netbook since it comes with a keyboard docking station. The keyboard has a battery pack that can charge and power the tablet when docked in. This means that you can dock the tablet in the keyboard to charge the battery of the tablet on the go. The tablet runs on Android 4.2 giving you access to a bunch of features such as the lock screen widget and more.

Another thing that you will notice is that the Asus Transformer Pad TF300TG has a proprietary charger, which is very similar to the old iPad 30-pin dock connector. The tablet also has the ability to house a SIM card so that you have 3G data access on the go as well. The closest competitor to the Asus Transformer Pad TF300TG in India is the Samsung Galaxy Note 800 and iPad (4th generation). Just for the sake of comparison we’ve thrown in the specs of the Nexus 10 as well.

Design
At a first glance, the Asus Transformer Pad TF300TG looks just like its predecessor the Eee Pad Transformer. Take a closer look and you will notice that Asus has cut some corners when it comes to the build quality of the tablet. The face of the tablet has the 10.1-inch display and there are no physical buttons around the display. The front has only the front facing camera. The bottom of the tablet when held in landscape mode has the proprietary connection port that also doubles up as the connector for the docking station. The right houses the headphones jack and the top has the power button. The left of the tablet houses the volume rocker, HDMI out, microSD card slot and the SIM card slot.

The rear of the Asus Transformer Pad TF300TG has an 8MP camera without a flash. The rear of the tablet is plastic and is a letdown from the overall premium feel you get from the device. The rear has a textured white panel, which is quite comfortable to grip.

Overall the Asus Transformer Pad TF300TG is a good looking and well built tablet but compared to its predecessor, it feels quite cheap.

Moving on to the docking station it has a gunmetal grey finish, which looks really great. The hinge in which the tablet rests is very well built and feels sturdy. In terms of connectivity options, the left of the keyboard has proprietary charging port. The right of the tablet has a full sized USB port along with an SD card slot. The keyboard has chiclet style keyboards but if you are a regular sized keyboard user, you might find the layout of the keyboard a little cramped and it will take some getting used to. It also houses a track pad, which works surprisingly well.

The Asus Transformer Pad TF300TG’s dock’s track pad also recognizes two-finger scrolling while browsing the Internet or navigating the settings. When you use the track pad, a cursor appears on screen just like a Windows or Mac notebook and this is a nice touch. I found myself using the track pad a lot more than I expected when the tablet was docked into the keyboard station. It was also a comfortable experience replying to long mails and typing documents although it isn’t as seamless as a notebook.

Overall, the design and build of the Asus Transformer Pad TF300TG and the keyboard dock is premium even if it isn’t as well built as the Transformer Prime.

UI and Interface
If you have used any Asus tablet in the past such as the PadFone, Transformer Pad, or FonePad, you will feel right at home with the launcher and UI. Since the tablet runs on Android 4.2 Jelly Bean you have access to lock screen apps as well as all the other Jelly Bean goodies. You also have access to two launchers on the tablet. Let us start with the Android 4.1 launcher. The lock screen is standard swipe to unlock and there are no added goodies here. You have access to the five customizable home screens, which you can load with apps and widgets. At the bottom left of the display you have access to the standard Android back, home and multitasking menus. The bottom right brings up your notifications and shortcut to settings. There is no drop down notification bar here.

It is nice to see that you don’t have to compulsorily change the UI once the OS is updated. Users have access to whichever UI they prefer on the Asus Transformer Pad TF300TG. You can change the UI from the settings menu. On the tablet you also get access to 8GB of cloud storage.

The Asus Transformer Pad TF300TG doesn’t come preloaded with a bunch of apps and nor do you have access to “Floating apps” like you do on the FonePad. The UI skin is quite minimalistic, and of course, you have access to the Google Play store to satisfy all your app needs.

As you can see, since both the tablets run on the same chipset, their benchmark scores a nearly at par, with just slight variations. The battery life of the Asus Transformer Pad TF300TG is quite stellar. With the dock plugged in it ran for more than 12 hours in our continuous video playback test and that is a very good thing. We had the brightness and volume at maximum throughout the test.

The touchscreen response of the tablet is what you’d expect from a Rs. 40,000 tablet – it’s as smooth as silk. The onscreen keyboard of the Asus Transformer Pad TF300TG is also really comfortable to type on especially in landscape mode.

The 10.1-inch display doesn’t have a stellar pixel density at 149ppi especially when you compare it to the likes of the Retina Display iPad but it is a great display nonetheless. We saw a bunch of movies on the display and the visuals were crystal clear. Even in fast action sequences, the display performed very smoothly. It also ran all the video formats we threw at it be it MP4, MKV, AVI and more in both SD and HD. The only downside to our movie watching experience was that the display is reflective and the black levels aren’t the best.

The Asus Transformer Pad TF300TG also has three preset power modes to choose from – power saving mode, balanced mode and performance mode. Using each mode affects the overall performance of the tablet and the battery life as well.

The gaming capabilities of the tablet are quite impressive too. We played some Dead Trigger, Angry Birds Star Wars and Subway Surfers and all of them ran very smoothly.

Bottom Line
For Rs. 42,265, the Transformer Pad is a brilliant device and comes with a keyboard dock giving your tablet the utility of a netbook. It is however a little hard to recommend the Asus Transformer Pad TF300TG. For Rs. 35,000 you get the Samsung Galaxy Note 800, which is an equally brilliant device (although the build quality is a little poorer than the Transformer Pad) and comes with Samsung’s S-Pen. It doesn’t come with a keyboard dock though. If you are going to pick up a premium tablet, then why not go in for the iPad? It still has the best design, build and app ecosystem out there. If you are a fan of Asus products or want a netbook replacement then you can consider this device. Although an iPad with a Logitech keyboard case would be a better option.