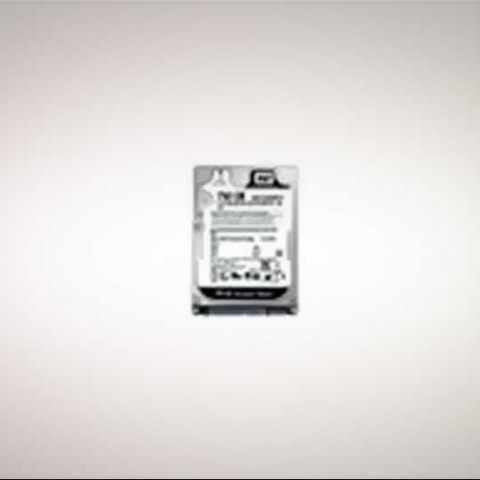 At a price, (that we find too good to be true!), of Rs. 5,275, the Scorpio Black WD7500BPKT is an absolute steal. It's a very fast drive - highly suitable for those who use their notebooks to game a lot, and anyone who wants speed. The only minus we can possibly think of is the amount of heat produced, which is substantial, if not alarming, but expected from a 7,200 rpm notebook drive.

Last week, we tested Western Digital's Scorpio Blue 750 GB (WD7500BPVT). This Blue Edition is WD's answer to those looking for a reasonably fast, well priced 750 GB notebook hard drive. This week, we're taking a look at its newer Black Edition counterpart - the Western Digital WD7500BPKT. Being a Black Edition, a lot is expected from this drive in terms of performance, for these drives command a hefty premium over other Blue and Green edition drives. Additionally 750 GB and 1 TB options are new in the 2.5-inch form factor - notebook storage has already got a shot in the arm with the Blue Edition, let's see if it gets its speed fix too.

The Black Edition appears to be marginally thicker than the Blue Edition, but upon closer inspection this is not so. It is the heavier of the two drives however, and appears to be marginally better constructed, if the surface materials are any indication. The graphics on the sticker are black, but other than the obvious badging and the weight differential, one cannot tell the drives apart. The PCB is tightly integrated into the body - a flush fit - necessary to avoid it getting damaged by foiling with external surfaces. 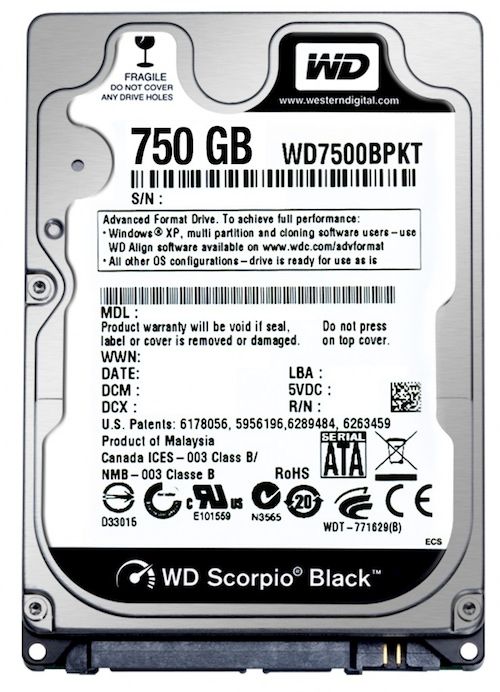 [RELATED_ARTICLE]Initially, we thought the additional weight was because of an additional platter. With an areal density of 375 GB per platter, the Western Digital Scorpio Black WD7500BPKT follows the same two-platter design as the Scorpio Blue WD7500BPVT. The cache has doubled - the WD7500BPKT has a 16 MB cache buffer. Additionally the platters spin at 7,200 rpm - this puts the WD7500BPKT in a league of its own as far as notebook drives go, since its platters rotate at the same speed as the much larger desktop drives. The smaller size does mean there is less space to dissipate heat, but as a smaller design, with smaller platters, and with a smaller actuator arm, and a read/write head that has a smaller distance to pick up data, the WD7500BPKT has the potential to be faster than some desktop 7,200 rpm drives.

The weight of the drive is 155 grams, 5 grams more than the Blue Edition. Western Digital rates power dissipation at 1.75 watts during a read or write operation, and an idle and standby consumption of 0.80 watts and 0.40 watts respectively. These figures are higher than the figures for the Scorpio Blue Edition, which are 1.6, 0.65 and 0.20 watts for read/write, idle and standby respectively. Incidentally, the warranty on this drive is five years, so you get an additional two years over Blue Edition drives.

To cut the suspense, the WD Scorpio Black 7500BKPT is lightning fast. Now don't get us wrong - an SSD it is not, and neither is it expected to be. But in terms of speed, we were surprised to see it edging out most regular 3.5-inch drives in all tests, but even the WD Black Edition 2 TB (WD 2001FASS) in sequential read and write tests. While it seems a bit slower than this drive in the theoretical benchmarks, in our real world tests, there was no deny its speed. It writes sequential data at an astounding 168.42 megabytes per second - which is faster than quite a few SSDs, and even faster than a 10,000 rpm Velociraptor. 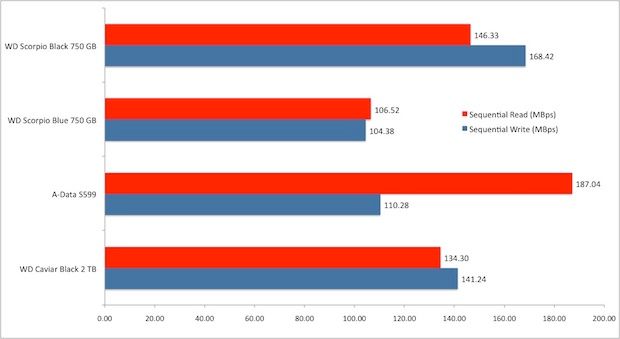 These are sequential read and write scores, in megabytes per second, using a single 4 GB .rare file. Note the almost magical write score of 168 MBps. This is one fast drive!

In fact, it took just 41.7 seconds to display a 1 GB image file in our PhotoShop test, just two seconds longer than the WD 2 TB Black Edition, that did it in 39.1 seconds.This is impressive for a hard drive, but not an SSD, as the S599 managed to complete this test in a mere 13.71 seconds. For some reason, SiSoft Sandra benchamarks rate this drive as a lot slower than what it is in real world scenarios. 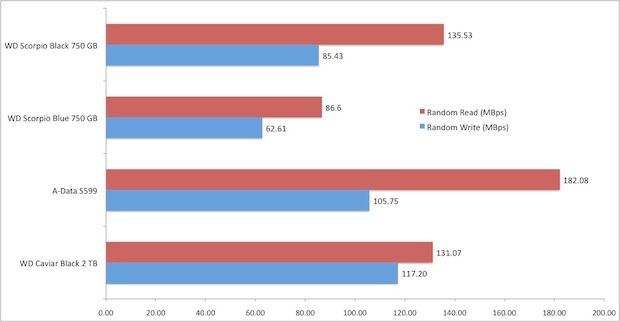 These are random read/write scores in MBps. Note the sharp performance drop in random writes compared to the sequential writes. This is where the desktop Black Edition marches ahead, on account of the larger cache (64 MB VS 16 MB). Also notice how the Scorpio Black can write at the same speed that the Scorpio manages to read at

Performance was excellent for a notebook drive, and if you want something faster, you'll probably have to opt for a good SSD. The minus was the heat production - with two platters spinning at 7,200 rpm the WD7500BPKT gets quite hot - temperatures can touch 60 degrees Centigrade, whereas the Scorpio Blue WD7500BPVT doesn't cross 50 degrees. Additionally, when used inside notebooks with more rigid bodies, like Apple's unibody Macbooks, there is noticeable vibration on the palmrest when the drive is in use.

The WD7500BPKT is a very fast drive. If you're looking for a lot of storage space for your notebook, and need performance as well, this is probably the drive to go for. Take a note of the heat issue, though with a five year warranty from Western Digital, you are covered. When WD mentioned its price, our jaws dropped - the recommended MSRP is Rs. 5,275, and we confirmed at least three times!

This is pretty unbelivable, and we have no way of verifying it because this drive is very new and hardly in stock anywhere. At this price, or near-abouts, it is a killer deal, since it's essentially cheaper than the Scorpio Blue WD7500BPVT, which is a much slower drive.