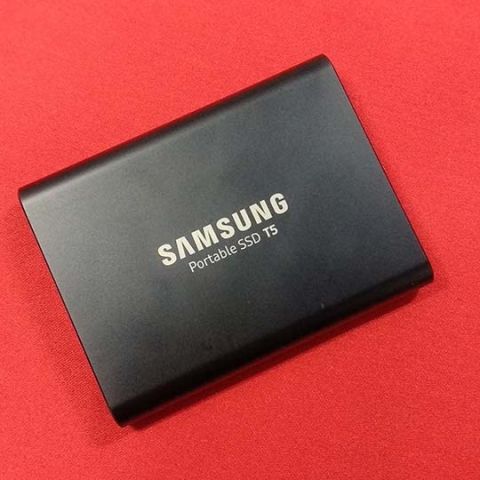 The Samsung T5 external SSD is a fine successor to the Samsung T3. There are quite a few improvements including higher-density packages, USB 3.1 Gen 2 support, TRIM support and official Android support. And when it comes to build quality, you’re getting a very rugged SSD but It’s not water-proof. Lastly, the T5 is a consistent performer which is a rare thing to see these days but quite common from Samsung. For the price of Rs.33,000 for the 1 TB SKU, the Samsung T5 is a bit on the pricier side but it’s got a performance to match that price.

There’s always the need for more data storage, no matter what the situation is. Before smartphone storage hit 32 / 64 GB, most of us still carried around a separate thumb drive, and if we wanted more space, then we’d carry an external drive. However, those bulky things hardly fit in your pocket so you’d have to spend more money to get the more expensive thumb drives. External SSDs are perfect for such scenarios since you get a lot of storage in a small form factor. And given that this is an SSD, you can the added benefit of really fast speeds.

The Samung T5 external SSD comes in a really swanky form factor which is just 5.7 cms wide and 7.4 cms  tall. It’s smaller than most mobile in the market right now and packs in up to 2 TB of space in the small space. 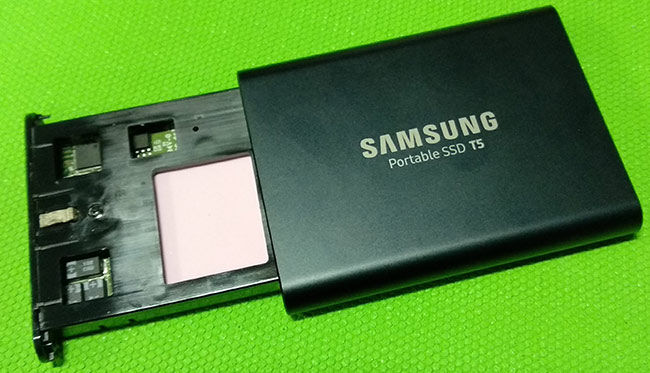 The Samsung T5 features an aluminium unibody with the USB 3.1 Type-C port on just one side. There’s even a blue activity indicator LED right next to the port that’s well hidden. There’s no cap for the Type-C port, something we’ve seen with other SSDs which helps towards the IP (International Protection Marking) rating. The T5 comes in 4 capacities with the 250 and 500 GB SKUs coming in blue colour and the 1 TB and 2 TB SKUs coming in black. 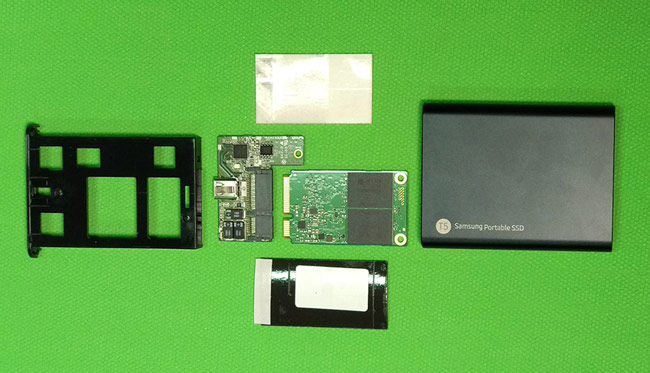 Taking the Samsung T5 requires quite a bit of effort and we’ll say, they’ve done a good job of packing everything together to prevent any untoward rattling. There’s a plastic frame onto which the PCB and the foam pads are attached. The foam is not thermally conductive, we say this because it does not make contact with the metal chassis. 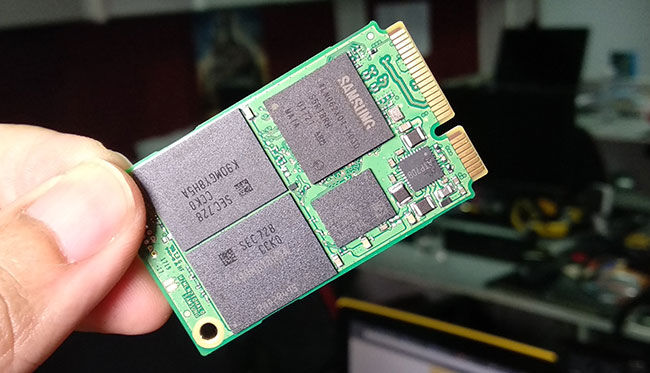 All the magic lies on this little mSATA card which has the Samsung MGX (S4LN062X01) controller that we’ve seen on the 850 EVO series as well. This being the 1 TB model, has 4 8-die 64-layer V-NAND (K9OMGY8H5A) packages for storage. Each hosting 256 GB of space. 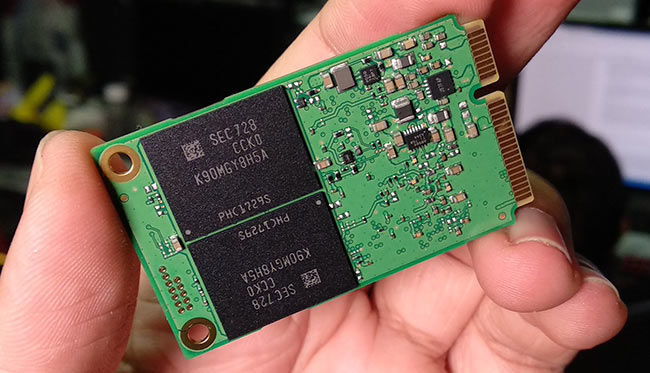 Compared to the Samsung T3, the T5 hosts a few key improvements. For starters, the T3 had 48-layer V-NANDs while the T5 has 64-layer V-NANDs. Then there’s the move to USB 3.1 Gen 2 from Gen 1. This is due to the (ASM235CM) mSATA-to-USB bridge. The T3 sported the ASM1153. Moving to USB 3.1 Gen 2 has resulted in the peak performance hitting 540 MBps. There’s also support for TRIM and official support for Android devices. 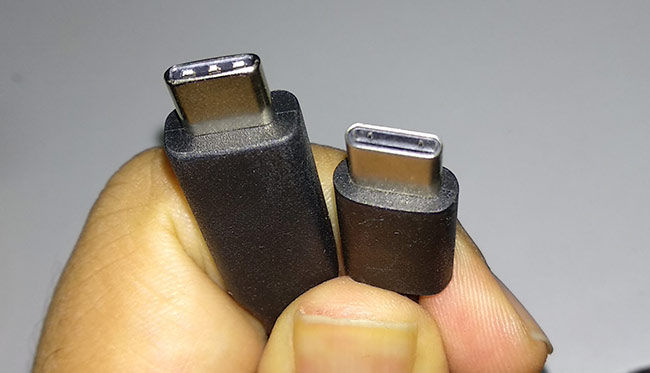 We say this because a lot of motherboards tend to have a thicker rear I/O these days which makes the USB mating a bit difficult. And we’re pretty certain that folks who like to use a case on their phones would prefer the same since they wouldn’t have to remove the case in order to plug the cable in. You can see from the image above, the T5’s cable is in the one on the left with the thicker plastic mould compared to an average Type-C connector on the right.
Don’t get us wrong, the included cable is quite rugged, something you’d want with a portable drive but the thickness makes it difficult to plug into your phone. Do note that you’ll have to format the SSD to FAT32 to use it with your phone. 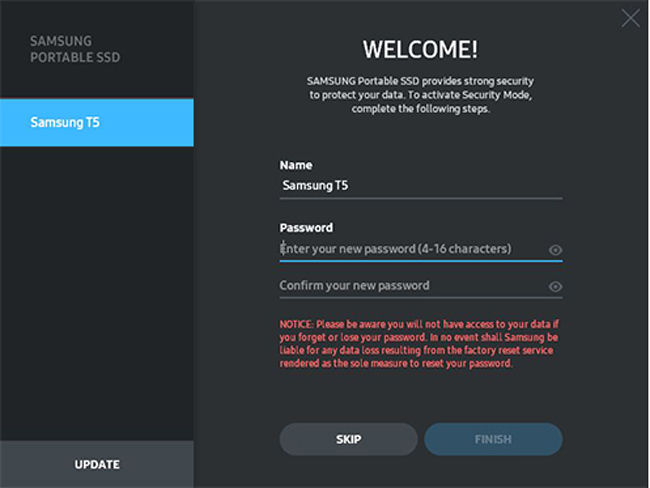 The included software is something most people tend to dismiss. It’s only good for encryption and letting you know what firmware the Samsung T5 is currently on. Aside from that, we didn’t find any need for the software.

In our benchmarks, we managed to get 490 MB/s during our write test and 516 MB/s in our read tests. That was our reacl world benchmark. With speeds like these you can even run an OS off the Samsung T5 and not tell the difference. In order to get these speeds, you will need a USB 3.1 Gen 2 port on whatever you want to connect this to. 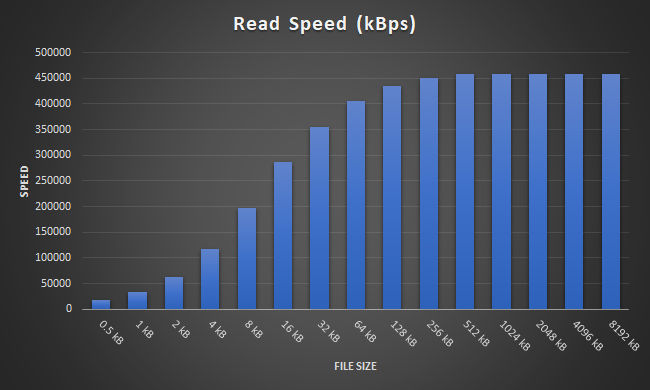 In our synthetic benchmarks, we found the peak read and write speeds to cap out at around 460 MBps for file sizes ranging from 512 kB to 8 MB. Anything lower and transfer speeds would start dropping. 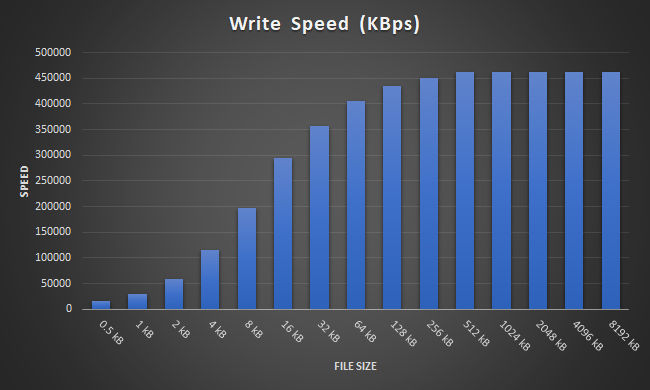 While the obvious thing you’d notice here is that the peak write speeds is the same as the read speeds. However, the important thing to notice is that the read and write speeds are very similar. This is not a common thing to see. Generally, the writer speeds lag by quite a bit since controllers aren’t that great or sometimes the included buffer isn’t fast enough but with the T5, that’s not the case. We should also mention that the controller on our test system is an ASMedia as well. We’re certain an Alpine Ridge controller would have resulted in better performance. Overall, the Samsung T5 is a very consistent performer with really high transfer rates.

The Samsung T5 external SSD is a fine successor to the Samsung T3. There are quite a few improvements including higher-density packages, USB 3.1 Gen 2 support, TRIM support and official Android support. And when it comes to build quality, you’re getting a very rugged SSD but It’s not water-proof. Lastly, the T5 is a consistent performer which is a rare thing to see these days but quite common from Samsung. For the price of Rs.33,000 for the 1 TB SKU, the Samsung T5 is a bit on the pricier side but it’s got a performance to match that price.