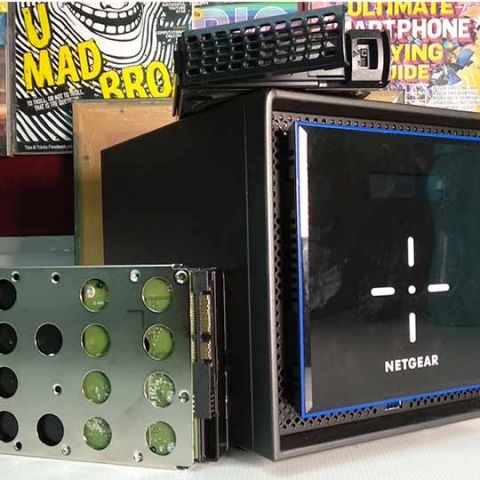 The NETGEAR ReadyNAS 424 sports really good build quality and boasts of a diverse set of features that make it sort of an all-rounder. The interface is quite simple to navigate even for new users and performance-wise it stands with some of the best 4-bay NAS devices out in the market today. Overall, the ReadyNAS 424 is a pretty great NAS aimed at the SOHO market.

The NETGEAR ReadyNAS 424 is part of the new lineup powered by Intel’s ULP Denverton SoCs. The ReadyNAS 424, in particular, has the Atom C3338 (2 cores, 2 threads) for all the heavy lifting. Compared to Avoton SKUs, the Denverton SoCs offer upwards of 70% improvement in certain benchmarks so we’re going to see a more consistent performance with a greater number of simultaneously connected users. Before we get into the actual performance numbers, let’s examine the unit.

The ReadyNAS 424 is built really well. It’s something we’ve seen that’s consistent with NETGEAR. The entire assembly is quite easy to take apart allowing for easy servicing. The front panel has a very clean look with buttons disguised to appear part of the design. You may take a while to understand how to navigate through the menu using these non-descript buttons but having reviewed a couple of NAS devices, we found it quite intuitive. First timers, will obviously feel a bit lost but there’s always the instruction manual for them. 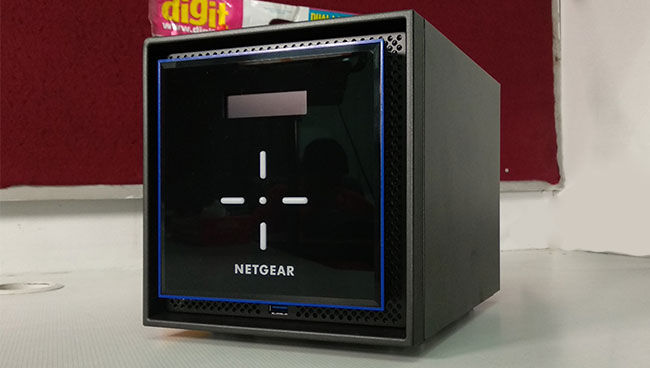 The USB 3.0 port is located inside the front panel shielding it from dust. The power button is also inside the bay door so that you don’t end up accidentally turn off the NAS. You can see plenty of cooling vents around the door which feeds into the bay and there are vents in the PCB at the back which then leads to the fan. Overall, the ReadyNAS 424 has a properly designed cooling system. 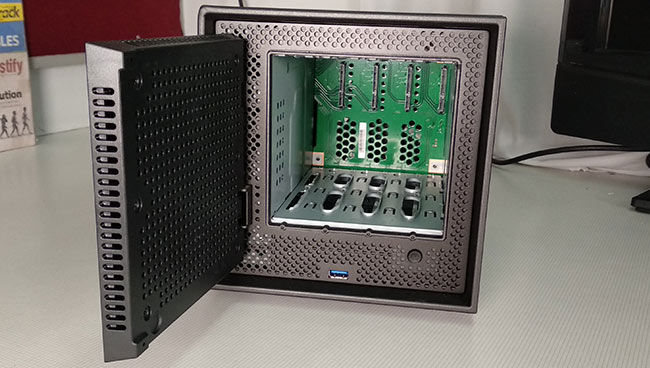 Since we’re talking about the cooling system, we might as well mention that the 120 mm (wrongly mentioned as 92 mm in the specs) cooling fan at the rear is manufactured by Delta. This is no low-end fan, the AFB1212VH is rated for 3100 RPM, 103.75 CFM of airflow and 44.5 dBA for noise level. This makes it a pretty powerful fan that’s quite silent as well. Each of these will cost you $15 should you buy them individually so they aren’t cheap either.

The external cage can be easily removed and you can see that the ReadyNAS 424 even has a hidden M.2 slot. We never bothered fitting an SSD in it to see if it works so that’s up in the air. 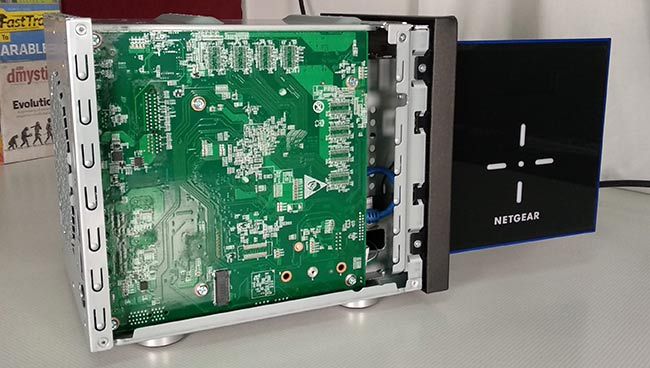 The other side is completely vacant except for a 12V fan connector that’s jutting out towards the rear. 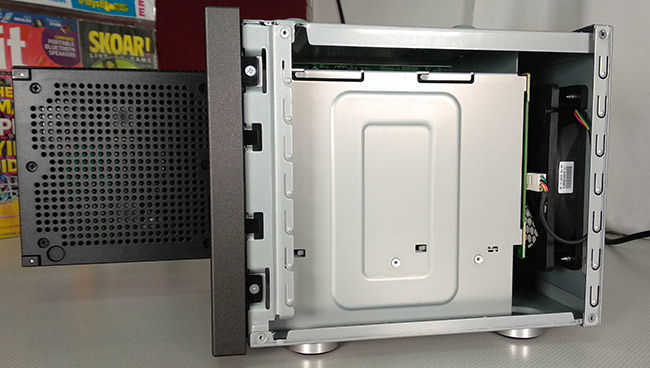 The rear panel comes off pretty easily as well. This is where we see the hidden UART interface. We can understand why NETGEAR would want to hide the UART from the consumer since there’s absolutely no reason for them to access the same. Enthusiasts can simply access it the same way we did. 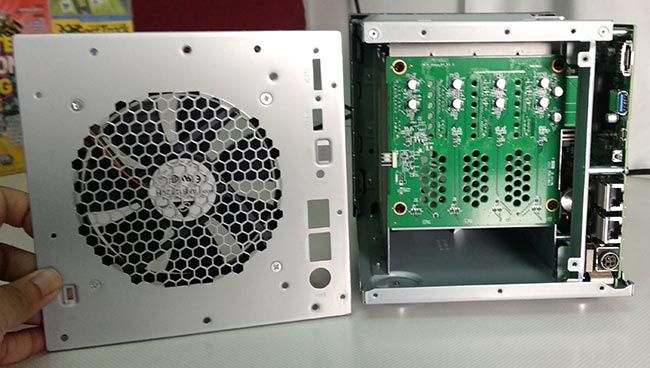 And lastly, let’s take a look at the mainboard. The Phison PS2251 USB 3.0 controller sits on a daughter board which makes it easy to service but we did find it rather odd. It would appear, that you can simply swap the daughter board for a different controller. 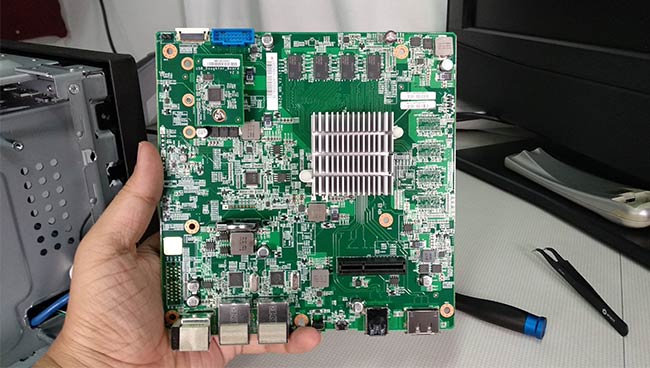 We can see the VRM circuitry is all over the place, the one for the USB controller sits right underneath the daughter board while the VRM for the RAM chips can be seen in the top right corner. Each Ethernet port has its own dedicated controller which in this case are two Marvell 88E1512. And bang in the centre of it all is the Intel Atom C3338. The only irksome thing about the PCB was the sole electrolytic filter cap which can be seen at the top right. It’s not going to conk off that early since it stands far from the power circuit but we’d rather have a couple of tantalums in its place.

Overall, we see a very-well built and easily serviceable chassis in the NETGEAR ReadyNAS 424. Everything from the inner cage to the external chassis is built using thick sheet metal, something that we don’t even see with PC cabinets these days.

Like most NAS out there, the ReadyNAS 424 is compatible with Windows, Mac and Linux based systems. Installation is tool-less and you can go up to 64 TB with the ReadyNAS 424 since 16 TB drives are now commonly available. Before installation, you should check with NETGEAR’s hard drive compatibility list to be sure. 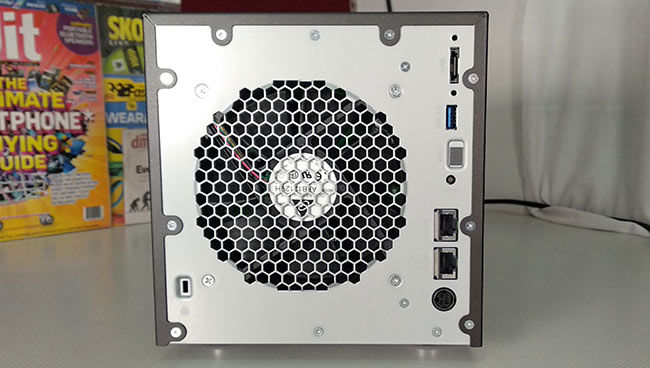 There are two USB 3.0 ports, one on the front and one on the rear, one eSATA port and 2x Gigabit Ethernet ports. We’re missing an HDMI port which could have been plugged into a TV but if you’re getting TVs now, you’ll end up with network connectivity so the HDMI port isn’t all that important anymore. It supports RAID levels 0, 1, 5, 6, 10 and in case you don’t feel like setting up an array, JBOD. 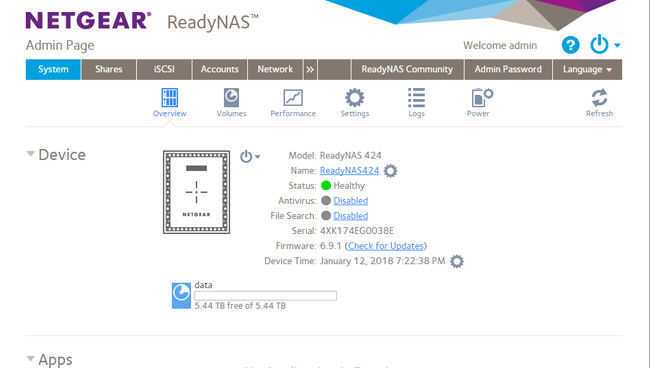 The ReadyNAS 424 is not just built for your home but also for SOHOs so it allows 1024 simultaneous connections. That’s pretty decent for most offices, given that you get 40-64 TB of storage. Setting the unit up is quite simple as well. There’s the simple URL method to hunt down the NAS as long as you are on the same network. You don’t have to hunt for the new IP on the network or download a piece of software separately. 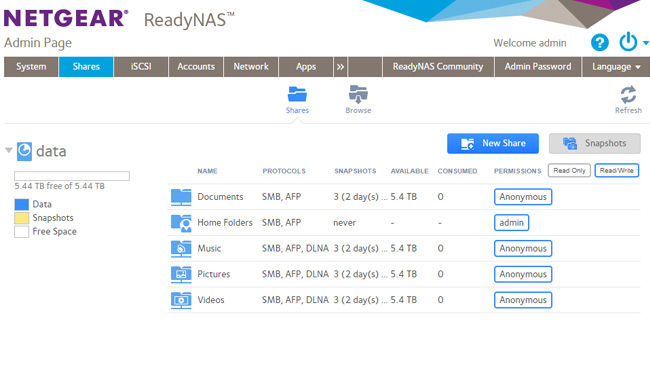 The UI is fairly simple to navigate with the homepage listing your device’s live metrics along with all the running apps. We had Plex running off the ReadyNAS 424 and we noticed absolutely no hindrances with the overall user experience. Adding new share folders and switching folder permissions are way easier than before.

Let’s get the cooling performance out of the way first. We had 4x 2TB WD Black drives running in the ReadyNAS 424 for quite a while before setting it through the paces. At peak activity, we only saw the unit running at 36 degrees Celsius. That’s while we were streaming 4 different movies off it. Performance wise, we’re looking at file copy speeds of about 106 MBps which is practically as high as can be on a GbE network. As for trace-based tests such as the NASPT content creation test, we managed to get 11.3 MBps. Transferring data via USB 3.0 was equally impressive as well with peak FAT write speeds hovering around 88 MBps.